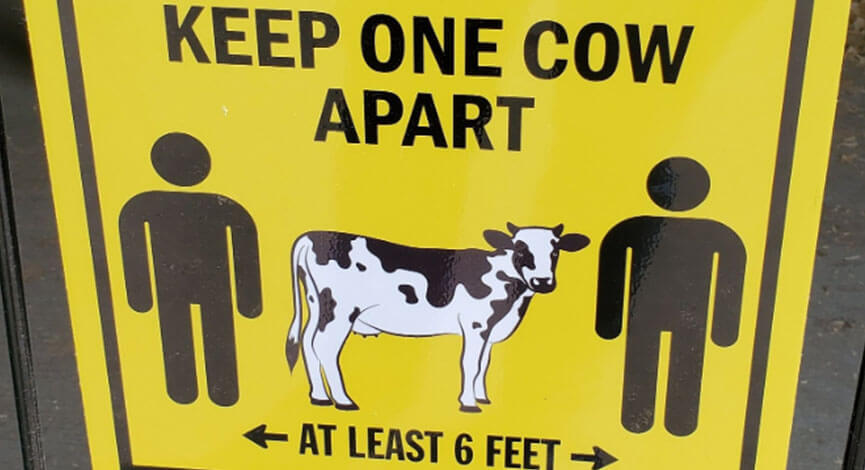 This was among the many signs at the 2020 Pickaway County Fair encouraging fairgoers to socially distance. Photos by Tyler Buchanan.
ShareTweet

For the third time, Gov. Mike DeWine has vetoed a bill from the Ohio legislature targeting the state health department’s ability to respond to a pandemic.

There are no county fairs scheduled until this summer. Lawmakers sought to give organizers assurance their 2021 fairs would be held as normal following a season in which most fairs were limited in scope or canceled entirely.

DeWine said Tuesday his hope “as a lover of fairs” is for all 88 counties to enjoy a full fair this coming year. Citing the unpredictability of the COVID-19 pandemic, DeWine said the safety of such large gatherings cannot be guaranteed months ahead of time.

The governor committed to working with county fair boards to find an appropriate path forward as the calendar reaches the spring and summer months.

During the spring of 2020, the Ohio Department of Health prohibited large social gatherings in order to slow the spread of COVID-19. In those early months of the pandemic, some county fair boards decided to cancel their 2020 events, while others held out hopes of holding their annual community tradition.

In June, DeWine gave the fair boards the go ahead — so long as organizers followed a number of safety measures. Counties which decided to host 2020 fairs were offered grant funding up to $50,000 to pay for these health mitigation requirements.

The Pickaway County Fair, held later that month, was among the first major gatherings in Ohio since before DeWine declared a state of emergency in March. Visitors were greeted with signs reminding them to maintain social distancing: “Keep One Cow Apart.”

The fair season was scheduled to run through October, but the DeWine administration decided in late July to curtail fair events for the rest of 2020.

A health order dated July 30 limited any subsequent gatherings to being “Junior Fair Activities” only. This allowed for 4-H animal shows to continue, but prohibited games, rides and grandstand entertainment.

At the conclusion of fair season, Republican state senators Frank Hoagland of Mingo Junction and Tim Schaffer of Lancaster introduced a bill to rescind the stricter health order.

“It is essential that we reopen Ohio and allow local officials to make their own decisions based on the needs of their counties,” Hoagland said in committee testimony.

Rod Arter, president of the Ohio Fair Managers Association, told lawmakers that fair boards operated in a “severe deficit” without revenue generators such as rides and entertainment.

“Our county fairs prioritize the safety of our participants and attendees, but we need consistency to be able to plan,” Arter said.

Senate Bill 375 also would have created an “Agriculture Society Working Group” to review and recommend safety protocols for county fairs and other Ohio festivals.

The bill was approved along party lines in mid-December, with Republicans in favor and Democrats against.

As he did with two prior bills curbing the authority of ODH, DeWine decided to veto SB 375.

“We have no idea where we’re going to be as a state when our first fair kicks off this year,” DeWine said Tuesday in defending his decision, noting that the vaccination effort is underway.

“I cannot sign something that automatically knocks (the health order) out,” he said.

DeWine said his administration would work with fair organizers and other political leaders to determine how to conduct fairs safely in 2021. Nevertheless, the Ohio Fair Managers Association expressed disappointment in the governor’s decision.

“At this point, work continues as we strive to ensure that county and independent fairs will indeed have the opportunity to move forward all aspects of their fair,” the organization wrote in a statement to Facebook.