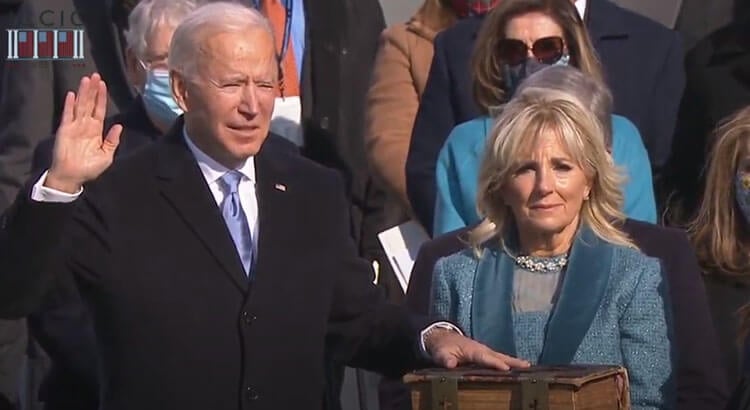 Joe Biden became the 46th president of the United States Wednesday morning, when he took the oath of office while standing on the same platform where insurrectionists swarmed just two weeks ago as they sought to prevent Congress from certifying Biden’s victory.

That violent mob of rioters damaged the U.S. Capitol, attacked police officers, and sparked security concerns ahead of Wednesday’s transition of presidential power. But the traditional outdoor ceremony went on, albeit with a much more limited audience than usual due to the coronavirus pandemic and security fears.

Instead of looking out at a sea of supporters, the former vice president and longtime senator from Delaware spoke before members of Congress seated in socially distanced chairs, a massive force of National Guard members, and a display of flags stretching to the Washington Monument representing those who fell victim to COVID-19 and cannot be there in person.

Vice President Mike Pence was in attendance, but for the first time since 1869, the departing president did not watch as his successor took the oath.

President Donald Trump and his wife, Melania, left the White House hours ahead of Biden’s swearing-in ceremony, with Marine One flying past the Capitol as it ferried him to his flight home to Florida.

Amid that bleak backdrop, there was an historic first: Kamala Harris was sworn in as vice president, becoming the country’s first woman, and first Black and South Asian woman, to hold that role.

Harris will become the tie-breaking vote in a Senate that will be evenly divided between Democrats and Republicans when two new senators from Georgia and one from California are sworn in Wednesday afternoon.

The challenge before Biden and Harris is a stark one: healing a country that’s economically strained, rampaged by an unchecked virus, and facing ever-deepening political divisions.

“To heal, we must remember,” Biden said Tuesday evening during a memorial event to honor the 400,000 Americans who have died from COVID-19. “It’s hard sometimes to remember, but that’s how we heal. It’s important to do that as a nation.”

Trump, speaking to a small group of supporters before his final ride on Air Force One, thanked supporters and touted his administration’s accomplishments before wishing “the new administration great luck and great success.”

“I hope they don’t raise your taxes, but if they do, I told you so,” Trump said, concluding with a promise that he “will be back in some form.”

As Trump exited Washington, Biden headed to a church service with top congressional leaders from both political parties.

He is expected to immediately embark on his policy agenda, with plans to sign more than a dozen executive orders and other directives Wednesday afternoon.

Those orders will require mask-wearing on federal property, and extend pandemic-spurred protections against evictions and foreclosures, and a pause on student loan interest and payments.

Biden also will begin to undo Trump’s immigration actions, reversing his ban on travel from some Muslim-majority countries; halting construction of the border wall; bolstering the Deferred Action for Childhood Arrivals program; and ending the enhanced immigration enforcement under the Trump administration.

He also will have the U.S. rejoin the World Health Organization and the Paris Climate Accord, and begin reviewing the Trump administration’s rollbacks to environmental regulations.

As a precaution, more than 25,000 National Guard members are stationed around the Capitol and throughout D.C., a number that grew dramatically following the Jan. 6 attack on the U.S. Capitol by a violent mob of pro-Trump supporters. Lawmakers, staffers and journalists had to barricade themselves for hours until law enforcement officers were able to secure the building.

Even after that horrifying event, Biden and his transition team have said they feel secure in continuing to hold the swearing-in ceremony outside on the West Front of the Capitol, its traditional location.

Sen. Roy Blunt, (R-Mo.), and chairman of the Joint Congressional Committee on Inaugural Ceremonies, told reporters Tuesday that he felt good about the security plans in place for Wednesday’s ceremony. He added that four years ago, when he held the same ceremonial role, the best moment for him was “when everybody got back inside.”

“It’s clearly always a moment of, where our government is at its most vulnerable, but also an important moment where we project our strength as a democracy,” Blunt said.