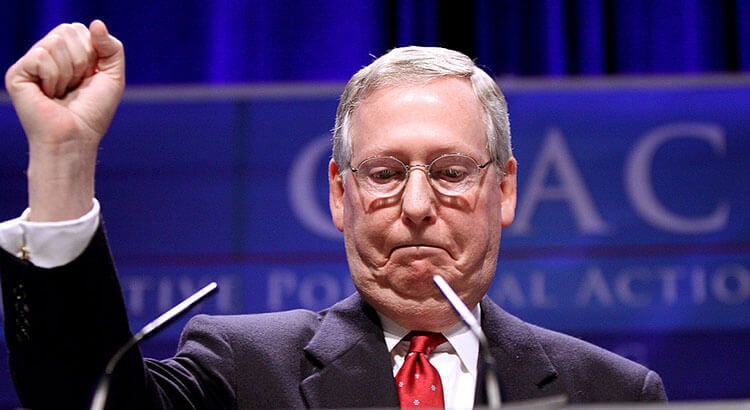 A wrongful death lawsuit filed in connection with a Tyson meat packing facility in Iowa alleged that managers secretly took bets on how many employees would get sick from COVID-19.

Tyson fired seven managers at the Waterloo pork processing plant following an independent investigation into the betting allegations and a wave of national publicity.

But labor advocates say that suit and others like it would have little chance of success in court if Republicans in Congress succeed in passing legislation that would shield businesses from pandemic-related lawsuits.

Senate Republicans dropped their insistence that a liability provision be included in a bipartisan COVID-19 relief package that could pass Congress as soon as this weekend.

But union advocates worry that the measure could spring back to life next year, arguing that it would harm workers and undercut the incoming Biden administration’s plans to control the pandemic.

If passed, a liability shield provision championed by a senior member of the Senate GOP would prevent workers and consumers from bringing lawsuits against employers who don’t take proper safety steps to limit exposure to the virus.

The AFL-CIO wrote in a Dec. 12 letter to senators that the provision by Texas Sen. John Cornyn would also prevent states from stepping in with their own enforcement of workplace standards to keep employees safe from coronavirus exposure.

“The draft proposal specifically bars enforcement of state occupational health and safety standards,” wrote William Samuel, the director of government affairs at the AFL-CIO. “So states that have adopted strong OSHA standards to protect working people from the virus in the absence of federal action, such as Virginia and California, would be prevented from enforcing them.”

The liability shield language is a redline issue for Republicans, who for months have argued that companies, hospitals, universities, local governments and other businesses need protection from customers and workers who could potentially flood them with COVID-19 related lawsuits.

Republicans say such shields are routine. “There is Democrats’ apparently strong opposition to enacting any kind of legal protections to aid the reopening—targeted, temporary liability reforms are a common feature of national emergencies or strange events,” Senate Majority Leader Mitch McConnell (R-Ky.) said during a floor speech on Dec. 11.

Democrats and labor groups have pushed back, pointing out that the Cornyn provision creates a high bar for workers to prove an employer willfully endangered or exposed them to the virus. Cornyn introduced his bill in July, the Safe to Work Act, that would shield businesses from COVID 19-related lawsuits, and Republicans wanted to attach the Cornyn bill as a section in the latest relief package.

Democrats say the liability fight is why relief has gotten held up to the end of the year. “At a time of such great crisis, there is one reason why America’s two major parties have not gotten together during the time of acute national emergency, and that is because the Republican leader has demanded a partisan poison pill, a sweeping corporate liability shield be included in any legislation, otherwise he won’t let it pass,” Minority Leader Chuck Schumer (D-N.Y.) said on the Senate floor on Dec. 11.

That would mean that if the Biden administration wants to direct OSHA to implement COVID-19 standards or for the agency to conduct any enforcement, the provision would prevent that from happening for an extended period. And any discrimination cases on questions such as race, sex and disability that have to do with coronavirus would also be on hold for two-and-a-half years.

The liability shield question has dogged emergency relief talks. A draft of a proposal for emergency relief from a bipartisan group earlier this month would also establish a “nationwide gross negligence standard for COVID-19 exposure, medical malpractice, and workplace testing claims.”

Judy Conti, the government affairs director at the National Employment Law Project, said that a nationwide standard would require workers to have the highest proof of burden for “gross negligence.”

“You would have to essentially prove that employers knew that what they were going to do would cause people to die, but they did it anyway,” Conti said.

The debate over liability comes as workers in places ranging from meatpacking plants in Pennsylvania to Amazon warehouses are filing suits against their employers for not following COVID-19 guidelines or providing proper protective equipment.

In Congress, the liability fight has caused so much controversy that the bipartisan group of senators split their COVID-19 relief package into two parts. One part included aid both parties agreed on, such as extensions of unemployment benefits, food assistance, a paycheck protection program, COVID-19 testing and vaccine distribution.

The other part was $160 billion in aid to state, local and tribal governments— strongly backed by Democrats—and the liability shield for companies that Republicans wanted. It now appears neither will make it into a final relief deal.