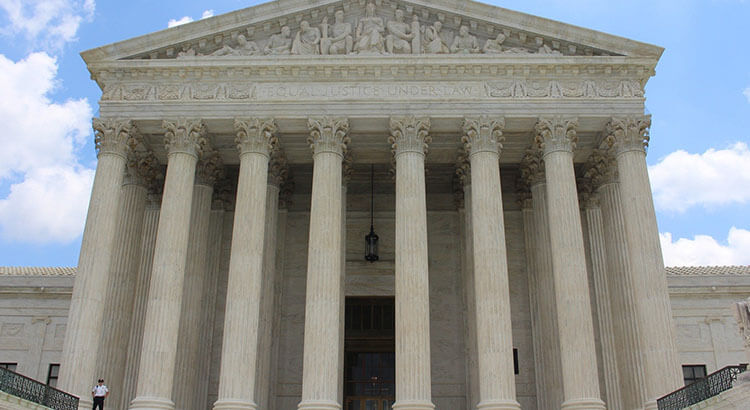 WASHINGTON — The Supreme Court on Friday turned aside a Texas lawsuit that sought to derail the presidential election results from four battleground states, despite pressure on the justices from President Donald Trump on social media.

“Texas has not demonstrated a judicially cognizable interest in the manner in which another State conducts its elections,” according to the unsigned court order. “All other pending motions are dismissed as moot.”

A second paragraph from Justice Samuel Alito that was joined by Justice Clarence Thomas stated: “In my view, we do not have discretion to deny the filing of a bill of complaint in a case that falls within our original jurisdiction. See Arizona v. California, 589 U. S. ___ (Feb. 24, 2020) (Thomas, J., dissenting). I would therefore grant the motion to file the bill of complaint but would not grant other relief, and I express no view on any other issue.”

More than half of the Republicans in the U.S. House — 126, with 20 added on Friday after they were left out earlier by a “clerical error” — had signed on to back a brief put forth earlier this week by Texas Attorney General Ken Paxton. Paxton sued to invalidate the voting results of Michigan, Georgia, Wisconsin and Pennsylvania.

Many Republicans in Congress have refused to directly state whether they believe  Trump was defeated by President-elect Joe Biden on Nov. 3. Some have instead said that they support the president’s decision to challenge the election results in the courts.

Paxton alleges that officials in Michigan, Georgia, Wisconsin and Pennsylvania illegally changed voting laws, which caused voting irregularities and changed the outcome of the 2020 presidential election.

Trump made similar allegations on Twitter and on Friday he told the justices what they should do.

“If the Supreme Court shows great Wisdom and Courage, the American People will win perhaps the most important case in history, and our Electoral Process will be respected again!,” he tweeted.

Trump earlier this year nominated Justice Amy Coney Barrett to the high court, shifting it to a conservative majority.

Due to the pandemic, many states lobbied voters to submit absentee ballots, so Americans could maintain safety guidelines.

The FBI, U.S. Attorney General and Department of Justice have repeatedly stated that there is no evidence of voter fraud or election irregularities. On Monday, members of the electoral college will meet in statehouses to cast their ballots, confirming Biden’s win.

Members of the U.S. Senate on Friday failed to mount a drive to back the Texas suit similar to that of the House GOP.

Sen. Susan Collins, (R-Maine), expressed doubt to reporters on Capitol Hill that the lawsuit would succeed.

“I don’t think it’s likely to prevail given what the Supreme Court did in the Pennsylvania case, but I’m not familiar with the details of the lawsuit,” she said, according to pool reports.

Sen. Josh Hawley, (R-Mo.), told reporters that the Supreme Court could possibly find that the case has no standing.

He added that there’s not an attempt among Senate Republicans to do the same.

“My guess is it’s just nobody here sort of rounded up the troops,” he said. “Usually the way these things work on the amicus brief side… is somebody takes the lead and then says ‘I’ll write it and then I’ll get people to sign on.’ This was a pretty short fuse thing.’”

But some Senate Republicans said that the lawsuit is baseless and that states should not attempt to meddle in the affairs of other states.

“I’m never surprised by the House of Representatives,” Sen. Lamar Alexander of Tennessee said, according to pool reports.

Earlier Friday, he appeared on NBC’s “Meet the Press,” where he questioned the legal argument underlying the Texas suit.

“I mean, our position, my position, Republicans believe that states are in charge of elections. And Texas is a big state, but I don’t know exactly why it has a right to tell four other states how to run their elections,” said Alexander.

A senior New Jersey Democrat, Rep. Bill Pascrell, chastised House Republicans who supported the Texas suit. Pascrell called for Speaker of the House Nancy Pelosi (D-Calif.), to not swear in the returning and new GOP members who signed the brief into the 117th Congress.

“Simply stated, men and women who would act to tear the United States government apart cannot serve as Members of the Congress,” he said in a statement.