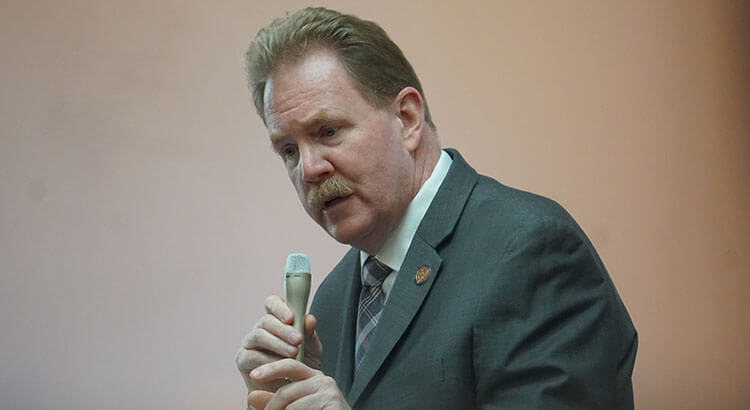 Two House Democrats, both in their waning days as state lawmakers, have been hospitalized with COVID-19.

Reps. John Rogers, D-Mentor-on-the-Lake, and John Patterson, D-Jefferson, both said in interviews they’ve been hospitalized with the disease caused by the new coronavirus.

They both attended a Dec. 2 House Finance committee meeting in which at least two other lawmakers who attended (GOP Reps. Gary Scherer, R-Circleville, and Rick Carfagna, R-Genoa Township) have since tested positive for COVID-19, the disease caused by the new coronavirus.

The precise source of the House outbreak is unknown. However, as the Ohio Capital Journal previously reported, GOP Rep. Steve Hambley, R-Brunswick, attended the Dec. 2 House Finance meeting after testing positive for COVID-19 on Nov. 22 and Nov. 28.

Patterson said that he has been diagnosed with pneumonia, a respiratory complication of COVID-19, and was hospitalized Monday for treatment.

“I can tell you that this is very real and for me, now, it’s very personal,” Patterson said from his hospital bed Tuesday.

Patterson said physicians caught the pneumonia early, thanks to the persistence of his wife, who advised him to get checked out. He has not been put on a ventilator or supplemental oxygen.

He said Rogers also urged him to get treatment.

Via text message, Rogers said he has been hospitalized since Sunday afternoon. He said he feels winded and it’s hard to breathe, but “not as labored as it was.”

He said he was diagnosed with pneumonia, and his medical team is trying to wean him off of supplemental oxygen. He said he has been feverish, though this is settling down. The headaches still linger.

“Gaining some strength back but still very weak, difficult getting out of bed and wobbly on my feet,” he said. “Doc says I will likely be here through the week as they are giving me a variety of meds including an anti-viral medication [intravenously]. On a positive note, I could taste the salad and coffee now, so that’s a good sign I guess.”

Patterson said it only makes sense for him to have contracted it while working, because otherwise he’s been practicing social distancing and staying home.

“There’s nobody up here that I’d run into, so I have to assume that it was in the Statehouse,” Patterson said.

Patterson said he felt his duty as a public servant obligated him to be transparent about his diagnosis, and others in the Statehouse and elsewhere should feel the same.

“Out of deep respect and concern for all and putting others ahead of self, I think it wise that we follow the directives,” he said.

Democrats have criticized the Republicans, who control the chamber, for weak infection control protocols and a secretive and porous contact tracing system when members or staff are infected.

All Democrats and some Republicans wear masks during legislative business, though many House Republicans still refuse.

On party line votes, Republicans have voted down mask mandates in the chamber for members and staff on multiple occasions.

Taylor Jach, the spokesperson for House Speaker Bob Cupp, did not respond to phone calls or emails for comment on Tuesday.