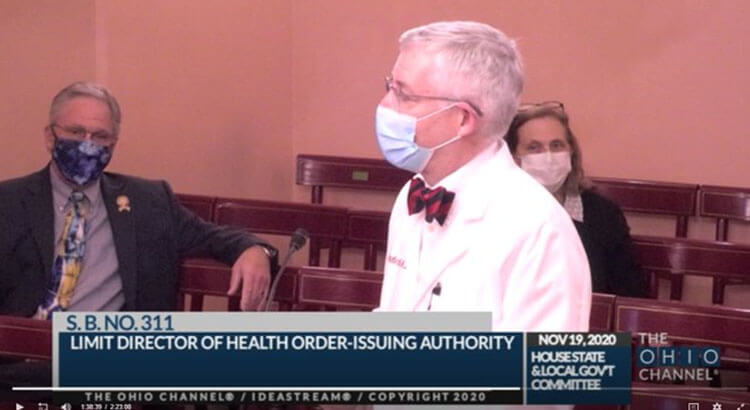 Ohio Hospitals have been strained for months by the coronavirus. But unlike in some other parts of the country, that hasn’t prompted them to tell people who would have been admitted earlier in the pandemic to stay home, officials said Thursday.

Daily numbers of new coronavirus cases have appeared to be levelling off over the past week, but they’ve done so at rates that are much higher than earlier in  the pandemic. That — coupled with the fact that covid often results in lengthy stays — has crowded Ohio hospitals as cold weather has driven people inside and accelerated the spread of the disease.

“There’s nothing to be happy about when we look at these covid numbers,” Gov. Mike DeWine said during his Thursday coronavirus press conference.

The governor allowed that the Thanksgiving “bump” — an increase due to people traveling and spending the holiday with family — was less than feared. He chalked that up to better compliance with stronger mask-wearing orders.

But the governor noted that the situation is still far from good.

“A fourth of our hospital population is a covid patient,” DeWine said, adding that the situation is even worse in intensive care units.

Facing strained capacity elsewhere in the United States, hospitals have responded by not admitting covid patients that they would have earlier in the pandemic, according to multiple accounts.

“What is happening is pretty simple: Because hospitals are filling up, they are admitting fewer and fewer people. Any doctor or nurse will tell you that as the demand for beds soars, the threshold for admission rises with it,” Ashish K. Jha, dean of the Brown University School of Public Health, wrote in a Dec. 7 column published by the Washington Post.

That’s not what’s happening in Ohio, said Bruce Vanderhoff, medical director for the Ohio Department of Health. Covid patients are being cared for at home, but not because doctors don’t have room for them at the hospital, he said.

“Even before covid started, our health systems were looking very actively at ways they could care for more and more patients outside the hospital setting,” Vanderhoff said, explaining that things like monoclonal antibodies and improved “hospital-at-home” have made that possible with coronavirus patients.

“For patients that really can be safely cared for outside the hospital, they’re able to avoid an unnecessary hospitalization,” Vanderhoff said. “So I don’t think it’s true… that (hospitals are) consciously not bringing someone in that they previously brought in unless they now feel they’ve got a better way of treating them that keeps them out of the hospital.

“I’ll tell you this: Whenever a doctor can care for somebody outside the hospital, they prefer to. It’s better medical care.”

That’s probably good news in view of some other highlights DeWine reported on Thursday.

He said every one of Ohio’s 88 counties has an an infection rate that’s triple the U.S. Centers for Disease Control and Prevention’s threshold for a “high incidence” designation. Also, despite extra staff, county health departments are having a hard time keeping up with contact-tracing.

“Our health departments are overwhelmed,” the governor said.