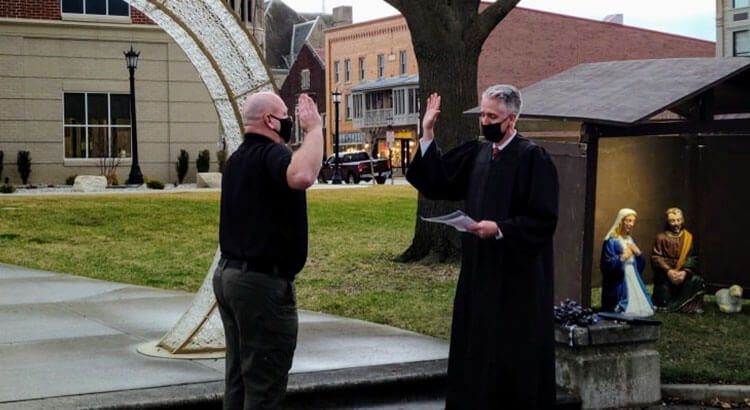 Tiffin, Ohio — Fred Stevens was sworn-in as Seneca County Sheriff on Wednesday by Judge Jay Meyer in preparation for his transition into his new role on Jan. 1.

Stevens, who previously served as chief of the Tiffin Police Department, won the Republican primary race for the top job at the sheriff’s office earlier this year, and went on to run unopposed in the November general election.

Stevens was initially due to begin his term on January 4, but current Sheriff William Eckelberry informed the Seneca County Commissioners his last day would be December 31.

Therefore, the commissioners on Tuesday authorized Stevens to be appointed as the acting sheriff effective January 1, before he officially becomes full-time sheriff on January 4.

“Congratulations to Fred Stevens on being sworn in as Seneca County Sheriff by Judge Jay Meyer today in front of the Justice Center,” Tiffin Mayor Aaron Montz said. “I have no doubt Sheriff Stevens will perform the duties of sheriff with complete respect and dignity. Excited to work with you for years to come, Fred!”