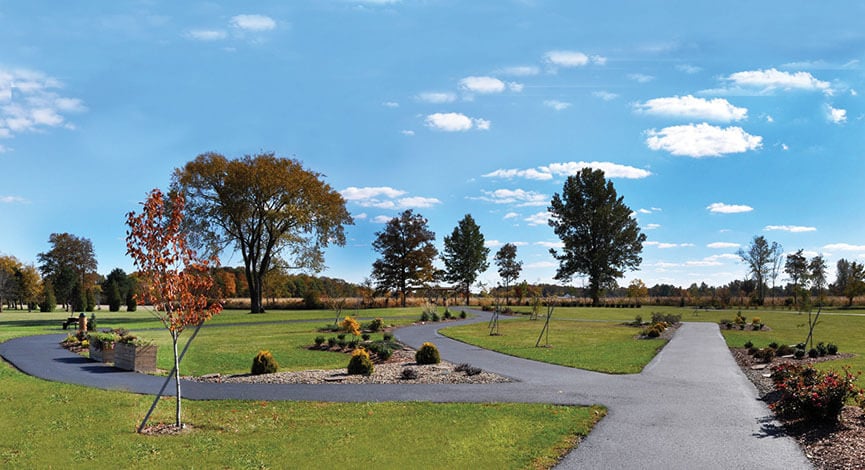 Tiffin, Ohio — The Seneca County Board of Commissioners applauded state legislators for their support of the Opportunity Park improvement project Thursday morning. The project, which was prioritized by the commissioners as a project to seek state capital funding for, could receive $200,000 through Senate Bill 310, which is being considered by the state legislature.

The commissioners were joined by city of Tiffin, Eden Township, Seneca County Opportunity Center and Seneca County General Health District officials in penning letters of support for the project.

The park, which is located near the Opportunity Center school, is an inclusive area that will become home to recreational opportunities for county citizens.

On Jan. 8, the commissioners sent a letter to State Rep. Bill Reineke and State Senator Dave Burke asking for their support in seeking state funding for Opportunity Park.

The letter states, “Currently, Opportunity Park is the only park solely dedicated to those with special needs. By moving forward, we would improve this offering and raise the quality of life of many.

“Another benefit of the project is that it would satisfy an important portion of our active transportation plan. The plan was a multi-jurisdictional effort and was endorsed and adopted by the city of Tiffin. The park would help provide a safe pathway to cross US 224, a major highway that runs through our county. One of our priorities as a board has been to offer more recreational opportunities for our residents and this project would help to accomplish that.”

Commissioner Shayne Thomas, who championed the project, was elated by the potential for state funding. “Opportunity Park will be another prime example of stakeholders working together on a shared vision. Building an inclusive park for the community to enjoy will be celebrated for generations. Hats off to Representative Reineke for securing the lynchpin funding needed to make this plan a reality,” he said. In other business, the board tentatively approved a $17.9 million General Fund budget, while also adopting the non-General Fund budget, including the capital projects line.

County Administrator Stacy Wilson said departments initially requested a General Fund budget of about $18.4 million. Since the county’s budget commission certified revenue for 2021 at $17.5 million, the commissioners wanted to reduce the projected expense figure to approve a balanced budget.

Proposed cuts included removing travel and equipment expenditures from the General Fund, bringing Thursday’s proposal in at about $17.9 million. This figure includes an additional $300,000 commitment to Seneca County EMS.

The board unanimously agreed to approve the General Fund budget at this figure, as long as the Seneca County Budget Commission makes amendments to its revenue estimate for 2021.

Thomas said he believes the commission, which meets on Dec. 22, may increase revenue estimates because of some new data points. These points include unexpected revenues such as the higher sales tax collection figure a larger than expected rebate of Bureau of Workers Compensation.

Board President Mike Kerschner said the commissioners plan to revisit the General Fund budget if the budget commission does not make any amendments, to ensure the passage of a balanced budget.

Wilson, in conjunction with Building & Grounds Maintenance Supervisor John Logsdon, presented more than $2.5 million of capital projects that have been deferred in previous budgets.

Commissioner Anthony Paradiso said it was important to invest in long-term capital improvements and to focus on the many deferred maintenance projects that are necessary across the county.

Prioritized projects include replacing the County Services Building wall and making the entrance Americans with Disabilities Act accessible and upgrading the roof on the Department of Job and Family Services building.

During new business, the board approved all resolutions from the pre-meeting release and also approved: