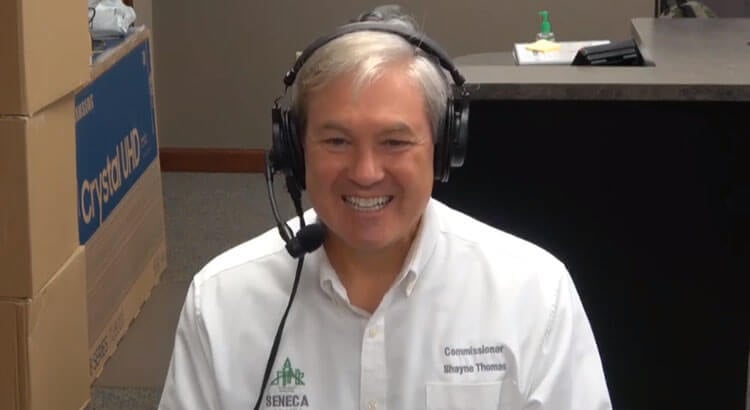 Tiffin, Ohio — Seneca County Commissioner Shayne Thomas is reflecting on his time in office with a new video podcast series, as he prepares for his term to come to a close at the end of the year.

Thomas was elected to the Seneca County Board of Commissioners in 2016. He decided against running for re-election to the board, instead throwing his hat into the ring for the 88th Ohio House district Republican primary. Thomas lost the three-way primary race earlier this year to controversial Baptist preacher Gary Click, who went on to win the general election in November.

Jimmy Flint, the county’s public relations coordinator, interviewed Thomas for the podcast, which will be released in segments on the Seneca County Commissioners Facebook page.

The first segment, released Wednesday, features Thomas discussing some of the board’s accomplishments over the past four years that he is most proud of.

“One of the things that I think we had a renewed emphasis on was just inclusion. In county government, in the community, and you know, we’ve done a lot of nice things that sent that signal,” Thomas said.

“The other big theme that I’m really proud of — and this isn’t Shayne, this isn’t any single individual — this is everybody. And that’s the spirit of cooperation and collaboration. You know, sometimes it’s strained. It’s hard work. Especially when you have something controversial like wind [turbines], and you know, everybody’s just ducking for cover… It’s hard to hold onto those relationships,” Thomas said in the segment.