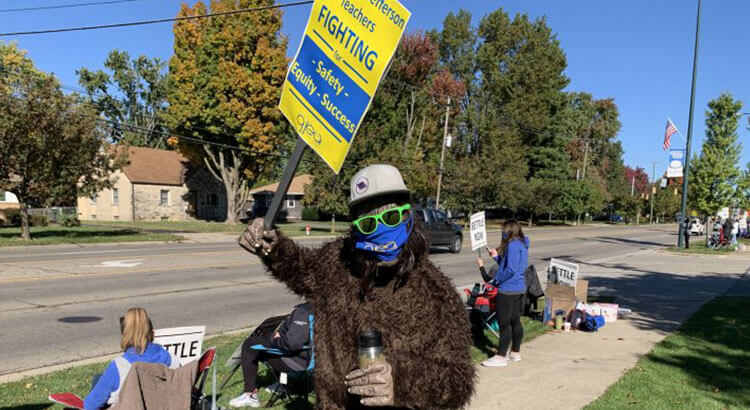 A Gahanna-Jefferson Education Association teacher opted to arrive in costume for the first day of a strike outside Gahanna Lincoln High School. By Jake Zuckerman.
ShareTweet

Ohio teachers are adapting to COVID-19 learning, while also fighting for wages and benefits that are lower than professionals with similar education and experience.

Teachers from across the state shared their experiences in an event hosted by the progressive think-tank Policy Matters Ohio.

Tati Weaks, of the Greenfield Exempted Schools, which serves portions of Fayette, Highland and Ross counties, said investment in the community is an important part of being a teacher. But in an area that lost thousands of jobs when DHL pulled out of the Wilmington Air Park more than a decade ago, and saw the wealth in the area change to poverty as factories went elsewhere, she said keeping teachers engaged in the area isn’t easy.

Despite the fact that Wilmington Air Park has had investment since DHL left, the roller coaster of success and loss creates stress with a state public school funding system based on property wealth.

Experts call the lower wage that teachers receive compared to other professionals with similar education and experience a “wage penalty.”

“This is something where there’s been an attack on teachers,” said one author of the study, EPI fellow Lawrence Mishel, during the Policy Matters discussion. “We have not been putting in the resources, and this is something we really need to do to guarantee children have the professionals that they need.”

That lowering came from “widespread strikes and other actions by teachers in 2018 and 2019,” the study stated.

In Ohio, the wage penalty stands at 15.2%, according to the Economic Policy Institute.

Teachers actually received a wage higher than those of similar experience — called a wage premium — back in the 1960s and 1970s, when women teachers received pay that was 14.7% more than comparable female professionals., according to the EPI study.

“In 2019, women teachers were earning 13.2% less in weekly wages than their nonteaching counterparts were — a 27.9% percentage-point swing over the last six decades,” the study concluded.

The wage penalty for men was found to be larger than women, and getting worse, according to the policy institute.

With less funding from their school districts, teachers are still sacrificing their lesser pay for supplies for their classrooms and students.

Mandy Wagner had to get a second job for her first 10 years of teaching just to pay rent and make student loan payments. She also wanted to pursue her Master’s degree in English literature so she could teach higher level classes to her students, but that meant spending more money.

Those sacrifices are being asked of them in collective bargaining negotiations as well, as Tamar Gray, of the Cleveland Heights-University Heights School District, saw first-hand. The teachers and the district just finished contract negotiations in which the district entertained the idea of raising health care costs 250%, with only a total of 8% in raises over the last ten years.

The district and the teachers were able to come to an agreement, but Gray came out with a bad taste in her mouth, especially after teachers were called “heroes” at the beginning of the pandemic.

“The fact that teachers are being asked to settle, to make less, to fix budget problems on one of the most important things that can happen in the state…there’s something wrong with that,” Gray said.

Two education bills were in the General Assembly, and after years of work, House Bill 305 made it through the House. But the end of the lame duck session has run out the clock on the legislation, and the bill floundered in a Senate committee.

The capital budget passed last week included only a small part of the school funding overhaul. Legislators have said they want to make education a priority, but need to see more studies on the cost of the funding formula before they sign on.

House Bill 305’s funding framework would have taken some of the pressure off of property taxes as the main informer of funding levels for local school districts, and put more of the onus on direct state funding.

“We’re running education on a budget,” Wagner said. “And what are we doing having budget teachers and budget education? This is something that we should absolutely be investing in and prioritizing.”

The teachers present during the Policy Matters event say the fate of education affects the poor, affects people of color, and affects the disenfranchised. Therefore, it shouldn’t be hard for their representatives in the Statehouse to do something.

“We’re supposed to have people that want to do well by the public, so to sit up here and say we can’t find the solution…it’s inexcusable,” Gray said.