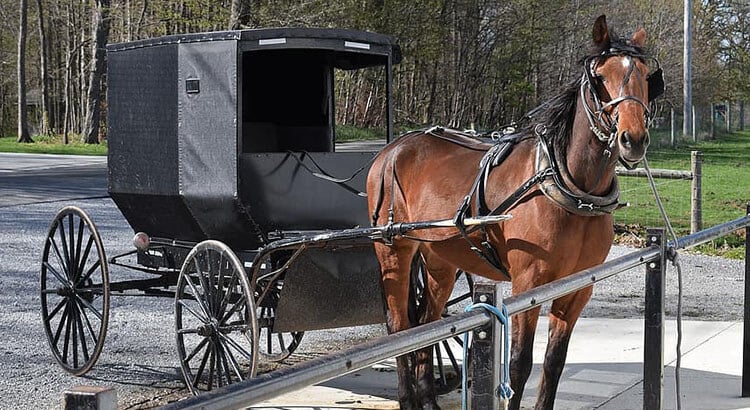 The Ohio House of Representatives voted for the third time against mandating that face masks be worn at the Statehouse. Also on Tuesday afternoon, the state health department reported another one-day record for new cases of a virus that has now killed over 7,000 Ohioans in 2020. Research shows buggy-involved crashes kill between two and three people per year in Ohio on average.

Under current law, animal-drawn vehicles such as Amish buggies must display one of two things when traveling during the daylight hours: reflective tape or a “slow-moving vehicle” emblem.

When traveling at night, they must also have two red lights on the back and a white light on the front.

Two Republican lawmakers representing Ohio’s Amish Country believe that is not enough, and have sought to improve safety standards for these buggies.

Rep. Scott Wiggam, R-Wooster, said he was not at first interested in taking up this effort, fearing it would infringe on Amish residents’ rights. But he was convinced over time that the current laws are not enough to protect Ohioans.

“What is happening is buggies are still not able to be seen,” a maskless Wiggam told colleagues about the existing safety standards.

House Bill 501 would require these vehicles to display a flashing yellow light mounted on the top that is able to be seen from all sides. The vehicles would be required to also display a “slow-moving vehicle” emblem as well as new micro-prism reflective tape.

Micro-prism tape is not perfect, Wiggam conceded, as it only reflects about 80% of light. But it would stand as a worthy upgrade over existing reflective tape that reflects minimal amounts of light.

Rep. Darrell Kick, R-Loudonville, joining Wiggam as a cosponsor, said these improvements would not be an undue burden on the Amish community. In fact, a maskless Kick noted: “It’s a quick, inexpensive and easy fix to a big problem.”

Kick said these “simple measures” resulted from “careful discussions” with an array of sources: Amish residents, law enforcement, the Ohio State Highway Patrol and buggy manufacturers. Indeed, Wiggam noted the bill sponsors factored in studies from experts with the state patrol and at Ohio State University.

There were 120 crashes involving these vehicles last year, Wiggam noted. An earlier analysis of crash data by the Ohio Department of Transportation found there were over 1,400 crashes between 2007 and 2016 resulting in a total of 25 deaths and 208 serious injuries.

This shows the need for better lighting, Wiggam said.

But it is not just the Amish who would benefit from such a bill, lawmakers said Tuesday. All drivers would stand to benefit by avoiding these crashes, even if it is those inside buggies who are most vulnerable to injury and death.

Rep. Bill Roemer, R-Richfield, told a personal story about driving in his Northeast Ohio district at dusk and nearly crashing into a buggy as he traveled over a hill. The maskless Roemer said the buggy was “almost invisible to me” and that he narrowly avoided a devastating crash.

Rep. Michael Sheehy, D-Toledo, pulled down his mask to share his agreement with Roemer and others that the bill would make Ohio roads safer.

The House voted in favor of HB 501 with overwhelming bipartisan support, with a final vote of 74-10. It now heads to the Ohio Senate, which must also approve the bill before it can reach Gov. Mike DeWine’s desk for a signature.

This vote came shortly after Democrats proposed once more that face masks be required for those attending legislative committee hearings and floor sessions.

When a Democratic lawmaker introduced that proposed mandate as an amendment to a bill being heard, Speaker Bob Cupp, R-Lima, rejected it for being irrelevant to the bill at hand. Democrats forced a chamber-wide vote on Cupp’s decision — all Republicans present voted to uphold it, meaning that masks would continue being optional inside the Ohio Statehouse.

Tuesday’s vote came as three lawmakers, including two House Republicans, were absent due to having tested positive for the virus. It also came as the Ohio Department of Health reported a record number of new cases from the previous 24 hours. ODH also recorded that 81 deaths were reported in the past 24 hours, bringing the Ohio total to 7,103 deaths due to COVID-19.

One other Republican lawmaker who voted for House Bill 501 spoke on Tuesday about his support for the bill. Rep. Doug Green of Mt. Orab recalled a person who testified in support of the bill by pointing to the need for prioritizing safety on the roadway.

A maskless Green quoted that supporter: “It is only an accident if both parties are doing everything they can to make their travel safe.”