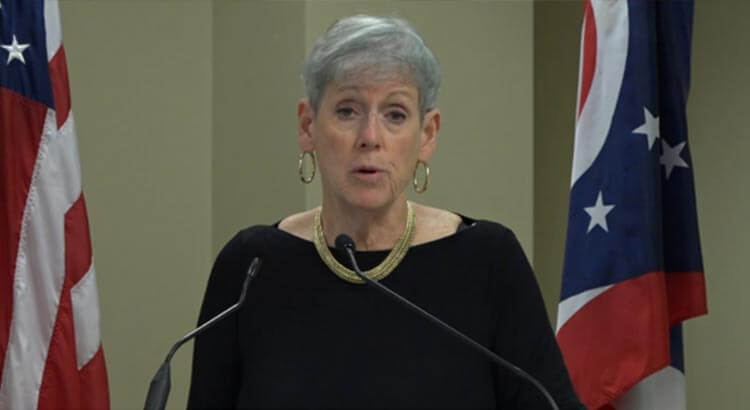 The chief justice of the Ohio Supreme Court has asked the governor to include court staff in the first phase of COVID-19 vaccinations, and chastised some court officials for not following safety protocols.

Currently, the state vaccination program, as announced by DeWine in early December, starts with health care workers, staff and residents of nursing homes and assisted living facilities, patients and staff at state psychiatric hospitals, those with intellectual disabilities or mental illness living in group homes, occupants of Ohio veterans home and EMS responders.

In a letter to the court staff statewide telling them of the request of the governor, O’Connor also said while many judges are taking steps to prevent spread of the virus, reports of “cattle-call” proceedings, unnecessary in-person appearances and lax adherence to Ohio Department of Health safety measures.

“It is no surprise then, that we are also seeing a rise in infections among judicial staff as well as in the offices of public defenders, prosecutors, clerks of court and law enforcement,” O’Connor wrote.

The state supreme court took up one such case of a judge not taking COVID-19 precautions, and ruled that he could be disqualified from two cases as a result.

Judge Mark Fleegle, a judge in the Muskingum County Court of Common Pleas, was accused of failing to “implement precautions to protect against the spread of coronavirus in his courtroom,” according to the court decision, filed Thursday and written by Chief Justice O’Connor.

Fleegle reportedly dismissed objections to a lack of social distancing and face covering requirements in his courtroom saying the “recommendations were not mandatory and that his large courtroom allowed for social distancing,” court documents stated.

In response to the allegations, Fleegle maintained the argument that the safety measures are “recommendations, not rules or orders.”

“The judge believes that he and the jurors are essential employees and that trials and hearings ‘must continue to proceed in order to keep our system of government intact,’” the ruling stated.

Another judge was brought before the supreme court in June after two defense attorneys wanted him disqualified from a capital trial he intended to continue despite court closures due to the pandemic.

That judge had implemented “some precautions recommended by public health officials,” the court found, so he wasn’t disqualified.

Fleegle admitted to the court that he didn’t have a written policy about the safety measure, even though he’d made changes to require masks and social distancing.

“Even if Judge Fleegle is convinced that he can preside over a safe jury trial without any sort of written protocol, he should recognize that other people take public health recommendations very seriously and that the health concerns of attorneys and parties should be an important factor in deciding whether to proceed with jury trials during this phase of the pandemic,” O’Connor wrote.

In her letter to court staff throughout the state, she said weariness of COVID-19 and the potential for a vaccine should not keep personnel from continuing safety measures.

“The vaccine is a long-awaited light at the end of the tunnel, but we cannot allow ourselves to become complacent now,” O’Connor wrote. “Your vigilance continues to protect your employees and the public you serve.”