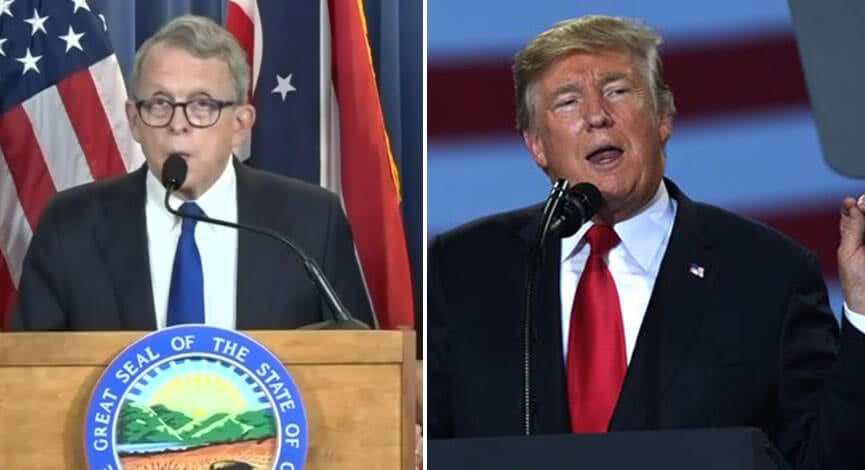 Gov. Mike DeWine called Monday “a great day” in the annals of the Buckeye State as the first doses of coronavirus vaccine were injected into the arms of medical workers deemed to be at high risk.

He and his wife, Fran, were on the Ohio State campus Monday morning as the first staffers at Wexner Medical Center got the first of two shots manufactured by Pfizer that together are expected to confer strong immunity to the disease. At the same time, first doses were being delivered to the University of Cincinnati Medical Center.

Additional doses are expected to be delivered in eight Ohio counties on Tuesday, and pharmacy chains CVS and Walgreens will start inoculating nursing home residents on Friday.

Coming as it did on a day when the United States recorded its 300,000th coronavirus death, it’s undoubtedly good news that Ohioans are starting to be vaccinated.

Adding to the good news it is if, as expected, a vaccine made by Moderna gets regulatory approval in the coming days, Ohio will be on track to deliver enough vaccines in December and January to immunize more than 600,000 people.

But that’s far from enough to achieve herd immunity that would allow Ohioans to go back to their pre-pandemic lives and it’s unclear when enough vaccine will be available to do that.

It didn’t have to be that way.

“We don’t know in the months ahead how fast the vaccine is going to come to Ohio,” DeWine said, later adding, “It’s going to take awhile for us to get even close to the herd immunity people are talking about.”

Making predictions difficult is whether any of the other drug makers who have been working with the federal government will see their vaccines approved, how quickly production can be scaled up, how effectively vaccines can be distributed and how many have been reserved for Americans.

One failure by the Trump administration almost certainly delayed the day when enough Ohioans have been vaccinated that the virus will find it difficult to spread.

The New York Times last week reported that Pfizer, a U.S. company, in the summer offered the federal government the chance to lock in hundreds of millions of doses of its vaccine in addition to the 100 million it had already reserved. Pfizer said the government would only have to pay for the vaccine if it were proven to be effective.

For some reason, the feds declined the deal. The European Union then locked in 200 million doses of the vaccine, which in November was shown to be 95% effective in clinical trials.

The Times reported that Pfizer now can’t guarantee the United States any more than the 100 million doses it initially locked in. Since it takes two doses of the vaccine to get its full effect, that’s enough to inoculate 50 million Americans, or about 15% of the population. Ohio is expecting enough of the Pfizer and Moderna vaccines by the end of January to inoculate about 11% of the state’s population.

There are still questions about how much immunity one gets from catching covid and then recovering. But assuming that it’s durable, scientists estimate that 70% of the population will have to be vaccinated against or have recovered from a coronavirus infection for herd immunity to be achieved.

In his coronavirus press briefings, DeWine has frequently praised Vice President Mike Pence for his openness and willingness to help governors with covid-related issues.

But DeWine on Monday had no memory of Pence discussing why his administration didn’t take Pfizer up on an offer to supply vastly more of its vaccine to the most infected country in the world.

“I don’t recall that,” DeWine said, adding that the governors were going to hold a virtual meeting with Pence later in the afternoon.