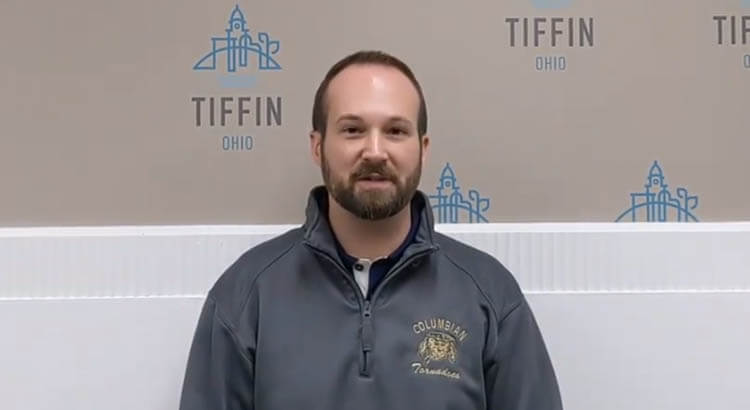 Tiffin Mayor Aaron Montz recently participated in an interview with Tiffin Columbian High School’s student newspaper, The Tiffinian, in which he discussed a wide range of topics including his first (and unsuccessful) run for mayor and his future political plans.

The student newspaper’s staff have recently started interviewing Tiffin City Schools alumni for feature stories over their next several editions.

“I am truly humbled to have been selected as their initial interviewee in the December 18th publication,” Montz said. “A big thank you to Tiffin Columbian senior Jorie Fawcett and the staff of The Tiffinian for their very well written article.”

In the article, Montz described his first run for mayor of Tiffin while still a senior at Columbian High School.

“The extreme support I had from staff and students at the school really was incredible,” Montz told The Tiffinian.

Montz said students and community members supported his bid for mayor at football and basketball games by wearing shirts and chanting “Montz for Mayor!”

“It was just a really neat experience, but overall the education I received at Tiffin Columbian was top-notch and it set me up for success down the road,” the mayor said.

After serving a term on Tiffin City Council, Montz was elected in 2011 as Tiffin’s youngest mayor at age 26.

As for his political future, Montz told The Tiffinian that he has no plans to leave Tiffin anytime soon.

When State Rep. Bill Reineke decided to run for State Senate earlier this year, Montz said people encouraged him to run for the statehouse seat, but he ultimately decided against it.

“My work here is not done, and I still see myself here in 5 years,” Montz told The Tiffinian.

Read the full article from The Tiffinian featuring Mayor Montz below.