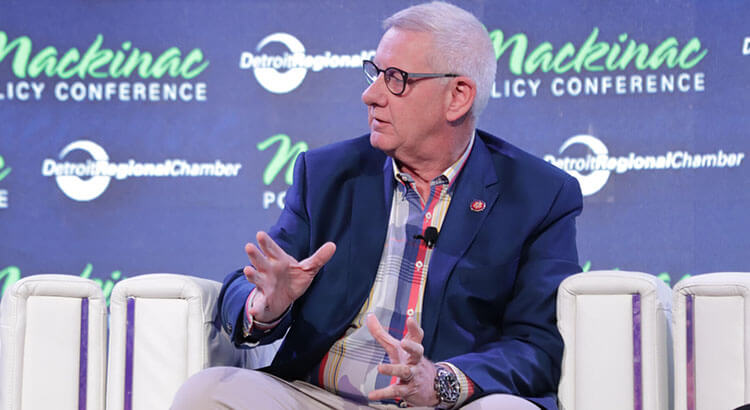 U.S. Rep. Paul Mitchell (I-Dryden Twp.) announced Monday he was leaving the Republican Party, saying that President Donald Trump’s attempts to dismantle the election process was the last straw for him.

“If Republican leaders collectively sit back and tolerate unfounded conspiracy theories and ‘stop the steal’ rallies without speaking out for our electoral process, which the Department of Homeland Security said was ‘the most secure in American history,’ our nation will be damaged,” Mitchell wrote in a letter to Republican National Committee Chair Ronna McDaniel, and U.S. House Minority Leader Rep. Kevin McCarthy (R-Calif.).

Today I am disaffiliating from the Republican Party.

See my letter below: pic.twitter.com/76IxC4FMvJ

“I have spoken out clearly and forcefully in opposition to these messages. However, with the leadership of the Republican Party and our Republican Conference in the House actively participating in at least some of those efforts, I fear long-term harm to our democracy,” Mitchell added.

Mitchell is now serving as an independent lawmaker and is retiring this term. The millionaire businessman notes that this withdrawal is mostly symbolic, but adds “we all know that symbols matter.”

Biden won the popular vote and is expected to win 306 electoral votes to Trump’s 232. Michigan’s 16 electors met on Monday to cast their votes for Biden, who won the state by more than 154,000 votes. Some Republicans moved to submit a slate of fake electors.

“It is unacceptable for political candidates to treat our election system as though we are a third-world nation and incite distrust of something so basic as the sanctity of our vote,” Mitchell wrote.

Mitchell isn’t the first Michigan congressman to leave the Republican party this term. U.S. Rep. Justin Amash (L-Grand Rapids) left the party in July 2019 when he supported Trump’s impeachment. He is now a Libertarian and also is retiring this year.

U.S. Rep. Fred Upton (R-St. Joseph) is the only other Republican in Michigan’s congressional delegation who has stated that Biden is the winner of the 2020 presidential election. Both did on Nov. 7, the day the Associated Press and other media outlets called the election for the Democrat.

Mitchell said he cast his vote for Trump in the Nov. 3 election, “despite some reservations about four more years under his leadership” and agreed that there are some “disconcerting aspects” of the election that should be investigated.

However, he shifts the letter to McDaniel, who is a Michigan native, stating that she should know better.

“Ronna, you know Michigan politics well. President Trump did not lose Michigan because of Wayne County, but rather he lost because of dwindling support in areas including Kent and Oakland County, both previous Republican strongholds,” Mitchell wrote.

This hasn’t been the first time that Mitchell bucked his party. The second-term congressman criticized Trump last year over his racist comments about U.S. Rep. Ilhan Omar (D-Minn.).

Mitchell was in step with his former party about Gov. Gretchen Whitmer’s COVID-19 restrictions, however, and expressed interest in leading a ballot measure this year against them.

This story was republished from the Michigan Advance under a Creative Commons license.