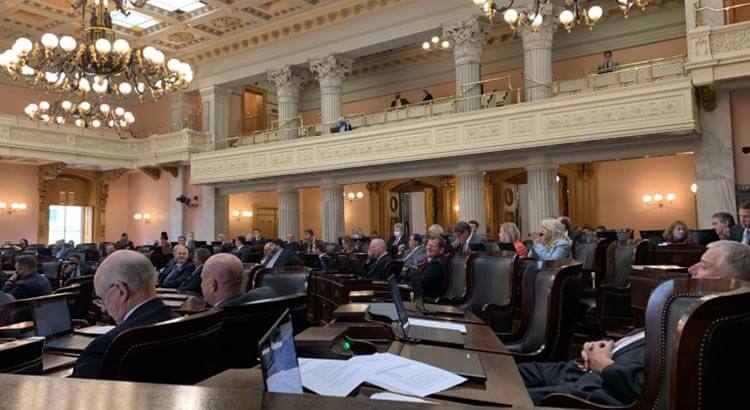 Update: At 10:45 a.m. Thursday, the Senate President announced the body could convene as needed, meaning Thursday might not be the last day of the legislative session.

With one official legislative day remaining in Ohio’s 133rd General Assembly, Ohio lawmakers have by and large narrowed their focus to these policy objectives.

Ohio Capital Journal staff broke down some of the most significant pieces of legislation in play in the last breath of the legislative session.

Repeal effort of nuclear bailout comes down to final day

In the aftermath of Speaker Larry Householder’s arrest, many wondered: Would the law at the center of the FirstEnergy scandal be repealed?

Most lawmakers have agreed some action on House Bill 6 is necessary, but there has been disagreement about how to approach a repeal effort.

As OCJ reported today, there have been five separate repeal bills introduced since July. Only one has a shot at passing the two chambers today: House Bill 798, which repeals only part of the tainted nuclear bailout bill passed in 2019.

Gov. Mike DeWine has endorsed a repeal of HB 6. Should lawmakers not pass a repeal bill today, they will have to start discussions all over again in 2021.

A Senate committee combined two bills broadening gun rights Wednesday into one cohesive package and sent it to the floor for a possible vote Thursday.

If passed, the bills would roll back gun owners’ requirements to notify police that they’re carrying a concealed weapon after they’ve been stopped, and open the door for local school districts to allow their teachers to carry firearms.

The first chunk of the package would remove an existing requirement that a person who’s lawfully carrying a concealed weapon promptly notify a police officer during an encounter.

The proposal is supported by firearms lobbyists and gunowners’ associations and opposed by groups representing law enforcement.

Secondly, the bill would authorize local school districts to create firearms policies for their teachers and other employees. It would also allow them to set training requirements to do so.

Last week, another bill was sent to the floor to expand the right to shoot to kill in perceived self-defense in Ohio.

By current law, Ohioans have no duty to retreat to perceived threats in their home or vehicle. SB 383 expands this to any place a person is lawfully present.

Under the bill, often referred to as “stand your ground,” Ohioans who can evade a threatening situation no longer need to do so before choosing to shoot in self-defense.

If a person shoots someone and claims self-defense, SB 383 says a court cannot consider the possibility of retreat in determining whether that person used force in self-defense.

Abortion bill up for consideration

House lawmakers are likely to push one more abortion bill through the session, with Senate Bill 260 already passed through the House Health Committee.

The bill bans medication abortions where appointments are conducted through telemedicine. Abortion advocates have said the bill is just another way to reduce access to women’s health clinics that offer abortion services.

The bill passed the House Health committee on Tuesday with no discussion and only written testimony. It moved easily through the Ohio Senate in March on a mostly party line 20 to nine vote. Two Republican senators, Sens. Stephanie Kunze and Nathan Manning, voted against the bill.

To override or not to override DeWine’s COVID-19 veto?

Republican lawmakers have spent much of 2020 calling for legislative oversight of the state’s pandemic response. On Thursday, the party will get an opportunity to override a veto of Senate Bill 311.

Whether the override votes will be taken is not yet clear.

SB 311 does two main things: It gives state lawmakers the ability to vote down any health orders issued by the Ohio Department of Health, and it prohibits the state from issuing widespread quarantine orders.

Gov. Mike DeWine vetoed the bill earlier this month and has threatened similar vetoes to any laws targeting the state’s pandemic authority.

To override a veto, the Ohio General Assembly must have three-fifths approval from both chambers, with the Ohio Senate going first. The Republicans have three-fifths supermajorities in both, but have little wiggle room to work with in this instance.

SB 311 passed the Ohio Senate in September with a vote of 20-13; all 20 Republicans who voted yes would have to agree to the override.

It passed the Ohio House of Representatives in November by a party-line vote of 58-32. There are 61 Republican members in the House and 60 votes are necessary to override the veto.

Getting 60 Republicans in the chamber at all may be a challenge, given that several recently tested positive for COVID-19.

Asked about SB 311 at his COVID-19 press conference Tuesday, DeWine told reporters that he has been “in discussions” with legislative leaders ahead of today’s session.

“We want to come out of this with a health department that is not crippled, not hurt,” he said. “I’ve made my position very clear and my position has not changed.”

There is one other bill targeting ODH authority that may also head to the governor’s desk: House Bill 621, also known as the Business Fairness Act. It would prevent ODH from closing any business (like happened during the spring) provided the business can otherwise adhere to state health guidelines such as keeping customers apart.

House Bill 621 passed the House by a vote of 77-10; it is among the only coronavirus-related bills to receive some Democratic support this year.

It would need to be approved by a Senate committee early Thursday and then be approved in a chamber-wide vote in order to reach DeWine’s desk.