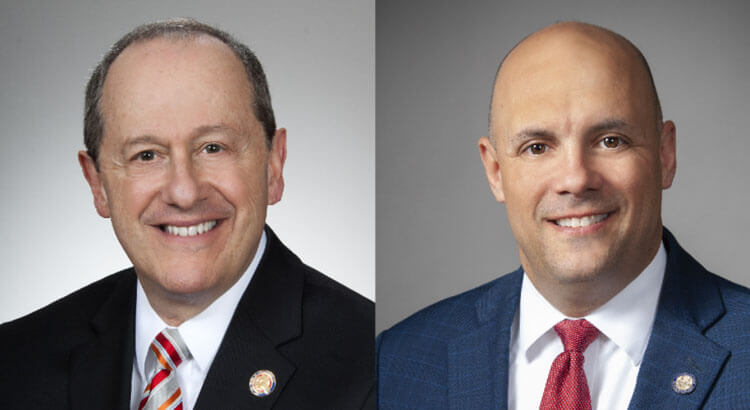 Ohioans struggling to pay their rents or mortgages may head into 2021 without the housing protections and public assistance that have carried them through much of the pandemic this year.

A federal moratorium on evictions is about to expire. Two other relief programs helping unemployed Americans are set to run out. There are believed to be thousands of Ohioans who are in immediate risk of eviction due to unpaid rent, with many low-income earners still working reduced hours or remaining out of work entirely.

Back in March, two Democratic lawmakers proposed a statewide moratorium on eviction and foreclosure actions so long as Ohio stayed under a state of emergency amid the COVID-19 pandemic. The economy has rebounded somewhat from historic unemployment in the spring, but the virus outlook looks grim as the state heads into the cold winter months.

State Reps. David Leland of Columbus and Jeffrey Crossman of Parma believe the moratorium is needed now more than ever.

“This is not just a humane thing to do,” Leland said in a committee hearing on the bill Thursday morning, “it’s not just asking you to embrace the holiday spirit. Instead, as we survey the landscape after these tumultuous nine months and ahead of next year’s budget negotiations, this is a way to save numerous low-income Ohioans’ from unimaginable hardship.”

“The urgency of this legislation is really right now,” Leland continued.

Under House Bill 562, landlords could still file eviction actions, but courts would be prevented from acting on them while the state of emergency is in place. Law enforcement officers could not carry out eviction orders either. Courts would not be able to conduct any business pertaining to foreclosures and must halt all pending foreclosure actions.

This moratorium would apply to residential and commercial properties.

Nearly two-dozen Democrats and one Republican have supported the bill as cosponsors.

‘Last remnants of the safety net’

The large-scale CARES Act signed into law in March has provided trillions of dollars of relief, but many of its programs benefiting Ohio tenants have already run out or are about to.

This includes the Pandemic Emergency Unemployment Compensation and the Pandemic Unemployment Assistance programs, which have helped those who have lost work during the crisis. Both programs end the day after Christmas.

In September, the Centers for Disease Control and Prevention (CDC) issued a nationwide moratorium on evictions for residential properties. It prohibits U.S. landlords and property owners from evicting a tenant for unpaid rent.

That moratorium is set to expire on New Year’s Eve.

“Just as covid cases are exploding and our hospitals are filling, and just as the coldest parts of winter are setting in, hundreds of thousands of Ohioans are set to be stripped of the last remnants of the safety net Congress put in place back in March,” Leland said.

Ohioans struggled to pay their housing costs even with that safety net in place. A survey from this past summer found more than a half-million residents could not pay rent in June 2020.

Now these same residents potentially face 2021 without the CDC moratorium and without relief assistance — unless Congress acts again to pass a relief bill to close the gaps left by the still struggling economy.

A total of $50 million from the CARES Act was allocated for emergency rental assistance in October. But advocates say more is needed.

“Unless the Senate stops blocking any meaningful relief, we’re really worried about what’s going to happen in 2021,” said Marcus Roth, a spokesman for the Coalition on Housing and Homelessness in Ohio, last month.

That’s also the hope of Gov. Mike DeWine, who again called on Congress to pass a relief bill during his COVID-19 press conference on Thursday.

DeWine was asked if he supported the CDC extending its eviction moratorium into 2021.

“I’d have to take a look at that. I don’t know,” DeWine answered. “But look, this is a problem. This is a problem and is something that we are in fact focused on.”

Lt. Gov. Jon Husted argued that a moratorium alone does not address the costs faced by property owners and suggested such action should be paired with further government relief.

“There’s still somebody that has a mortgage to pay on that facility, who has a default that could potentially happen with their lender, which creates a whole chain of events and series of events,” Husted said. “So there has to be a financial solution to go along with any moratorium so that we don’t create a chain reaction in the system that causes additional problems.”

Unintended consequences to a moratorium?

In committee, state Rep. D.J. Swearingen, R-Huron asked the HB 562 sponsors about the “unintended consequences” of continuing a moratorium in Ohio. Swearingen noted that property owners still have costs such as repairs and that smaller banks may not be able to carry so many unpaid loans.

Crossman acknowledged those concerns but said the ramifications of doing nothing would have a greater impact on individuals.

“I think we just have to ask ourselves, who’s in a better position to bear the burden here? The individual who is not making any income trying to keep their family fed and clothed and in a housing situation during the middle of a pandemic, particularly if they don’t have a job, or a lender who can maybe take a two- or three-month pause from getting their mortgage payments?”

Crossman said the latter is in “a far better position financially” to handle the issue.

Lawmakers also heard testimony from Dan Acton, a lobbyist for the Ohio Real Estate Investors Association who spoke in opposition to passing an Ohio moratorium. He said his organization consists of a few thousand “smaller” real estate investors who typically own single-family housing units.

He claimed these property investors operate on “razor-thin profit margins.” When tenants do not pay their rent bills, Acton said, this reduces the “profits for a property owner that could otherwise be used to reduce the overall debt on a property or make improvements.”

“The pandemic and the resulting eviction moratoria and payment delays are leaving our members on the brink of failure,” Acton said, arguing it would be “dangerous” for the government to “interfere” with a private leasing contract.

Leland said a moratorium is not meant to be a “long term-solution,” but would allow Ohioans to stay in their home until winter passes, the economy rebounds and a vaccine is made available.

Separately, Leland and fellow Democratic Rep. Juanita Brent of Cleveland also sponsored House Bill 744 that would allocate around $270 million from the state’s “rainy day fund” to pay for a new COVID-19 Emergency Rental Assistance Program. No action has been taken on this bill.