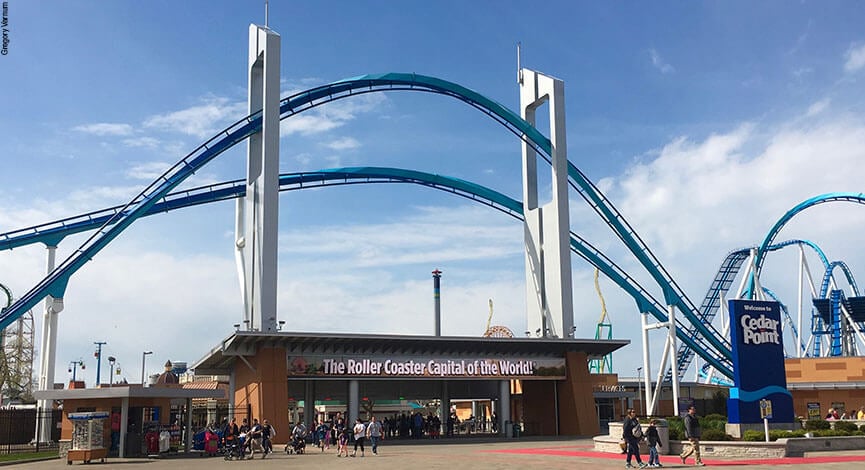 In the 1950s, Gov. Frank Lausche pushed for Ohio to purchase Cedar Point and turn the area into a state park. Lausche even had the support of legislative leaders and other state officials. But the state never followed through.

Frank Lausche knew an opportunity when he saw one.

The year was 1956, and the Democratic governor had already spent years advocating for Ohio to invest more resources into public beaches along Lake Erie.

The majority ownership of Cedar Point, the famed amusement park and beach resort, wanted to sell its shares. A group of investors sought to buy Cedar Point, close the resort and turn the entire site into a housing development.

Local residents were dismayed. Lausche saw opportunity. He proposed the state buy the 400-acre site and turn it into a public state park. The state already owned several beach properties along Lake Erie and the Ohio Department of Natural Resources viewed Cedar Point as a desirable addition.

Despite initial momentum in favor of the plan, the deal never went through. What followed was a sequence of delayed decision-making, political flip flops and finger-pointing between the two branches of government.

It remains one of the great “what ifs” in Ohio political history.

First and foremost, Lausche needed the support of the Ohio General Assembly, whose members control the power of the purse.

Lausche had already scheduled a special session at the Ohio Statehouse for June 28, 1956. In the weeks leading up to it, he told reporters of his plans to pose the Cedar Point purchase question during the session.

Most newspapers were supportive, though a few poured cold water on the plan. An editorial from the East Liverpool Evening Review laid out several concerns about the “monetary wrinkles” still to be ironed out.

“(T)he state would have to pour a large sum of money into new capital investment and additional large amounts into operating expense,” the paper wrote. “If the present owners cannot keep Cedar Point going for pay, what reason is there to believe the state of Ohio could keep it going for free without covering large deficits?”

The Evening Review acknowledged the project would be good for Ohioans — “their bodies, their souls, their morale” — but expressed concern their nostalgia toward the “once-booming resort area” could lead to a bad financial decision of public funds.

Speaking of funding, no one seemed to have any clue what the purchase price or ongoing expenses would be. The purchase alone was estimated to be between $900,000 and $6 million.

From there, proposals differed in that some called for Ohio to only operate a public beach, while others wanted Ohio to continue operating the entire amusement park as well as the beach. Would the state commit to renovating the famed Breakers Hotel? The existing park attractions? Building new ones? Few actual specifics were ever offered.

There was also the matter of transportation to and from the proposed state park. The “Causeway” bridge now serving as the main entry point for Cedar Point did not exist in 1956. The narrow “Chaussee” entrance was seen as unsuitable for handling an influx of tourists. Officials fretted over the potential cost of renovating that road or having to operate a ferry boat service.

Nevertheless, momentum grew in favor of the state agreeing to buy the park. Lt. Gov. John Brown was so enthusiastic that he urged Lausche to throw in a purchase of Chippewa Lake Park in Medina as well. (Brown was previously the mayor of Medina.) It seems Lausche did not try to press his luck.

Lausche had to contend with two legislative leaders from the opposing political party, neither of which were from northern Ohio. But he was heartened to learn a week before the special legislative session that he had the support of House Speaker Roger Cloud of Logan County and Senate President Pro-Tem C. Stanley Mechem of Athens County.

Many other lawmakers joined them in quick succession, offering quotes of support to their local publications.

Then business interests and a little bit of incompetence got in the way.

Cloud announced a group of lawmakers would tour the Cedar Point site. There was just one problem: he could not locate enough legislators who were available to make the trip. Most of those representing northern Ohio were aboard a “Great Lakes Cruise” organized by the Cleveland Chamber of Commerce.

Cloud had to wait for them to return, eventually making plans for a June 27 trip to the park — just one day before the special session. After that date was announced in the press, the lawmakers decided to go on June 26 instead, but apparently neglected to tell park officials of the change in plans. The park president was out of town that day, and lawmakers headed back to Columbus still without a concrete idea of what Ohio could buy or how much it would cost.

Cincinnati-area lawmakers were not too keen on the idea of investing more money into Lake Erie tourism, and vowed to reject the project.

What seemed like a sure deal just days before suddenly had fallen apart.

On the morning of June 28, Lausche decided against officially asking the legislature to buy Cedar Point. The local Sandusky Register newspaper reported that Lausche “apparently bowed to obviously prevailing sentiment in the GOP-controlled legislature that the purchase could await more complete consideration by the regular session which will meet in January (of 1957).”

Lawmakers did, however, decide to review the matter further. The two chambers voted almost unanimously to ask the Legislative Service Commission to prepare a study on the subject.

Two months later, LSC held a meeting at Cedar Point to hear testimony from local officials. Opponents dominated this discussion. Sandusky’s mayor complained of potential traffic problems and about losing more land to tax-free government ownership. The Sandusky Chamber of Commerce expressed fears the state would go with a “beach only” plan and cut the jobs of amusement park workers.

Lawmakers distanced themselves from the project, even those that had once supported it. State Rep. Ethyl Swanbeck, whose district included Cedar Point, had been an early advocate of the plan but later thought it wise to hold off.

Joseph Bartunek, a Cleveland Democrat serving as the Senate Minority Leader, had once trumpeted the public response to the plan as “tremendous” and told reporters, “I think it is something that should be saved for future generations of Ohio.”

After the LSC meeting, however, Bartunek agreed that Ohio should instead renovate the state parks it already owned.

“The (Cedar Point) idea was dropped like a hot rivet,” The Salem News would later write.

Becoming the ‘Disneyland of the Midwest’

In September 1956, a judge gave the go-ahead. A group of investors led by entrepreneur George Roose was ready to move in to take control.

Roose, native of Perrysburg, had lived an interesting life to that point. He served in World War I before returning to Ohio and graduating from Oberlin College. After studying law at Harvard University, he ran a successful investment bank before losing everything when the stock market crashed in 1929.

“There was a point in time when all I could lay my hands on was $50,” he told a reporter many decades later.

Roose had grand ideas about what to do with Cedar Point — none of which involved beaches or roller coasters. Roose wanted to raze the entire park in order to build an upscale housing development. The location right on Lake Erie couldn’t be more perfect.

At some point in the early weeks of 1957, Roose and the investors changed their minds. The new management confirmed in February it would continue operating the amusement park, bathing beach and Breakers Hotel after all. Roose also announced the highly-anticipated Causeway bridge would be open in time for Memorial Day.

This pretty much spelled the end for Ohio’s hopes of buying the property. With the crisis of losing the resort to private real estate averted, lawmakers lost interest in pursuing ownership of the park.

Other state officials, however, lamented the missed opportunity over the coming years.

In 1958, the 62-year-old Roose became president of Cedar Point amusement park. The man who had once wanted to demolish the site now saw potential as it becoming the “Disneyland of the Midwest.” He oversaw the construction of many classic Cedar Point attractions, from the Blue Streak roller coaster to the steam locomotive.

When the Corkscrew coaster was built in 1976, Roose — now in his eighties — was a devoted rider. In fact, he rode every ride in the park, figuring that paying customers wouldn’t enjoy riding them if the park’s president didn’t enjoy them too.

Roose finally retired in 1977 at the age of 81. The park is now the flagship of Cedar Fair, a multi-billion dollar company headquartered in Sandusky with a dozen amusement parks from coast to coast.

One wonders what would have happened had Frank Lausche got his way.