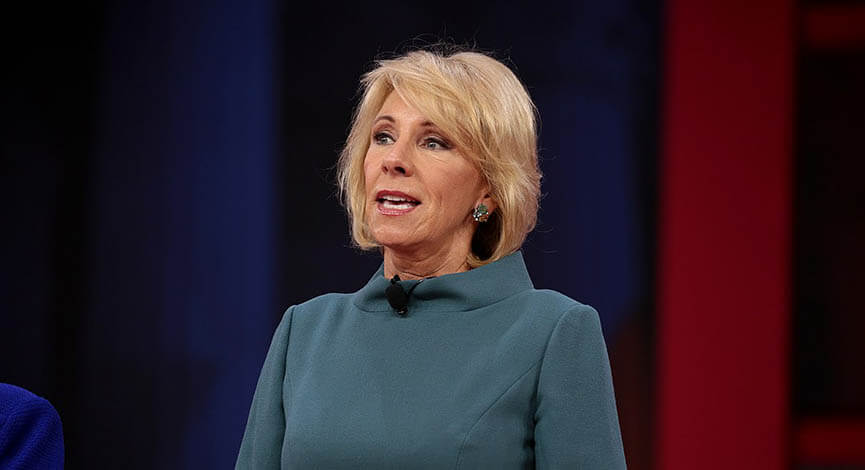 In four years in office, U.S. Education Secretary Betsy DeVos failed to broaden her appeal beyond the moment she won a wild Senate confirmation fight by the closest of margins. She didn’t even try.

Instead, the billionaire Michigan native and Republican megadonor championed private and charter schools, often trying to funnel federal funding toward them. Her full-throated support outraged Democrats in Congress, riled the nation’s powerful teachers unions and never registered as a major priority for the Trump administration.

In higher education, she resuscitated for-profit colleges and wrote sweeping regulations on campus sexual assault to give more weight to the accused, generating an onslaught of criticism.

When COVID-19 upended education as never before, DeVos pushed overwhelmed local leaders to physically reopen their schools and attempted to use emergency funds to aid private education.

Now DeVos will leave office next month facing the prospect that many of her principles will be spurned and rules overturned by her Democratic successor. Perhaps it’s not surprising, then, that even her ideological allies are divided about her legacy.

“She certainly made her mistakes, and she was certainly different than anybody ever anticipated an education secretary to be. But I don’t think it’s as negative as people think,” said Jeanne Allen, the founder and CEO of the Center for Education Reform, and a DeVos supporter.

“You’re going to see in the years ahead that she had an impact on how people think about how kids are learning,” Allen said. “She says constantly that there should be no one-size-fits-all school for kids. Now a lot of people are saying that. I don’t think it’s a coincidence.”

But Mike Petrilli, the president of the Thomas B. Fordham Institute, a conservative education think tank, views DeVos’ four years as a missed opportunity.

“Her tenure was a gift to the teachers unions, even though that’s not what she intended,” he said. “Her signature issue was school choice. The only fair way to assess the impact she had on that was that she hurt the cause. She made it harder for people on the center and the left to support school choice and charter schools.”

Petrilli acknowledged that any Trump nominee would have likely met intense resistance from teachers unions and liberal groups. But DeVos’ background reinforced caricatures that school choice supporters are wealthy and out-of-touch, Petrilli said, even though he said those stereotypes are false.

“She was just not the right messenger,” he said. “I wish she had stepped down earlier, because she hurt her own cause.”

DeVos’ office declined to comment for this article, beyond sharing a list of the secretary’s accomplishments in office.

As for President-elect Joe Biden, he has not yet announced his nominee for the job but has made it clear what he doesn’t want.

“First thing, as president of the United States — not a joke — first thing I will do is make sure that the secretary of education is not Betsy DeVos. It is a teacher. A teacher. Promise,” Biden said on the campaign trail in 2019.

What’s an education secretary supposed to do?

Americans have vastly different expectations from the U.S. Department of Education.

The agency plays a limited role in everyday schooling, since most decisions are made by states, school boards and school districts, and funding is mostly collected from state and local taxes.

Congress handed even more power to states when it passed the Every Student Succeeds Act five years ago. The new law relaxed many of the federal accountability measures that Congress put into place during the administration of George W. Bush.

“One of the most misunderstood aspects about the role of an education secretary, is that [people expect that the education secretary is] supposed to be engaged in every single policy effort going on around the country,” said Allen.

That hands-off approach explains why DeVos instituted a hiring freeze and oversaw a 10 percent decrease in the number of departmental employees, in tandem with a Trump administration initiative to trim the size of government.

DeVos also rescinded many Obama-era policies, ranging from accommodation of transgender students to racial disparities in student discipline. Her office counted 29 major “deregulatory actions” that the agency took under her leadership.

Liberals, on the other hand, view the agency as a critical player in enforcing civil rights and delivering more resources for disadvantaged students.

“If you’re someone who prioritizes equity as the goal, if you believe that there is a really important federal role play in ensuring education and civil rights, if you are really concerned about inadequate resources going to kids who have been through for generations have been beat down by racism, and fundamentally, if you support public schools, you have been waiting for January 20th for a long time,” said Phillip Lovell, the vice president of policy development and government relations at the Alliance for Excellent Education, a group that focuses on improving high school education for historically underserved students.

During the DeVos stint in office, Lovell said, the Department of Education gave too much deference to states when it came to crafting strategies to deal with inequities in the classroom. Under ESSA, states have to submit their plans to the federal agency. DeVos’ team did require some states to revise their plans, but Lovell said her agency didn’t scrutinize state plans enough.

In states like Michigan and Connecticut, he said, many of the schools that needed the most help did not qualify for additional federal aid. Because students of color are concentrated in lower-performing schools, they were disproportionately affected by those state formulas.

But Lovell and many other experts expect the department to dramatically shift under Biden’s presidency.

John Schilling, the president of the American Federation for Children, an organization that DeVos chaired before she was tapped as secretary, said DeVos made significant strides in advancing school choice.

Her office distributed more than $130 million for the federal Charter Schools Program, which it directed primarily toward schools in “opportunity zones.”

The opportunity zones are areas designated by governors as economically distressed, in order to attract investors seeking federal tax breaks. DeVos also tried, unsuccessfully, to use money from a March coronavirus relief package to support a broader swath of private schools.

Schilling said it takes time to get Congress on board for broader changes.

“When she was talking about elevating the issue of school choice, and rethinking and reimagining K-12 education, that’s where it’s all going,” he said.

But Nina Rees, the president and CEO of the National Alliance for Public Charter Schools, said in a statement that, even though DeVos supported charter school expansion, “her attention was mostly on efforts to expand access to private school choice.” By contrast, she said, the Obama administration left a “lasting legacy” in support for charter schools.

Charter school enrollment grew by 11 percent since the end of the Obama administration, according to the Center for Education Reform. There are now more than 7,300 charter schools teaching 3.3 million students.

Randi Weingarten, the president of the American Federation of Teachers union, said the Obama administration supported public schools. “The Trump administration does not, and has done nothing to help or support it. It essentially undermined [public education] for four years through budget cuts and destabilization,” she said.

Weingarten, who is rumored to be a candidate to succeed DeVos, faulted the Education secretary for budget proposals that would have cut funding to programs such as free student lunches, the Special Olympics and need-based federal aid.

Lovell, from the Alliance for Excellent Education, agreed.

“It’s really unfortunate to have someone as the head of the U.S. Department of Education who fundamentally doesn’t seem to support public schools,” he said.

What’s next for the most well-known Education secretary in decades is unclear, though her home is in Michigan.

Advocates for school choice who know DeVos predict she will continue to be a force.

“As an education reformer and as her friend, I’m just deeply appreciative that she was willing to do this public service for the last four years. It takes a lot of courage,” Schilling said. “I think having been in the arena for the last four years in the way that she has, I have a feeling that she will come out of this even more determined to fight for the things that she believes.”