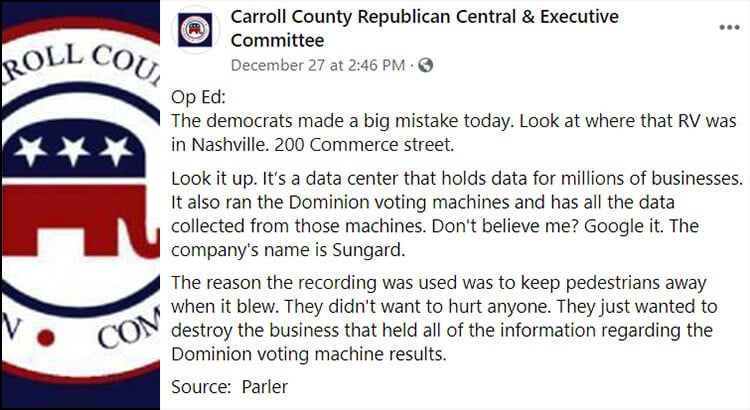 A rural Ohio county’s Republican Party is blaming the recent Nashville bombing on its political opponents, falsely alleging on Facebook that the Democratic Party orchestrated the bombing as a means of carrying out a voter fraud plot.

Facing comment section scrutiny for its baseless claims, the Carroll County Republican Central & Executive Committee page answered that a lack of “traceable evidence” is further proof of the scheme.

Jeff Mangun, the chairman of the Carroll County Republican Party, said he did not publish the controversial Dec. 27 post and that another member of the county party’s leadership did.

Mangun declined to comment further to the Ohio Capital Journal, saying he did not want to “undermine” a fellow member of the party. He said he did not know enough about the Nashville incident to either support or refute the claims made.

Authorities are still investigating why a 63-year-old man detonated a bomb on Christmas morning which injured three people and damaged numerous buildings in downtown Nashville. The man died in the blast, officials have said. The bombing took place at the location of an AT&T central office, which the local Tennessean newspaper described as being “a facility that includes connection points for regional internet and wireless communications.”

Two days after the bombing, The Carroll County Republican Central & Executive Committee page asserted without evidence the blast was part of a voter fraud conspiracy.

“The democrats made a big mistake today,” the post begins. 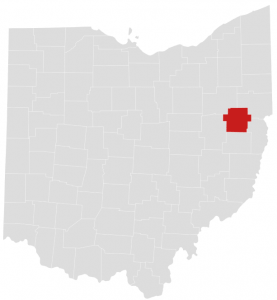 Dominion is a company that supplies voting machines in more than two-dozen states, including Ohio. On Monday, The Associated Press debunked claims that Dominion has any connection with AT&T and the building damaged in the bombing. There were no voting machines inside the building, nor did AT&T have any contract to audit Dominion voting data as has been claimed in other conspiracy theory posts.

After someone posted a fact check in the comment section, the Carroll County page responded, “There will be no traceable evidence…ever. ‘It didn’t happen’. This goes deeper that (sic) anyone can perceive.”

A review of the Carroll County Republican Central & Executive Committee Facebook page shows it often shares controversial and conspiratorial content. A day before the Nashville claims, the page shared a photo of Barack and Michelle Obama kayaking with a caption that referred to the former First Lady as “Mike.”