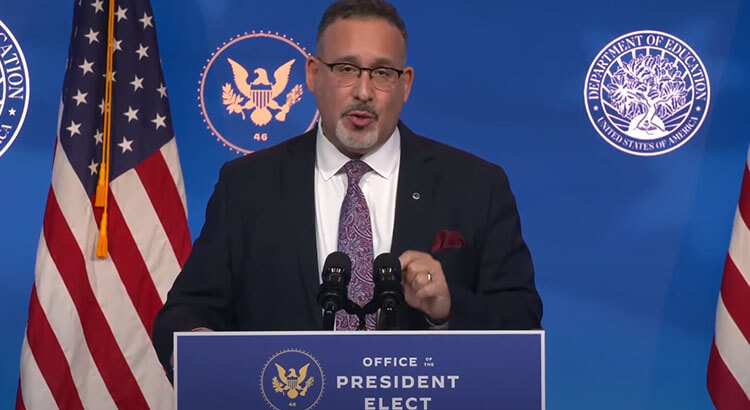 Miguel Cardona speaks after President-elect Joe Biden announced him as his nominee for Education Secretary at the Queen theatre on December 23, 2020 in Wilmington, Delaware. Cardona, the Connecticut Education Commissioner, will face the urgent task of planning to reopen schools safely during the COVID-19 pandemic.
ShareTweet

President-elect Joe Biden on Wednesday formally introduced his nominee for secretary of Education — Miguel Cardona, a veteran of public schools and the third Latino selected for the Cabinet.

“We knew we needed an education secretary who truly understands what it’s been like for educators, administrators, families, caregivers and students this past year,” Biden said at an event in Wilmington, Del., with Cardona, the commissioner of education in Connecticut.

Biden said that he wanted a secretary who has experience in the classroom as a teacher.

“We also need someone who knows what it takes to get through this crisis,” he said, adding that his administration hopes to have schools physically reopened within the first 100 days of his first term.

“We need to make sure that every child in this nation has access to a good education regardless of their ZIP code,” Biden said.

Cardona said that the coronavirus has exacerbated many long-standing disparities in education.

“The problems and inequities that have plagued our educational system since long before COVID will still be with us even after the virus is gone,” he said.

Cardona would replace Education Secretary Betsy DeVos, who served throughout the Trump administration and has come under intense criticism from Democrats for her advocacy of school choice and private schools.

Cardona has worked as an elementary teacher, teaching fourth grade, and as a principal and currently serves as the commissioner of education for Connecticut, to which he was appointed by Gov. Ned Lamont in August 2019.

He spent about 20 years as an educator in Meriden, Conn. He also served as the assistant superintendent for teaching and learning at Meriden Public Schools in 2013.

“For me, education was the great equalizer, but for too many students, your ZIP code and your skin color remain the best predictor of the opportunities you’ll have in your lifetime,” Cardona said.

If approved by the Senate, Cardona would be tasked with re-opening schools that have shuttered due to the coronavirus.

He would also be another high-ranking Latino appointed to Biden’s Cabinet, following the nomination of California’s Xavier Becerra as secretary of Health and Human Services and Alejandro Majorkas as secretary of Homeland Security.

Cardona would also be the second Puerto Rican to serve as the secretary of Education. John B. King, Jr., an Afro-Latino, led the department under the Obama administration.

Sen. Patty Murray (D-Wash.), ranking member of the Senate Health, Education, Labor, and Pensions Committee, said in a statement that Cardona has the experience to bridge the equity gaps that many students face and are experiencing during the pandemic.

“Dr. Cardona’s focus [on] education equity also means we’ll have a Secretary of Education who understands getting ‘back to normal’ isn’t enough,” she said.

“Students, parents, and educators nationwide have been thrown into uncertainty and chaos we’ve simply never seen before,” Murray said. “They need a Secretary of Education who understands their responsibility is to students, first and foremost, and who has the experience to help lead our nation’s schools out of this crisis in a way that deals head-on with the inequities leaving so many of our students behind.”

House Speaker Nancy Pelosi (D-Calif.) also commended Cardona for his experience in education policy and his service “at nearly every level of our education system.”

“Throughout his career, he has earned the respect of educators, families and policymakers for his leadership to advance equity in schools, promote bilingual education and address achievement gaps in under-resourced communities,” she said in a statement.

“His track record of success during the coronavirus crisis makes him well-suited to lead President-elect Biden’s mission to safely reopen our schools.”