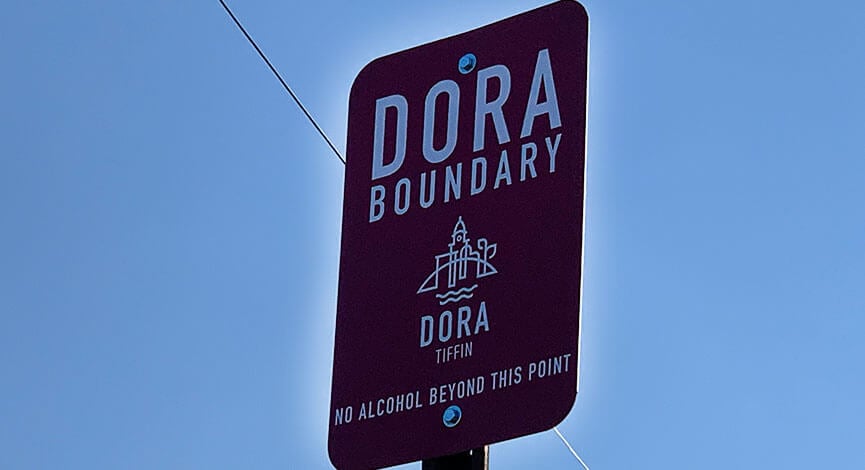 Council initially voted to establish the DORA program in June, and the program went into effect in July. The program allows patrons of liquor-permitted establishments within the DORA boundary to possess a specially marked open container within the designated area.

Tiffin’s DORA was set to expire at the end of December, but will continue into 2021 as a result of Monday evening’s vote.

Councilman Tyler Shuff, who introduced Ordinance 20-114, said the DORA program has helped local businesses stay afloat, particularly amid the COVID-19 pandemic in which restaurants and bars have had to operate at limited capacity after being allowed to reopen.

Mayor Aaron Montz encouraged council members to pass the ordinance, citing the positive economic effect the DORA program has had on local businesses.

The ordinance was passed by a vote of 5-2, with council members Steve Lepard and Ken Jones voting against.

Councilman Lepard expressed concern with the lack of TIPS training requirements in the ordinance for all restaurant/bar employees. TIPS is a training program designed to prevent intoxication, drunk driving and underage drinking by enhancing the fundamental “people skills” of servers, sellers, and consumers of alcohol.

Lepard also said he’s not happy with the boundary expansion included in the ordinance. The ordinance extends the DORA boundaries, adding 22Market, Red Raven, 145 Madison St. and 147 Madison St. (near Calvert High School), and the East Green and National Corner.

“My moral compass just does not play to the direction of DORA,” Lepard said.

Councilman Jones also expressed opposition to the boundary expansion included in the ordinance, and appeared to imply that those who disagreed with him lack “common sense.”

“I am still looking for three of our fellow council members to join me in turning this [Ordinance] 20-114 down at this time. And the reason I’m saying that, there’s no rush tonight to pass this,” Jones said. “If we turned it down tonight, we still have December, January, February, and March, during the winter seasons, in my opinion, hardly anybody is going to be using the DORA during December through March.”

“I guess I’m leaning towards Councilman Lepard, he seems to have common sense. Councilman Gillig, he’s a school teacher, he understands my reservations about it being in front of Calvert. Councilwoman Boyle, I’m hoping she’ll join to make four of us and turn this down at this time,” Jones said. “I am prepared for people saying ‘Councilman Jones, you’re against small businesses in Downtown Tiffin.’ I am for small businesses in Downtown Tiffin. I believe the small businesses should be tuning into our Zoom meetings and saying, ‘we do not need this in front of Calvert High School.'”

In response to Jones’ comments, Councilman Dan Perry said Calvert’s administration and school board are in favor of having DORA extended to 145 and 147 Madison St., in front of the high school building.

“Even though Councilman Jones doesn’t want Calvert to be apart of it, I don’t think he thinks Calvert can think for themselves,” Perry said. “And also, I think I’ve got pretty good common sense, and I think DORA is a great thing for the community. I would hate for these businesses to miss out on lost revenue if there is a nice day in January, February, March — that they could take advantage of DORA. While Councilman Jones just wants them to stand by and wait for us to pass another ordinance in March or April. I don’t think that’s right, I think we need to pass this thing tonight.”

Councilwoman Dawn Iannantuono said she wishes Councilman Jones would stop making disparaging comments about fellow council members. In addition to the “common sense” comment made during Monday evening’s meeting, Iannantuono referenced a previous meeting in which Jones referred to council members who disagreed with him as “bobble head dolls.”

“First we were bobble heads, and now if we don’t agree with him, we don’t have common sense. I’m really not happy about that comment,” Iannantuono said.

In regards to Councilman Lepard’s concerns about the TIPS training, Iannantuono said she initially wanted a TIPS training requirement as well, until she realized that restaurants and bars often experience high employee turnover, which she said would make the requirement inefficient for many small businesses participating in the DORA.

DORA beverages must be purchased from a participating liquor licensed establishment within the designated district; maps are available at participating vendors and signage is posted at the boundaries of the DORA area.

The only open container allowed is the designated, specially marked DORA cup purchased from a participating establishment, and a DORA cup cannot be brought into another liquor licensed establishment.