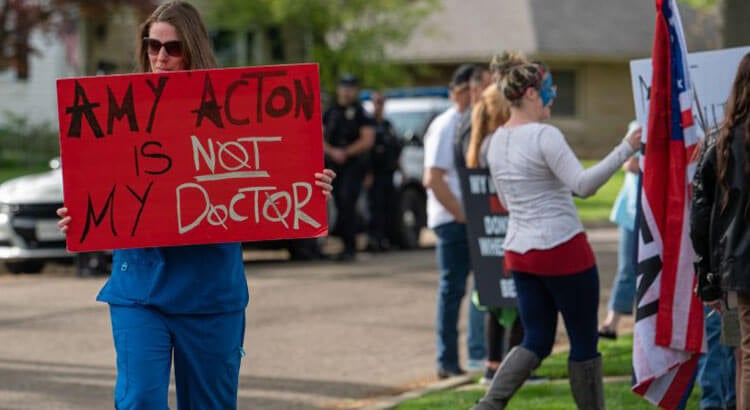 When it comes to pandemic politics, Ohio’s anti-vaccine activists are everywhere.

They’ve crowded legislative hearings on bills to strip the health department of its authority to issue public health orders to stave off infectious disease.

Members have protested various coronavirus restrictions at the Capitol steps as well as the personal homes of both Gov. Mike DeWine and former Ohio Department of Health Director Dr. Amy Acton.

In September, several citizens filed a federal lawsuit, rich in conspiracy theory and misinformation, seeking to overturn all COVID-19-related public health orders and award $75,000 in damages to each of eight plaintiffs. An Ohio Capital Journal investigation has revealed several ties between the lawsuit and Health Freedom Ohio, one of two prominent anti-vaccine political groups in the state.

U.S. District Judge James G. Carr is overseeing the lawsuit, which ODH attorneys referred to in court documents as attacks that are “simply partisan, personal opposition to the steps the State of Ohio has taken to protect its citizens from the onslaught of COVID-19 pandemic.”

Anti-vaccine groups have spent years attacking school and workplace immunization requirements, counting some of the more conservative statehouse Republicans as political allies. As the pandemic emerged, the groups redirected their focus toward curtailing a state law that gives ODH broad public health power.

The target is different, but the tactics of misrepresentation and distortion of health information is the same.

“They very quickly have pivoted from an anti-vaccine message to an anti-mask, anti-lockdown message of disinformation around COVID-19,” said Rep. Allison Russo, D-Columbus.

Their efforts, arguably, have proven successful. Lawmakers recently passed legislation that would defang ODH’s public health authority after several anti-vaccine leaders testified in support of the bill and other, similar legislation. Acton resigned in June and has kept a low profile since then.

When it came time for House State and Local Government Committee Chairman Scott Wiggam to summon citizens to speak in favor of House Bill 618, which would require legislative approval before public health orders can take effect, the first three names he called were all executives of Ohio’s anti-vaccine groups: HFO and Ohio Advocates for Medical Freedom.

It was far from unusual. The anti-vaccine crowd has offered testimony in support of a string of legislative attempts to curtail ODH’s power to fight infectious disease. Wiggam did not respond to inquiries by phone or email.

In an interview, HFO President Michelle Cotterman, a registered nurse who does not wear a mask at the Statehouse, objected to the term “anti-vaccine.”

She said she and members support “medical freedom.” Her objection, she said, is not with vaccines but with entities like employers or schools using “force” to compel students or workers to take them.

Barry Sheets, an HFO lobbyist, told the committee that contact tracing — the practice of determining who may have come into contact with an infected person — amounted to an infringement of rights under the First Amendment to the U.S. Constitution when they ask “penetrating questions about your personal health.”

Sheets is currently registered as a lobbyist on six bills that would reshape how the state health department can respond to the pandemic, as well as three bills and one legislative resolution that relate to vaccines. (Lobbying records do not specify whether a lobbyist supported or opposed legislation.)

The Cincinnati Enquirer reports that Sheets played an outsize role drafting legislation last year permitting health insurance to cover reinserting a fertilized egg that attaches outside the uterus — called an ectopic or tubal pregnancy — into the uterus. Obstetricians and gynecologists say this is medically impossible.

Nadera Lopez-Garrity, vice president of HFO, spoke as well. She incorrectly claimed COVID-19 has been in Ohio since Nov. 12, 2019 — despite ODH data tracing the first case back to Jan. 2, 2020. Garrity cited this faulty timeline as evidence showing how Ohioans lived with the disease for months without problems before the March and April lockdowns.

She also expressed support for the “herd immunity” theory, in which officials remove all guardrails and let the disease run its course while protecting the vulnerable until enough people have been infected that COVID-19 runs out of viable hosts.

An epidemiologist told Nature the idea would lead to massive loss of human life and “unacceptable and unnecessary untold human death and suffering.”

A citizens group called Ohio Stands Up made headlines in September when it filed a lawsuit challenging the “absolute tyranny” of orders like the statewide mask requirement.

There are several links between the group and Health Freedom Ohio: two Ohio Stands Up members are listed in an HFO directory; one other member writes blogs for HFO; and lawyers handling the lawsuit conferred with HFO leaders in October.

The lawsuit alleges a shadowy conspiracy theory in which COVID-19, which has killed more than 266,000 Americans since March, is no different than the flu, which kills about 35,000 Americans per year. The government, as alleged in the suit, is knowingly disseminating “misleading information” to overhype COVID-19.

The suit claims the real death count of COVID-19 is closer to 15,000 (as of an October filing), far from estimates from internationally and historically revered institutions like the CDC, the World Health Organization or Johns Hopkins University.

Ohio Stands Up argues that while the current death count is an accurate representation of the people with COVID-19 who have died, the majority of those deaths are attributable to fallout from government responses to the new coronavirus — not the virus itself.

“These increases [in deaths], however, are not due to COVID-19, rather they are due to the incredibly unconstitutional abridgement of our freedoms that has occurred and the inability of a state and nation to adapt to the foundational freedoms we have grown to rely on being shattered,” the lawsuit states.

According to the CDC’s COVID-19 case definition, to be considered a COVID-19 death, a person must die, and his or her death certificate would list the disease or the virus that causes it as “a cause of death or significant contribution to death.”

The suit contains other debunked ideas, like that masks, even N95 respirators that physicians wear while treating COVID-19 patients, don’t work. Or that COVID-19 was first detected in Pike County, Ohio in November 2019.

At least two plaintiffs in the suit, Jessica Franz and Renee Hedges, are listed as HFO members in a group directory reviewed by the Ohio Capital Journal. Another plaintiff, Eric Calderaro is an HFO blog writer, according to Cotterman, the HFO president. Calderaro’s wife, Tara, is a plaintiff as well.

Cotterman denied any affiliation between HFO and Ohio Stands Up.

“We are not affiliated with Ohio Stands Up,” she said. “We are supportive of the lawsuit. We agree with the direction that they’re going in.”

Heather Coy, a lawyer who is a member of HFO, said in a brief interview that the group was not directly involved in the lawsuit.

“We were originally involved in that, but then were not really,” she said.

The plaintiffs crowdsourced legal fees via a GoFundMe page. Analysis from CrowdTangle, a Facebook-owned social media analytics tool, shows the Ohio Advocates for Medical Freedom’s Facebook page drove the bulk of the Facebook engagement of the fundraiser.

Jason Hedges, who organized the GoFundMe, is listed in HFO’s membership directory. He did not respond to questions through the GoFundMe page.

“As a representative for my plaintiffs I am pushing my message anywhere I can – that certainly does not mean any of these groups are involved in the suit,” Renz said.

The lawsuit marks the first appearance in federal court for Renz, who passed the bar examination in November 2019 on his fifth attempt since 2011, per a records request with the Ohio Supreme Court. His “about me” page lists no legal background beyond working as a clerk for Justice Tarun Chatterjee of the Indian Supreme Court. In an email, Renz said he did not remember when he served on the court and declined to provide evidence of his service in India.

“The best I can tell you is that I was there, have lots of pics, a great certificate signed by the Justice, and it was an amazing experience,” he said.

In a recent interview, Renz said he has been “converted” to the “medical freedom” movement.

Renz claimed to an independent media outlet that publishes conspiratorial content that he put at least 2,000 hours into the case between March and August alone. Tara Calderaro, an Ohio Stands Up plaintiff, posted on Facebook that the group is paying Renz $300 per hour.

Tara Calderaro declined to comment and referred questions to Renz, who told the Ohio Capital Journal he was unaware of the Facebook post (which has since been deleted or made private) and disputed its accuracy but declined to provide details on his total billings on the case.

Co-counsel Gargasz, a more seasoned hand in federal court, lost election in November to serve as Lorain County prosecutor. He ran on a platform of “disdain” for socialists and has called for “Marxists anarchists” and “communists” to be shot and “stacked like cordwood.” Calls to his law office were not returned.

COVID-19 is a jungle and vaccines are the fastest way out.

Three vaccine candidates have released promising results. Pfizer and BioNTech jointly submitted a request to the Food and Drug Administration to allow its vaccine, which the companies say is about 95% effective, to market.

Vaccines are overwhelmingly safe. They can produce side effects, though data from the National Vaccine Injury Compensation Program shows these are exceedingly rare. For instance, between 2006 and 2018, more than 108 million Americans received the MMR vaccine, which immunizes against measles, mumps and rubella. About 260 people filed injury claims, less than 130 of which yielded any compensation.

Their benefits, meanwhile, are vast: A 2014 CDC report estimated vaccinations will prevent more than 21 million hospitalizations and 732,000 deaths among children born in the last 20 years.

The anti-vaccine movement has spent decades overamplifying vaccination risks, and is now downplaying the threat of COVID-19.

On 8 a.m. the day the House passed Senate Bill 311 and sent it to the governor, ODH’s chief medical officer and an executive with the Ohio State University’s Wexner Medical Center urged lawmakers against passing the bill. They said it would hamstring ODH’s ability to respond to the pandemic.

Russo alleged in an interview that Ohio’s political power seems to place anti-vaccine voices on an even plane with the public health community.

They now have a foothold of influence, a daunting prospect as a vaccine nears. She said it’s time for those in the public health and scientific communities to engage politically as a counterweight.

“Public health has to be more engaged in the political realm,” she said. “That is incredibly naïve to think public health can have a loud and significant and meaningful voice if they don’t engage with elected leaders.”