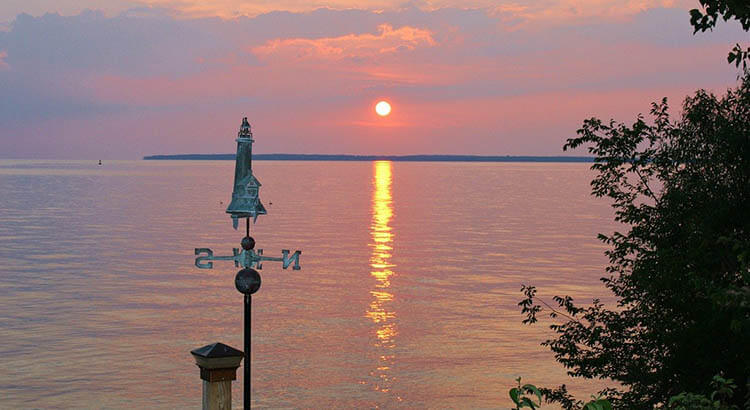 Washington, D.C. — Bipartisan members of Congress from Ohio and the Midwest are leading a regional push to shore up the Great Lakes, which have been battered by coastal erosion in recent years.

U.S. Rep. Marcy Kaptur, the dean of Ohio’s congressional delegation and co-chair of the Great Lakes Task Force, points to an Ohio-led effort to strengthen the Great Lakes Restoration Initiative, the largest investment in the region.

Created two decades ago, the program cleans up pollution, curbs invasive species and takes other steps to preserve and protect the lakes, including restoring wetlands and natural habitats to improve coastal resilience.

“We need to have more funding for the GLRI,” Kaptur, a Democrat, told the Ohio Capital Journal. To protect the coast and prevent damage from high water levels, Congress needs to invest in “living shorelines” created by dunes, native plants and natural barrier reefs, she said.

House lawmakers are seeking a boost to $335 million for the program — the amount included in a spending bill that funds the U.S. Environmental Protection Agency and other departments.

Full-year funding for fiscal 2021 is not yet final, with the government now operating under a stopgap spending bill. On Tuesday, a U.S. Senate committee recommended $320 million for the program, and Anderson said he is “hopeful” about the final figure, given its bipartisan and bicameral support.

In February, the House approved separate legislation that would increase authorization levels for the initiative during the next five years. Authored by Ohio Rep. David Joyce, a Republican, and backed by the state’s entire congressional delegation, the bill would increase authorized funds to $375 million in fiscal 2022 and $25 million more per year until 2026.

The Senate hasn’t acted on that bill, despite support from Sens. Sherrod Brown (D-Ohio), Rob Portman (R-Ohio) and other senators. If it doesn’t pass before Congress adjourns for the year, supporters will have to start fresh next year.

Chris Korleski, director of the Great Lakes National Program Office at the EPA, isn’t too concerned about the program’s funding levels.

Congress has been “very supportive” of the program for both economic and environmental reasons, he said in an interview. It has been fully funded since its inception two decades ago, first on an annual basis and then under a reauthorization that sunsets in fiscal 2021.

“I like to think we’re going to be shaking and baking for the foreseeable future,” he said.

Meanwhile, the GLRI is placing a greater emphasis on erosion and trying to better predict the possible impacts of higher lake levels and greater wave action, he said.

Lawmakers have also introduced legislation that would direct the U.S. Army Corps of Engineers to study threats to coastal communities, but it has not received a vote in either chamber.

Erosion is worsening along the so-called Third Coast in Ohio and other Great Lakes states, which include Minnesota, Wisconsin, Michigan, Indiana, Illinois, Pennsylvania and New York.

Precipitation has risen 10% in the Great Lakes Basin over the last century — far more than the 4% rise nationally, according to the Environmental Law and Policy Center.

Higher water levels have exacerbated erosion, caused flooding and damaged infrastructure in the region. Last year, water levels reached 3 feet above average, placing “enormous stress on coastal communities and regional economies,” Brown, Portman and other senators wrote in a letter to Senate colleagues about erosion and other issues affecting the region.

In Ohio, record-high water levels in Lake Erie and stronger and more frequent storms have caused erosion along the state’s 312-mile Lake Erie shoreline, according to Stephanie O’Grady, a spokeswoman with the Ohio Department of Natural Resources. That has damaged the state’s coastal infrastructure and led to a loss of property, she said in an email.

To address these problems, the ODNR periodically measures coastal erosion to identify at-risk areas and to discourage development, she said. It has also implemented a temporary program to allow coastal property owners to install temporary emergency shore protection to prevent catastrophic erosion.

GOP Gov. Mike DeWine, meanwhile, has initiated a program to buffer the shore from high waves in Lake Erie and the Sandusky Bay, and the state is coordinating efforts with the National Oceanic and Atmospheric Administration and the Buffalo district of the U.S. Army Corps of Engineers.

Kaptur says more needs to be done to address what she called a “complicated agro-environmental challenge.” Lake County alone needs $20 million to $30 million to address erosion on land along Lake Erie, Anderson said.

But the region’s needs are often overlooked by the federal government, she said.

Conversations about coastal erosion often get drowned out by faster-moving stories about hurricanes and wildfires.

And the ocean coasts get more attention in Congress because they have larger — and more powerful — representation. Indeed, three of the four top leaders in the House and Senate are from the East and West coasts, and President Donald Trump and President-elect Joe Biden also reside there.

As a result, the Great Lakes “can get lost in the national discussion on coastal resilience,” she said. “We have to fight harder to get traction.”

Trump, she noted, tried to eliminate funding for the initiative earlier in his tenure.

The administration now supports the program, Korleski said. But Kaptur, who was interviewed prior to the conclusion of the election, predicted that Biden would go farther.

She also wants to add “Great Lakes” to the name of the Saint Lawrence Seaway Development Corporation — a government corporation that operates and maintains the waterway between the Atlantic Ocean and the Great Lakes — to build understanding of and support for the region. Legislation that would do so passed the House and awaits action in the Senate.

“Members don’t know where it is,” she said.