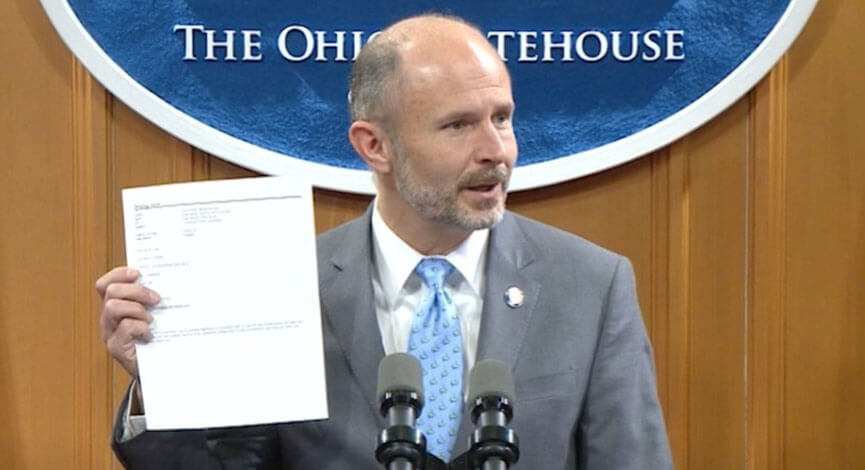 A Republican state senator says Ohio should strike down a recent order from the state health department requiring businesses to take a heavier hand in enforcing mask mandates for customers.

Sen. Dave Burke, R-Marysville, told the Ohio Capital Journal a bill will soon be introduced to achieve just that, the latest in a string of proposed laws targeting the health department’s authority in responding to the ongoing pandemic.

The state mask mandate itself is not under threat, Burke said. But the legislator takes issue with a recent health order first outlined by Gov. Mike DeWine in an evening televised address on Nov. 11.

That order does several things:

“Every Ohioan has the right to know that stores and businesses they enter are as safe as possible,” the order reads, “and that the state is taking the steps necessary to keep Ohio’s economy functioning.”

As with previous health orders, this one cites Ohio Revised Code section 3701.13, which gives the state health department authority to “make special or standing orders … for preventing the spread of contagious or infectious diseases.” DeWine and ODH have used this section of code numerous times in 2020 to order certain businesses to close and mandate that Ohioans wear face coverings in public.

Now the statute is being used to make businesses enforce compliance with that mask mandate. Burke thinks it is an individual’s responsibility to follow the order, not the responsibility of businesses.

“The liability should rest with the person,” he said, arguing that 3701.13 is being stretched too far.

“If you can get (this business mandate) out of that section of code, please show me,” Burke continued. “Where do you even get the authority to do that? This has just gotten so absurd.”

The Capital Journal has asked a governor’s office spokesperson for comment.

DeWine has pledged to veto any bill targeting the ODH’s pandemic authority and presumably would reject this law should it reach his desk.

Burke operates a pharmacy in his hometown and said he looks at the issue as a small-business owner, health care professional and state lawmaker.

Like other Republicans serving in the Ohio Statehouse, Burke has grown increasingly frustrated at what he believes are “totally subjective” health orders carried out by an executive branch not communicating with the legislature.

Respectfully, the lack of communication between ⁦@MikeDeWine⁩ with the House/Senate is what’s really harming Ohioans. Both Chambers are at the ready but we only get worked around. It’s not political, it’s sad. The result is exactly what’s occurring. https://t.co/nTMQCK6CUk

The discord between DeWine’s office and Republican legislators reached a boiling point last week with the passage of Senate Bill 311 in the Ohio House of Representatives. (It previously passed the Ohio Senate.)

That bill would prohibit ODH from issuing widespread quarantine orders and would give lawmakers the chance to rescind certain health orders they disagree with.

DeWine called the bill a “disaster” and said limiting ODH’s power would put Ohioans’ lives at-risk. He plans to veto the bill, though Republicans have veto-proof majorities in both legislative chambers should they choose to override the governor’s decision.

Republican lawmakers, including the SB311 sponsors, have said the bill is about providing “checks and balances” on the executive branch. Many echoed Burke’s criticism that DeWine is not engaging enough with the legislative branch to allow other Ohioans’ voices be heard.

“I understand the governor’s dealing with a lot,” Burke told the Capital Journal. “But the biggest problems we’ve ever dealt with involved being a team.”

Burke is closing out his final term representing the 26th District, which features seven counties in north-central Ohio. The legislative term ends on Dec. 31.