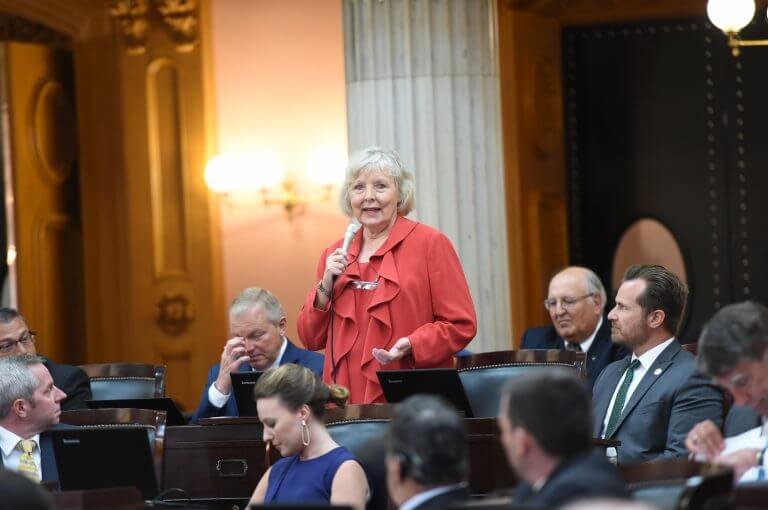 There’s a whole story to tell about COVID-19 beyond just the “scary” stuff the Ohio Department of Health releases every day, said Rep. Diane Grendell.

It’s time for ODH to tell both sides of the story regarding the pandemic that has killed more than 250,000 Americans, according to the Geauga County Republican, not just the “one-sided” items like deaths, hospitalizations, and infections.

“We believe the data has been corrupted,” she said to the Senate Government Organization Committee on Wednesday.

“The CDC is in the process of going through every COVID-19 case and only three states have such, what they call, corrupt data: New York, Kentucky and Ohio.”

In an interview, Grendell, said she learned this information via one source inside the CDC and one source outside the agency. She declined to identify them. She said the investigation has to do with ODH’s case definition of COVID-19 but offered no further details.

In a statement, the Ohio Department of Health flatly denied that the CDC is investigating the department.

“The claim made about CDC investigating Ohio’s COVID-19 data is false,” said ODH spokeswoman Melanie Amato. “The Ohio Department of Health remains committed to transparency when it comes to providing data and has consistently followed the CDC guidance on how that data is and should be reported.”

The CDC did not respond to inquiries.

Grendell’s comments were made in support of her “Truth in COVID Statistics” bill, which would force ODH to publish certain data points about COVID-19 — most of which ODH already publishes.

All told, nearly 5,900 Ohioans have died from COVID-19 since March. Grendell said ODH should also publish the number of deaths per day. However, ODH publishes this number in its COVID-19 dashboard.

“The number of confirmed daily deaths caused by COVID, the cumulative number is so scary, but the actual number of course, is not scary,” Grendell said.

She claimed that you’re “far more likely to die of flu than you are from COVID” — in the face of the fact that about 2,300 Ohioans die per year from the flu.

She also told the committee that mysterious figures are paying college students to get tested.

“Did you know they’re paying college students $20 to get tested?” she said to the Senators. “Which, you know, I think that’s fine they’re getting tested, but you know, they’re making positives even though there are no symptoms and they aren’t sick.”

Grendell declined to identify which colleges are using this alleged practice.

Most the information that the legislation demands is available on ODH’s website, although some of it requires some simple arithmetic.

For instance, Grendell alleged ODH censors the number of people who are infected and don’t require hospital care. However, ODH publishes number of hospitalized cases and the total number of cases. Subtract the former from the latter and there you have it.

Some of what her bill demands is already available from ODH, like the daily test positivity rate — and the total of number of tests (which the legislation also demands).

In her interview, Grendell, 75, expressed frustrations and difficulties with accessing this information from ODH.

House Bill 624 would force ODH to publish a new piece of information — the number of people who died with COVID-19 and a comorbidity.

Here, Grendell falsely claimed that people who have COVID-19 are dying of other causes. In reality, people with underlying conditions are more vulnerable to COVID-19. As many as 6 in 10 Americans have one of these long-term conditions like obesity, heart disease, COPD, diabetes and others. About 4 in 10 have two or more of these conditions.

The CDC’s case definition of a COVID-19 death requires a death certificate to state COVID-19 was a “cause of death or a significant condition contributing” to death.

“The daily COVID death numbers are but a small fraction of the overall daily numbers,” Grendell said. “But the way they are reporting them makes it appear that COVID is the primary cause of death, and it clearly is not.”

She also criticized modeling the health department released roughly seven months ago that she said overestimated the caseload. Her legislation would force ODH to release the methodology of the modeling.

The Cincinnati Enquirer reported in August that Ohio had stopped relying on modelling to guide policy decisions — instead, officials use the Public Health Advisory System, which is comprised of real-time metrics like new case rates and hospital visits.

The House of Representatives passed Grendell’s bill in June on a party line 61-34 vote. During committee, a potpourri of proponents testified on its behalf including Tim Grendell (Diane Grendell’s husband and a court of common pleas judge) and various individuals affiliated with Ohio’s anti-vaccine political groups.

Grendell has served on and off as a state lawmaker and state appellate court judge. She has no background in medicine or infectious disease.

Skepticism of COVID-19 data, while unfounded, has been echoed by Republicans throughout Ohio’s state government, largely without evidence.

A state Senator referred to ODH’s “fake data” in an interview. The state auditor is probing the accuracy of ODH’s data. The former House Speaker baselessly claimed ODH inflated its case counts by a factor of somewhere between two and 15.

Sen. Kristina Roegner, R-Hudson, who is a lead sponsor of separate legislation attacking the health department, said in committee she supports what Grendell is doing with her bill.

Wrapping up her testimony, Grendell said the legislation will help ensure the public knows the truth about what’s happening.

“An informed public is the essence of a working democracy,” she said.