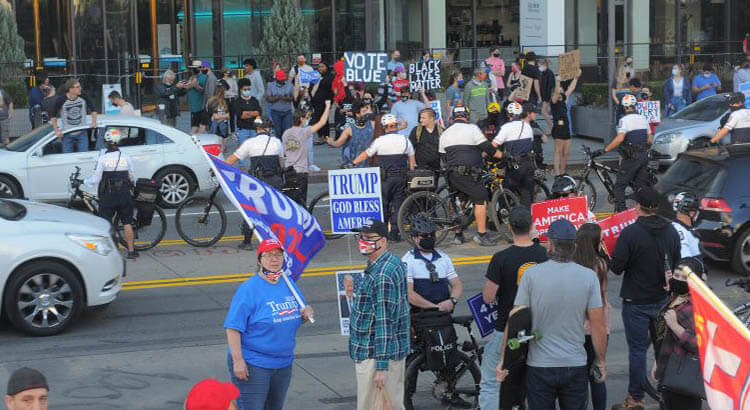 Scene outside the Ohio Statehouse on Saturday after the Associated Press declared Joe Biden the winner of the presidential election. By Jake Zuckerman / Ohio Capital Journal
ShareTweet

The reality is that many Democrats opted to vote by mail, and states like Pennsylvania have laws preventing elections officials from processing ballots before Election Day.

In battleground states like Michigan and Wisconsin, this trend produced the appearance of an early lead for Trump based on ballots cast on Election Day, and a steady tapering and eventual reversal of this lead as mail-in ballots were processed and counted.

Americans voted early in person, through the mail and via drop boxes in historic numbers as the new coronavirus continued to rage through the U.S.

In Ohio, which allows boards of elections to prepare (but not count) early vote ballots before Election Day, Biden carried the state through Tuesday evening because the Democratic-rich early vote ballots were counted first, until predominantly Republican Election Day votes reversed the trend until Trump won by about eight points.

None of the Ohio politicians alleged fraud to have occurred in Ohio specifically.

All the representatives named below did not respond to requests through email and social media to either offer evidence to substantiate the claims or clarity on what they meant.

An Ohio Republican Party spokesman did not respond as well. On Monday morning, a party social media account shared a link to followers urging them to donate to Trump’s legal fund to stop Democrats from trying to “steal” the election.

In a series of Friday morning Twitter posts, Wiggam said the “chaos” of the election was “intentional” and described an “illegitimate” election “made meaningless through fraud.”

He later claimed there are “thousands of fraudulent reports” coming in, like people “ordered to back date ballots” in Pennsylvania or a Las Vegas postal worker purportedly handing out a handful of ballots on request.

On Thursday, Zeltwanger shared a tweet from a U.S. Senator saying the last 24 hours made clear that “we need new election integrity laws.”

He shared another from the president’s son, Eric Trump, seemingly implying electoral malfeasance from Milwaukee, Detroit, and Atlanta and Philadelphia.

Mail-in ballots in those three cities leaned Democratic, tipping their states toward Biden. However, Zeltwanger added the caveat that he has “not had the time to fact check this statement.”

According to Powell, two theories explain the electoral outcome:

“Either they have unprepared and incompetent voting systems (which is cause for concern) or they needed time to find enough votes to deny Trump a second term,” she wrote on Twitter. “Either way, it’s concerning and we need answers.”

Votes shouldn’t be counted “in the shadows,” both states and news outlets need to “quit stalling” and “call the Red states for Trump now,” Cross wrote on Twitter as votes were being counted Thursday afternoon.

Several counties have livestreams available to watch administrators count ballots, and election observers are allowed inside as well.

As of Sunday, Cross’ Twitter profile is no longer available.

On Thursday morning, Keller shared a picture of a garbage can with envelopes inside it.

Attached to the picture, she accused Democrats of “outright cheating by fabricating fake ballots with late mail-in dates from dead people born in 1863.

“Trump was re-elected. He will be inaugurated in January 2021,” she wrote on Wednesday.