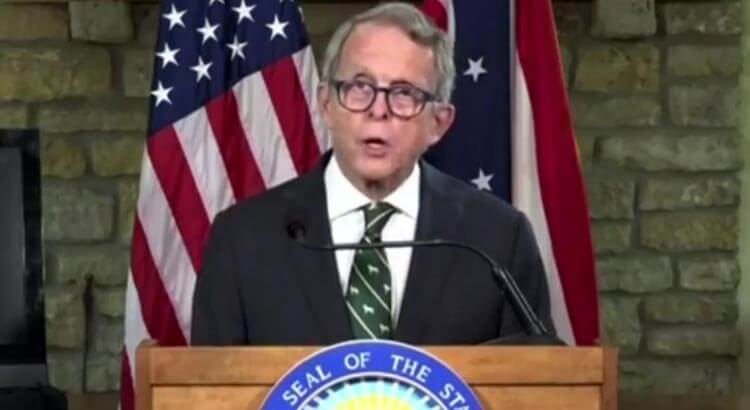 Ohio has reached another crossroads in the battle against COVID-19.

Gov. Mike DeWine is once again caught in the middle as the state repeatedly sets new records for virus cases and hospitalizations. After months of a decentralized approach and emphasis on personal responsibility, DeWine now says Ohio faces “a monumental crisis.”

As much as the governor has implored Ohioans to come together in fighting this pandemic, the Ohio Statehouse remains as polarized on the subject as ever. Within the private sector, the specter of more closures is already facing backlash from industry leaders who fear the economic devastation of shuttering businesses a second time — this time in the absence of government stimulus checks or forgivable PPP loans to aid with payroll costs.

There are also the myriad legal challenges facing DeWine’s administration, with the governor contemplating new health orders while still battling in the courts over previous ones. The Ohio Department of Health (ODH) is still seeking to overturn a Lake County Common Pleas judge’s decision that threw out a health order closing gyms in the state.

Facing criticism seemingly from all sides, DeWine must decide among these choices: stay the course, urging Ohioans to abide by safety guidelines such as wearing masks and staying socially distant; or, step in again and re-issue temporary shutdowns of certain businesses and prohibitions on certain types of gatherings.

Multiple times in his statewide address last Wednesday and his briefing with reporters the next day, DeWine telegraphed plans to do the latter.

“At the rate we’re going, this is not sustainable,” he said. “We’re going to have very bad consequences if this thing continues to go up at the rate it’s going … We have to take action. It would be totally irresponsible at this point not to take actions.”

Those actions, the governor has suggested, could include shutting down bars, restaurant dining rooms and fitness centers. He also committed to issuing new health orders regarding social gatherings at events such as weddings and banquets. The specifics are not yet known.

DeWine reaffirmed that Ohio remains in a state of emergency, and re-issued the statewide mask mandate to demand businesses be more vigilant about customer enforcement.

He said a decision has not yet been made on whether to close some businesses again, adding that his administration plans to review the data in a week to see if such drastic steps need to be taken.

Ohioans heard contradicting information about bars and restaurants from the governor’s press conferences last week. DeWine said on Thursday he has personally seen evidence indicating spread is taking place at those types of businesses.

But an earlier news conference featuring various health experts offered a much different message. The medical experts declined to endorse the need for any new shutdowns when asked by reporters.

DeWine, however, argues those businesses are uniquely risky. As temperatures drop and customers retreat to indoor dining rooms, he said spread can happen because patrons spend long periods of time eating and drinking without masks on. This is contrasted with retail stores where customers stay moving and do not take their masks off.

The Ohio Restaurant Association is already warning of the dire effects another shutdown on dining rooms could have on the industry. A news release issued after DeWine’s statewide address cited an Ohio survey showing 56% of restaurant operators “do not believe their business can survive into 2021 under current conditions.”

“Any discussion of another restaurant closure is inconsistent with any science or contact tracing data that we have been provided,” the association claimed, “which continues to detail the greatest risk of transmission is occurring in private gatherings that are unregulated.”

The association quoted Thomas’ words as evidence further shutdowns are not necessary.

DeWine did not cite specific examples of data indicating spread at bars and restaurants, though some medical data points to this being the case. One study from the Centers for Disease Control and Prevention (CDC) in September concluded that adults who tested positive for COVID-19 were twice as likely to have dined at a restaurant as adults which tested negative.

“Eating and drinking on-site at locations that offer such options might be important risk factors associated with (coronavirus) infection,” the study concluded.

The political tug-of-war continues on how the state of Ohio should best proceed.

The coronavirus response is viewed within the statehouse along partisan lines, with Democrats defending the state health department and Republicans concerned about government overreach of personal freedoms. House Minority Leader Emilia Strong Sykes, D-Akron, has called for DeWine to develop a more aggressive, statewide plan to handle the pandemic rather than turning to local strategies.

“With the high cases of COVID-19, I thought for sure Gov. DeWine was going to increase the restrictions even more than presented this evening,” state Rep. Juanita Brent, D-Cleveland, opined after the governor’s televised speech was over.

State Rep. Jena Powell, R-Arcanum, a frequent critic of the governor, pushed back on DeWine’s warning of more government action to slow the spread and said “Ohioans want freedom.”

A Democratic colleague, Rep. Casey Weinstein of Hudson, responded to Powell: “Ohioans also want the freedom to not get COVID.”

Weinstein and Democratic colleague Kent Smith, D-Euclid, took the opportunity Wednesday to push again for DeWine to mandate that masks be worn in the Ohio Statehouse. Though masks are required in all other public spaces in Ohio, DeWine has said the separation of powers do not allow him to dictate rules of the legislature.

The second wave is coming for my family and I urge you all to take this serious. Wear a mask, social distance, and avoid any gatherings. Even if it’s with family

Republicans like Powell and Rep. Susan Manchester of Waynesfield want DeWine to simply get out of the way.

“We cannot go backward. We must move forward,” Manchester wrote online after the governor’s address. “Ohioans will make the best decisions for their health and safety, armed with the knowledge we now have. One-size-fits-all mandates ignore the tremendous sacrifices that individuals, schools, and businesses have made to flatten the curve and slow the spread. We must allow local entities to make the best decisions for themselves and their communities.”

Another Republican, Rep. Jeff LaRe of Violet Twp., is taking a different track. He agrees that keeping businesses and schools open should be a priority, and is encouraging Ohioans to take the “necessary steps” to slow the spread:

We need to keep our businesses and schools open. If wearing a mask and social distancing makes a difference in whether these establishments can continue to operate then we all need to take the necessary steps to support them. pic.twitter.com/3AXVugnBJs

Legislature keeps pushing, and 2021 could be challenge for DeWine

With GOP majorities in the state legislature, the clash between DeWine and Republican legislative critics goes beyond social media posts. Even as a surge in cases and hospitalizations is evident, lawmakers continue to push legislation during the ensuing lame-duck session that would restrict the state’s ability to handle a pandemic.

On Tuesday, a House committee favorably reported a bill to the whole body that would directly impact any future shutdown orders were it to be enacted. House Bill 621, co-sponsored by Republican legislators Jon Cross of Kenton and Shane Wilkin of Hillsboro, would prevent any business from being shut down by an Ohio Department of Health order so long as the business can comply with any required safety precautions.

The bill was approved by the State and Local Government Committee along party lines just hours before Ohio set another record for most new cases reported within a one-day period.

Another bill targeting health orders will get consideration next week. House Bill 618, introduced by Rep. John Becker, R-Union Twp., would require that health orders issued by the governor and state health department be approved by lawmakers in order to take effect. It would also invalidate any order currently in effect as of when HB 618 is enacted.

Becker said the bill is scheduled to get a hearing in the House’s State and Local Government Committee next week. The committee is led by Rep. Scott Wiggam, R-Wooster, another leading critic of DeWine’s coronavirus policies throughout 2020. In a recent interview with the Capital Journal, Wiggam questioned the validity of Ohio’s coronavirus data and suggested the attention given to the virus might be politically-oriented to hurt Donald Trump as president.

Republicans continue to push for other pieces of legislation as the term comes to a close next month. One example is Senate Bill 311, which would allow the General Assembly to rescind certain health orders related to pandemic response. It would also prevent the state health department from issuing sweeping quarantine or isolation orders that would impact those who are not sick or have been directly exposed to a virus. That bill passed the Senate and still needs House approval to reach DeWine’s desk.

The governor has threatened to veto any such bill, and Republicans have rarely amassed enough support this year to override a veto. DeWine may be in for a tougher time in 2021. Republicans gained a few seats in the Ohio House this election cycle, buttressing their supermajority as they head into a new term.

And so the political split continues, with no sign of resolving in the months ahead.

“The solution today is taking away Governor DeWine’s emergency powers,” Powell wrote on Wednesday evening. “The solution in two years is to not re-elect Mike DeWine.”

While DeWine considers further actions that could impact Ohio businesses, his health department is in court defending orders from earlier this year.

Specifically, ODH has appealed a Lake County judge’s decision from May 20 which tossed out the state’s order closing gyms.

“The (ODH) director has no statutory authority to close all businesses, including the plaintiffs’ gyms, which she deems non-essential for a period of two months,” wrote Judge Eugene Lucci. “She has acted in an impermissibly arbitrary, unreasonable and oppressive manner and without any procedural safeguards.”

The ruling is now under review by the 11th District Court of Appeals and could become one of the first major rulings on the health department’s ability to issue health orders.

ODH lawyers argued the ramifications of Lucci’s ruling could effectively “neuter” ODH’s ability to respond to the pandemic.

“The General Assembly simply lacks the agility and flexibility — not to mention the expertise and experience in matters of public health — needed to respond to a pandemic,” ODH lawyers wrote.

Ohio law gives the health department director “ultimate authority in matters of quarantine and isolation” and allows he or she to issue orders “for preventing the spread of contagious or infectious diseases.”

The gyms have filed a motion to dismiss the appeal on procedural grounds. In their original filing, they argued the law is impermissibly vague and amounts to a breach in the separation of powers, given the executive branch (ODH) too much power.

It also accuses ODH’s unique targeting of gyms as “arbitrary” — ODH allowed gyms to reopen later than other businesses.

In the gym litigation, an ODH official testified that gyms pose unique dangers in spreading COVID-19: people working out don’t wear masks and they breathe more forcefully, which would take aerosolized virus with it.

Gyms also have unique settings like saunas and locker rooms, which could be more prone to spread, the state argued.