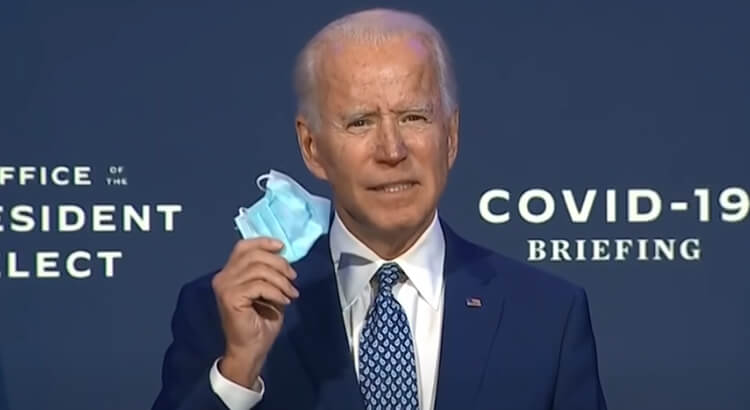 WASHINGTON — President-elect Joe Biden’s coronavirus response plan seeks to put a national mask mandate in place by calling on all governors to require face coverings in their states.

It’s a move that public health experts say could dramatically reduce the number of COVID-19 infections and deaths.

But putting wider mask laws in place would be difficult if not impossible, given the resistance already in many states. On the federal level, Congress has shown little interest in mask requirements, and an executive order from Biden requiring face masks would be legally shaky, according to an analysis from the Congressional Research Service.

In his public remarks and on his transition website, Biden has said his approach would be to urge governors and mayors to enact their own mandates that residents wear a mask when around people who aren’t from their household. Biden, who regularly wears a mask, intends to begin reaching out to governors as soon as this week to begin his personal-persuasion campaign, according to NBC News.

A majority of states already have mask mandates. But Biden would have limited authority to convince skeptical, Republican-led states to implement such a requirement if they haven’t done so, with U.S. cases now topping 10 million.

In his first public remarks after Saturday’s victory speech, Biden repeatedly urged Americans to wear a face mask, describing the action as “a way to start pulling the country together.”

“It doesn’t matter who you voted for, where you stood before Election Day. It doesn’t matter your party, your point of view,” Biden said during a news conference Monday in Delaware. “We can save tens of thousands of lives if everyone would just wear a mask for the next few months. Not Democrat or Republican lives, American lives.”

According to tracking data from the National Governors Association, 34 states already require wearing a face covering in public.

Most of those states have recommended that residents wear a mask, but officials declined to require them to do so.

Other states without an overall mandate do require masks in specific limited settings: Arizona requires masks at gyms and for employees at barbershops, and South Carolina requires them in state government offices.

Cities or counties in some states without a mask mandate have enacted their own requirements in the absence of rules from their state governments.

Those local rules have made a difference in some states. Infections, hospitalizations and other key indicators began dropping in Arizona this summer after GOP Gov. Doug Ducey lifted his ban on cities and counties imposing mask mandates, according to the Arizona Mirror.

Biden had pointed to Arizona as a cautionary tale last month, singling out the state’s early-summer spike in cases, among the worst outbreaks in the country.

“Just look at what happened in Arizona. Republican governor initially tried to bar local governments from implementing mask mandates in their communities,” Biden said during an Oct. 23 press conference, according to Arizona television station KTAR. “In June, Arizona got hit with a surge of cases. Hospitals were flooded. The state health system was overwhelmed.”

Ducey responded to Biden’s criticism with a thread of Twitter posts defending his administration’s approach to face masks, arguing that its focus has been on “compliance and public health education.”

“We have promoted mask use and common sense. Masks work,” Ducey tweeted. “Today we see masks worn statewide in nearly every setting as part of reopening guidelines.”

When Florida’s Republican Gov. Ron DeSantis fully reopened the state in September, his order undermined the ability of local governments to enforce their mask ordinances by suspending any fines or penalties assessed for non-compliance, according to the Florida Phoenix.

Iowa Gov. Kim Reynolds has declined to require masks, even as the White House coronavirus task force encouraged her to do so. Reynolds has said she trusts Iowans to act responsibly, and that a mandate would be unenforceable, according to the Iowa Capital Dispatch.

In Missouri, GOP Gov. Mike Parson has resisted calls for a statewide mask mandate, the Missouri Independent has reported. Parson, who tested positive for COVID-19 this fall, has dismissed the notion of requiring masks in certain regions of the state to stem rising case counts, even as the White House task force and state hospital administrators have urged stronger action.

A spokeswoman for Tennessee Gov. Bill Lee, a Republican, told a state television station this week that the governor’s position on a statewide mask mandate will not change under a Biden administration.

“The governor’s position has been pretty clear on statewide mandates, and that position remains the same regardless of who is in the White House,” Lee spokeswoman Gillum Ferguson told WZTV in Nashville.

Absent action from additional states, Biden could make a few limited changes: He has said he would require mask-wearing in all federal buildings and all interstate transportation.

Beyond that, existing federal laws offer few avenues to a national mandate.

The most relevant federal statute appears to be the Public Health Service Act, which authorizes the Centers for Disease Control and Prevention to quarantine people and goods entering the country, according to the Congressional Research Service, but it’s not clear that authority could be extended to a nationwide mandate on face masks.