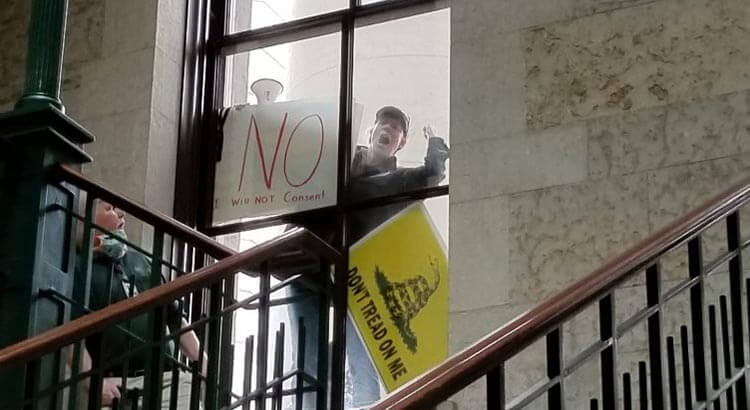 A man protesting Ohio's health orders at the state Capitol on May 1. Capital Journal photo by Marty Schladen
ShareTweet

The number of Ohioans hospitalized with COVID-19 has tripled in the last month.

In the meantime, GOP state lawmakers unleashed a renewed effort Tuesday to torpedo the public health authority of Republican Gov. Mike DeWine and the Ohio Department of Health.

The efforts spanned the Ohio House and Senate, both firmly under Republican control, and ranged from targeting specific orders to neutering current state law that gives the ODH director “ultimate authority” in matters of quarantine and isolation.

That law also allows the department to make orders “for preventing the spread of contagious or infectious disease.”

Regardless, Republicans in the Legislature are teeing up a showdown.

The House State and Local Government Committee began its review Tuesday of Senate Bill 311, which passed the Senate with a veto-proof 20-13 majority and would prohibit ODH from isolating or quarantining anyone not directly exposed to the pandemic.

This would effectively end ODH’s ability to issue stay-at-home orders, which Ohio and most states did in March as the coronavirus emerged as a threat to the public health.

The bill’s two lead sponsors — GOP Sens. Rob McColley of Napoleon and Kristina Roegner of Hudson — downplayed the bill’s weakening of ODH powers. McColley characterized it as a power struggle.

“The governor has taken legislative authority,” McColley said. “That’s not how the government is supposed to work.”

The committee also fielded proponent testimony of House Bill 618, sponsored by Republican Rep. John Becker of Union Twp., which would give the legislature oversight of any ODH order issued to prevent the spread of infectious disease.

A long train of members of two anti-vaccine groups in Ohio spoke in support of both bills.

The committee hearing was held indoors. Chairman Scott Wiggam, R-Wooster, did not wear a mask.

Rep. Brigid Kelly, D-Cincinnati, said HB 618 was a “threat” to Ohioans, already in the midst of the worst case surge of the pandemic.

“This bill will only slow our response, cost more lives and force more businesses into financial ruin,” she said. “We can’t have a health economy without healthy Ohioans to power it.”

A state Senate committee also fielded bipartisan legislation that would overturn an order, passed at DeWine’s behest, that cuts off bar and restaurant liquor service at 10 p.m. and forces them to close at 11 p.m.

Senate Bill 374, sponsored by Senate President Larry Obhof, R-Medina, and Sen. Bob Peterson, R-Washington Court House, would return bar hours to what they were before the COVID-19 state of emergency was declared.

SB 374 is unique among the litany of 2020 bills targeting ODH orders in that it features support from Democratic lawmakers. While most of the co-sponsors are Republicans, four others are Democrats, including Minority Leader Kenny Yuko of Richmond Heights and Assistant Minority Leader Cecil Thomas of Cincinnati.

Another bill related to the pandemic made progress on Tuesday: Senate Bill 375, introduced by state Sens. Frank Hoagland, R-Mingo Junction, and Tim Schaffer, R-Lancaster, which would rescind the state’s order limiting activities at county fairs. The bill was favorably reported out of committee; there are no fairs scheduled until at least the middle of 2021.

Wednesday morning, a Senate committee will take up the House-passed “Truth in COVID-19 Statistics” bill, which forces ODH to produce certain COVID-19 data — most of which ODH has published online since March.