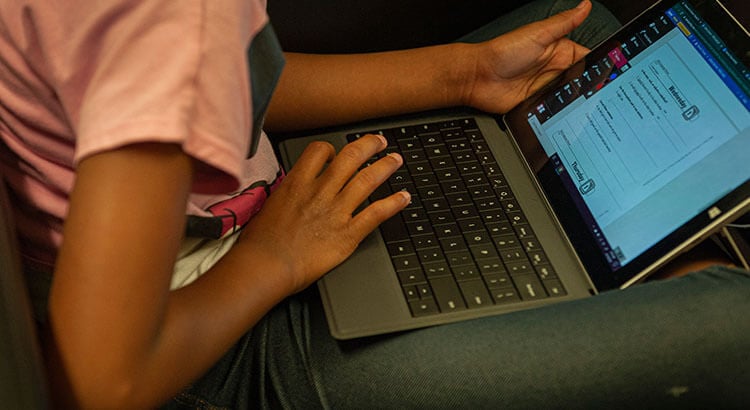 Special education teachers face their own challenges in the time of remote learning, even as hybrid models are beginning at K-12 schools throughout Ohio.

Like other teachers, the immediacy of the school shutdowns in March left Laura Haines and other special education intervention specialists scrambling to come up with a plan.

“We had to go through all their IEPs (individualized education plans) and find work that they could take home and that we could grade,” said Haines, who works for Ashtabula Area City Schools.

Those packets were separate from the other school work the kids had to do along with the other students. Students with IEPs have goals tailored to their learning abilities, and sometimes to address things like behavioral issues.

For some students, Haines said these IEPs can involve in-person monitoring in school, where an intervention specialist can watch a student interact in a class and assess their progress. For others, the goals are tracking progress with speech therapy or learning methods.

The IEPs are valid for one year, before intervention specialists have to create a new plan which either continues the current plan or creates new goals to replace those that have been completed.

When in-person schooling disappeared at the beginning of the COVID-19 pandemic, specialized plans had to be re-tooled even more.

“For the first week-and-a-half, we were just trying to find the parents and see how we could get connected to the kids,” Haines said. “We set (students) up with online learning, and the next challenge was getting them to consistently sign in and have a quiet place to work, things like that.”

Despite the initial scramble, Haines and others remained positive, and said the support from the school districts helped them get through the first few weeks, until they had a plan in place.

“It helped that a lot of parents are really on board,” said Stacy Mate, a speech language pathologist at Grand Valley Local School District.

A typical school year for Mate involves small groups of students working on their goals, including articulation and speech sounds, about 30 minutes weekly, but some kids can be seen daily depending on the IEP. Starting online therapy in March meant adaptation for Mate.

“March was survival mode,” Mate said. “It was like survival education, and with parents trying to find daycare and dealing with their own work schedules, it was survival for them, too.”

Teletherapy was available for some, but Grand Valley includes some rural areas where broadband access is limited, and also an Amish population.

“In that case we would set up a phone conversation,” Mate said.

Both Mate and Haines are happy to be going back to school and say their schools are doing well with safety measures in place. The next challenge they foresee is the learning standards that may have been impacted by the closure of schools and the change in environment for students.

The state requires school districts to collect data on student growth and school success to decide on school funding and state report cards that rank schools. There are also federal requirements for testing, and teacher evaluation are also a part of a normal school year.

Haines said the director of special education in Ashtabula wrote to the state letting them know they wouldn’t have enough data because the intervention specialists aren’t always able to observe behaviors. Where there were connection issues, for whatever reason, Haines said sometimes parents would be asked to send pictures of a student’s work.

“If the parent did not send pictures of the child’s work, we didn’t have any data to show the state,” Haines said.

The testing and data-collection issues have been the subject of hearings in state legislative committees to decide how to continue funding schools and how to gauge the progress of Ohio’s schools and students through the pandemic.

The state is not hopeful that they (or any other state) will receive a waiver from conducting federal testing, but hope to convince education leaders that the tests should only be used as a informal progress report, rather than used as official data.

On the state level, legislators appear willing to reconsider the use of state testing as an real look at the current state of schools, and education officials argue teacher evaluations should also be treated that way in light of the pandemic challenges.

Melissa Cropper, president the Ohio Federation of Teachers, said special education teachers have had to a do job in uneasy and impractical times, and while the ideal situation would be for COVID-19 to be eradicated, a flexibility is needed as they navigate new challenges.

“Many times, these teachers are overburdened and have heavy class loads,” Cropper said. “Part of what we need is a flexibility to try to meet the needs without being overburdened by regulations that might stand in the way of getting done what we need to get done.”