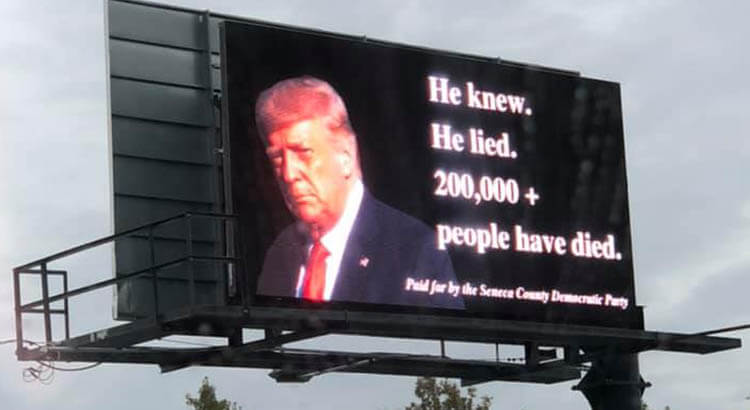 Tiffin, Ohio — The Seneca County Democratic Party is taking aim at President Trump over his handling of the coronavirus pandemic with a new billboard featured prominently at one of Tiffin’s busiest intersections.

“He knew. He lied. 200,000+ people have died,” the billboard, located at the intersection of W. Market St. and S. Sandusky St., states alongside a photo of Trump.

The advertisement is based off of reporting from one of the nation’s most respected journalists, Bob Woodward, who interviewed Trump 18 times from December to July.

In early February, Trump told Woodward he knew how deadly the coronavirus was, and in March, admitted he kept that knowledge hidden from the public.

Woodward quoted Trump telling him that the virus is “deadly stuff” on February 7, before the first U.S. death was confirmed.

“I wanted to always play it down,” Trump told Woodward on March 19. “I still like playing it down, because I don’t want to create a panic.”

Despite his admissions to Woodward, Trump has frequently downplayed the virus in public, at one time insisting that the virus was “going to disappear” and “all work out fine.”

As of Monday, over 224,000 Americans have died with COVID-19. More than 8.3 million have been infected with the novel coronavirus.