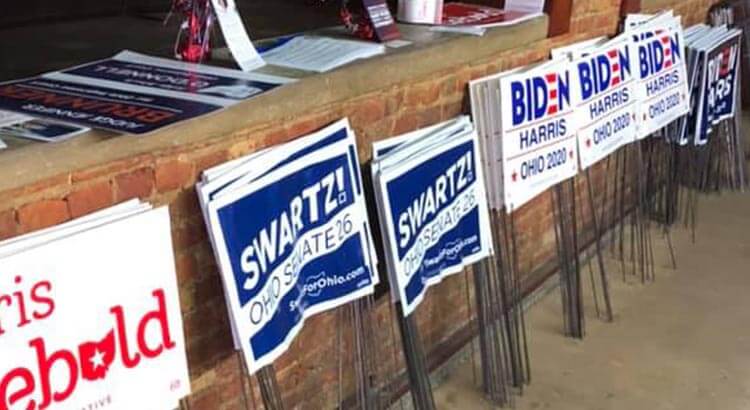 On Wednesday, the Seneca County Democratic Party was contacted by a city utility worker upon their discovery of 19 Biden-Harris signs floating in the river.

The city utility worker returned the signs to the local Democratic headquarters in Downtown Tiffin, and the thefts have been reported to the Tiffin Police Department.

Gina Grandillo, chairwoman of the Seneca County Democratic Party’s executive committee, said the batch of signs found in the Sandusky River is yet another example of the thefts/vandalism targeting campaign signs throughout the county since the party opened its headquarters in August.

“It makes me sad for our county,” Grandillo said. “There used to be a tradition in Seneca County of respecting other people’s political views. Over the last four years, and under certain leadership, that tradition has clearly been desecrated.” 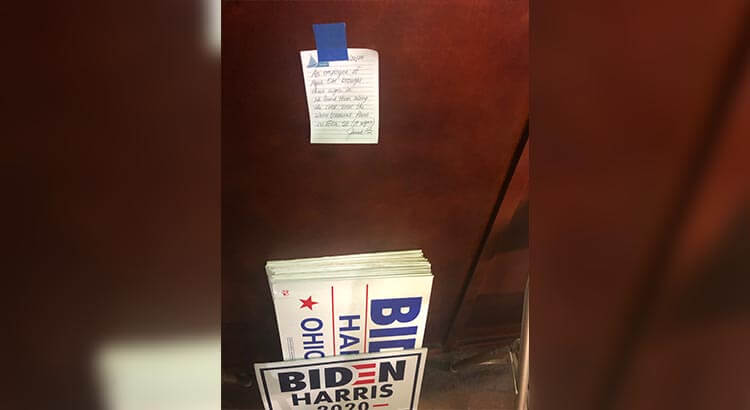 Grandillo said all acts of political yard sign theft are being reported to local law enforcement.

“Our president has run a campaign based largely on inciting hate and violence,” Grandillo said in a press release. “It is foolish to pretend that this would be happening under the leadership of a civilized candidate.”

Asked by TiffinOhio.net about a Facebook cover photo featured on the profile of Vanessa Treft, women’s chair of the Seneca County Republican Party, which showed multiple Biden signs on fire, Grandillo criticized the image and said she believes it sends the wrong message. 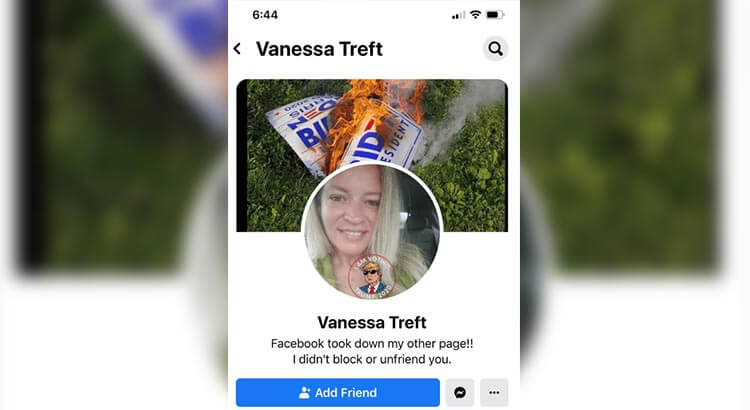 A screenshot from the Facebook profile of Vanessa Treft, women’s chair of the Seneca County Republican Party, showing burning Biden yard signs as her cover photo.

The photo, Grandillo says, serves no purpose “other than to further divide us and incite destructive and hateful behavior.”

However, Treft told TiffinOhio.net Friday afternoon that the Biden signs were placed in her father’s yard last month in an unsolicited fashion. Treft said she would provide this news outlet with a written statement regarding the photo at a later time.

Grandillo called on Seneca County Republican Party leadership to condemn the thefts and vandalism, adding that “we are all fighting for a common goal, and I believe we can power through this election in a respectful manner.”

“Local Republican leadership needs to denounce this activity and come together as a party,” Grandillo said. “Many of our members believe this behavior is directly related to the way the president conducts himself and his fear that he is losing Ohio and the election.”

Grandillo said her party will continue to “take the high road,” adding: “To those Republicans against Trump in Seneca County, our doors are open.” She also encouraged any residents who experience yard sign theft or vandalism to file a report with local authorities.

Chris Widman, chairman of the Seneca County Republican Party, told TiffinOhio.net that he feels “it is very unfortunate that political yard signs are coming up missing and vandalized.”

“It is my understanding that both Republican and Democrat candidates are affected by this,” Widman said.

Tiffin Police Chief and Seneca County Sheriff-elect Fred Stevens on Friday condemned the theft and/or vandalism of yard signs, reminding residents that such acts are against the law.

“I am positive that the vast majority of Tiffin joins me in the welcome of civil discourse on any political or social issues,” Stevens said in a statement provided to TiffinOhio.net. “Suppressing opinions of others is wrong and not acceptable in any form or fashion. I would hope that no one wants to be on the court docket for something so stupid.”

Stevens said Tiffin has had a “pretty good history” of respecting each other’s opinions, and that he feels this is “the work of a few bad apples that do not understand the seriousness of the offense(s) they are committing.”

Stevens said as of Friday, since May 1, the Tiffin Police Department has received eight official reports of political/religious yard signs being stolen. Some residents who called law enforcement to notify them that their signs had been taken did not want to make an official report, according to Stevens.

“I know we are living in politically charged times but stealing signs, because you do not agree with someone politically, is not a way to support your candidate at all and can get you into some serious legal issues,” Stevens said. “Anyone doing this or anyone aware of someone doing this should tell them to cease and desist before they get caught.”

Editor’s Note: This story has been updated to include a statement from Seneca County GOP Chairman Chris Widman as well as information from Seneca County GOP Women’s Chair Vanessa Treft surrounding a Facebook cover photo she used featuring burning Biden signs, indicating they were placed in her father’s yard in an unsolicited fashion.