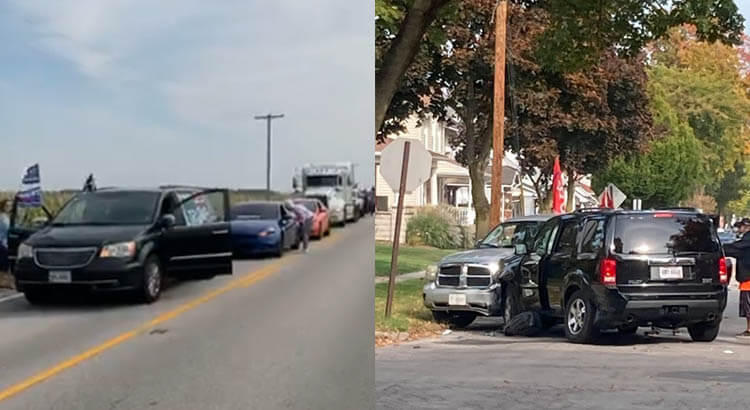 During a pro-Trump parade in Seneca County on Saturday, participants were accused of breaking traffic laws and endangering the public. (Photos: Facebook)
ShareTweet

Tiffin, Ohio — A group of President Donald Trump fanatics gathered Saturday in Tiffin for a pro-Trump parade throughout Seneca County, with some participants allegedly breaking traffic laws and endangering the public in the process.

The parade, which was organized by the Seneca County Republican Party and did not have a police escort like an official parade event, began at the Tiffin Mall parking lot and went down Washington Street in Downtown Tiffin when several Facebook users reported that the parade participants were breaking traffic laws without regard for the safety of others.

“We were on Circular and Melmore at the light and those ‘law and order’ Trumpsters were speeding and running the red lights!,” a Tiffin woman wrote in a public Facebook group.

During the parade, Trump supporters drove around Tiffin and surrounding villages in cars, trucks, and motorcycles, bearing signs, flags, banners, and a life-size cutout of the president.

At Circular St. and S. Washington St., a parade participant appeared to collide with another vehicle — and a photo of the crash was shared to the Seneca County Scanner group on Facebook. 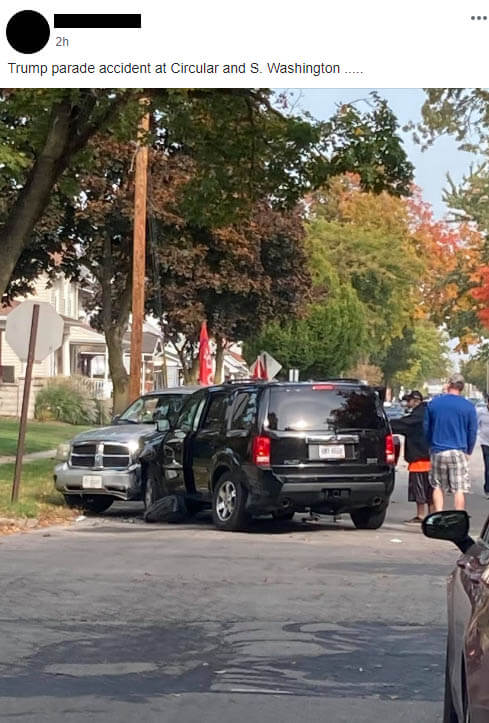 “Just like the Trump presidency! A total wreck!” a Tiffin man commented on the photo.

According to police, an elderly woman driving a Ford Focus struck the black Honda Pilot, which caused it to collide with a Dodge truck that was participating in the event. Witnesses said the erratic driving and disregard for traffic laws displayed by some parade participants led to the accident.

“I was walking down Washington from the Farmers’ Market to my house which is about 4 houses from that accident; the entire parade were running red lights / stop signs, etc.,” another Tiffin woman commented. “I was pushing my [1-year-old] in a stroller and had to dash out of the way when crossing Madison Street so those yahoos didn’t run me over! Not surprised there was an accident.”

According to a Tiffin Police Department dispatcher, an official permit was not issued for the parade. In addition to the accident at Circular and S. Washington Streets, police responded to reports of blocked intersections as a result of the parade.