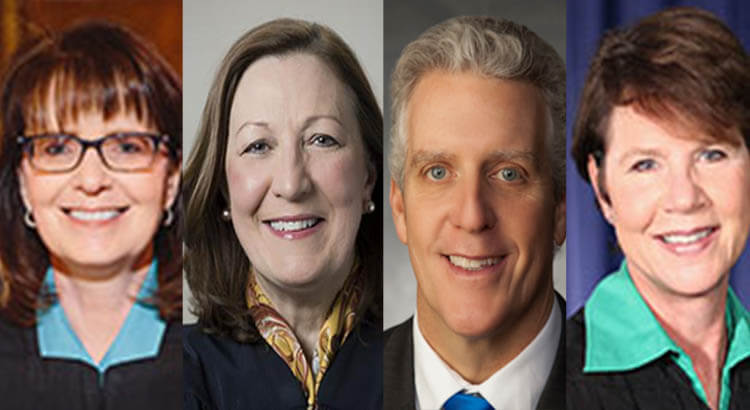 The roles Ohio Supreme Court justices should avoid are just as important as the roles they do play, according to justices and the judges vying for two spots on the state’s highest court.

In a recent forum hosted by the Ohio Debate Commission, Justice Sharon Kennedy, Justice Judith French, and their challengers, Cuyahoga Court of Common Pleas judge John P. O’Donnell and Tenth District Court of Appeals judge Jennifer Brunner, came together to talk about the three branches of government, impartial justice and inequity in the legal system.

The two statewide races — the only statewide races apart from the race for president — could swing the balance of power on the court, which is currently controlled by Republicans 5-2, including incumbents French and Kennedy.

The justices and judges agreed that the Supreme Court should be a branch separate from the other two branches, but especially from the legislative branch.

Kennedy said the role of judges is to serve as “independent bodies” who serve in the Supreme Court to apply the law as written, and only intervene in the General Assembly’s business if the action reaches unconstitutionality.

Unconstitutional laws came up specifically in a question about the state Supreme Court’s 1997 DeRolph decision, in which the court ruled that the state’s public education funding formula was not lawful.

“The DeRolph decision that declared school funding unconstitutional is a thorn in Ohio’s side,” Kennedy said.

But it is still up to the legislature to fix the problems, she said.

That case was decided decades ago, and public education funding has been ruled unconstitutional three other times since. Just recently, a bipartisan bill to address some issues first raised in DeRolph was brought back up by one of its cosponsors.

O’Donnell argued that the case “is not going to be revived,” and another argument about the constitutionality of public school funding would have to come from a new court case.

The judges and justices also agreed that a statewide sentencing database would bring a better sense of accountability and transparency to the justice system. French brought up work being done by the Ohio Criminal Sentencing Commission several times, particularly in talking about racial inequities and inequities in the state’s bail bond system.

Brunner likened a sentencing database to a system created under her tenure as Ohio’s Secretary of State, which tracked the quality of life for Ohioans.

The judges broke away from the justices on the subject of a “clean campaign agreement” the Ohio State Bar Association’s Campaign Advertising Monitoring Committee put together as a pledge from the candidates that they would be “personally responsible” for the content of “all statements and campaign materials” relating to their judicial campaigns.

That pledge also charged the OSBA committee with “reviewing judicial advertising” and charged the candidates to “publicly disavow advertisements that impugn the integrity of the judicial system,” the other candidates or that “erode public trust” in the judiciary.

O’Donnell and Brunner both declined to sign the pledge, saying their judicial ethics were a part of their campaign, as well as their independence as candidates and legal professionals.

“I’m a judge, and I’m running to be a justice of the Ohio Supreme Court,” O’Donnell said. “To do so, I have to be confident in my judgment, so I will exercise my own judgment and denounce, if I see fit, some third-party advertising that might hypothetically appear.”

On the topic of money in Supreme Court races, which are not considered partisan races in the state, the judges and justices said money was a “necessary evil” in any campaign for elected office.

“As long as we are going to have judicial elections, we are going to be raising money to actually put forth our candidacy and our First Amendment voice in explaining to the voters why you are the better candidate,” Kennedy said.

French also approved of an example given by moderators in which the Ohio Business Roundtable — a group of Ohio CEOs led by former Republican legislator Pat Tiberi — pushed CEOs to send out emails encouraging employees to tie job stability to the layout of the Ohio Supreme Court.

“Ohio Business Roundtable and the CEOS that are encouraging their employees to vote for me, I applaud that effort,” French said. “I believe that is a correct statement that having me remain on the Ohio Supreme Court is better for the stability of the court.”

As the justice system continues to adapt to social distanced court proceedings and online hearings, the judges and justices said the COVID-19 pandemic has brought out creativity and innovation in the judiciary, something that will be necessary as the pandemic continues, and as more permanent accessibility to the justice system is demanded.