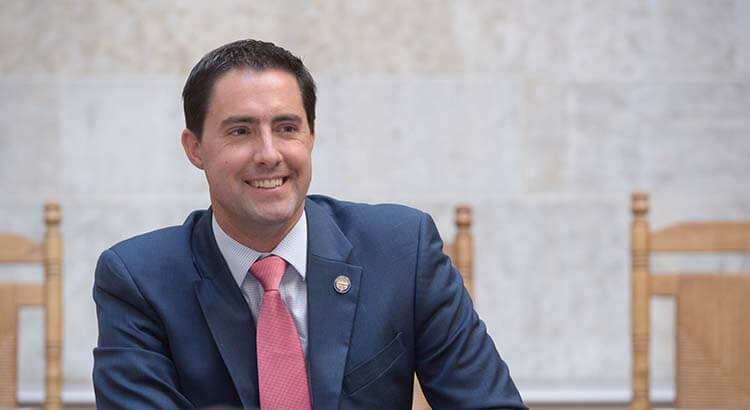 Voters advocates have wanted more ballot drop boxes to be installed throughout Ohio to allow for more convenient absentee voting during the pandemic.

Ohio Secretary of State Frank LaRose has issued a new directive allowing county boards of elections to install extra drop boxes for voters — but only at the elections offices. He has also authorized elections officials to set up an additional drop-off site “outside of the office” to collect ballots from voters.

LaRose has faced lawsuits this fall from voting advocacy groups and the Ohio Democratic Party seeking to allow for additional boxes to be installed throughout a county, not just at the elections offices.

In a statement announcing his newest directive, LaRose said: “Despite predictable partisan politics that attempt to create phony crises, we have kept our eye on the ball and Ohio’s election officials are ready to administer a safe, secure, and accurate election.“

Democrats and other advocates have decried the latest directive.

“Frank LaRose pledged publicly that he would allow expanded dropbox locations if he were allowed under Ohio law,” said David Pepper, chairman of the Ohio Democratic Party, in a statement. “We proved our case, and he lost, showing that dropboxes are permitted in multiple locations in Ohio counties. Now he’s going back on his word with a transparent, cynical ploy.”

State Rep. Bride Rose Sweeney, D-Cleveland accused LaRose of “performing for his national GOP bosses and not with Ohioans’ best interests in mind.” U.S. Sen. Sherrod Brown said LaRose’s directive was “disingenuous” and said it “does absolutely nothing to make it easier for Ohioans to drop off their ballots in each county.”

Ohio law does not limit the number or location of ballot drop boxes.

Accessibility to democracy is a central concern and this directive does nothing to address that.

Early voting begins in Ohio on Tuesday, with absentee ballots being mailed out that day to those who requested them.

Monday’s directive mirrors authorization already given to at least one county in Ohio.

The Athens County Board of Elections office in southeast Ohio has, in recent weeks, installed two drop boxes: one for the front entrance and another for the back entrance.

LaRose is not requiring that boards install extra boxes around its office — only that boards can vote to do so. The boxes must be secure and available to voters for 24/7 access.

Ohioans can drop off both absentee ballot requests and their ballots themselves to these boxes. Boards of elections follow rigid guidelines requiring that both a Democratic and Republican election official be present when the box’s contents are retrieved. The boxes are emptied once per day.

Drop box access is available through 7:30 p.m. on election night.

Boards of elections are not required to provide this option for voters, but can choose to do so.

The sites must have at least one Democratic and one Republican board employee collect ballots together; they must be wearing personal protective equipment; and they must use a secure container to place the ballots in. The board can decide its own schedule for providing this service.

One goal of this is to mitigate any traffic congestion near the county’s drop box.

LaRose has faced two lawsuits in response to his August directive that county boards of elections only install a drop box at their offices.

In public statements and court filings, LaRose has offered support for allowing drop boxes to be installed elsewhere — but believes his hands are tied and state law does not allow him to authorize that.

Courts have ruled otherwise. A panel of judges on the 10th District Court of Appeals upheld a lower court ruling that the number of drop boxes and their respective location is LaRose’s call.

“[The law] does not limit the number or locations of drop boxes that a board of elections may provide,” Judge Betsy Luper Schuster wrote in a majority opinion.

“We further agree with [the Ohio Democratic Party] and the trial court that [the law] does not limit the Secretary of State from instructing boards of elections that they may have multiple drop boxes at alternate locations in their respective counties.”

However, the court handed LaRose a victory in striking down the lower court’s preliminary injunction against his directive limiting the ballot boxes.

A separate lawsuit continues in federal court. While Judge Dan Polster said Sept. 25 he would see what happens in the state courts before ruling, he admonished LaRose late last month for dithering on the issue.

“If [LaRose] felt he needed clarification on the legality of adding more drop box locations from the Attorney General, it was his prerogative to seek it, but all that could have been done well before the election,” Polster wrote. “August 12 was far too late to issue Directive 2020-16.”