DeWine has faced an onslaught of criticism and legislative rebuke from the Ohio Statehouse related to his year-long response to the coronavirus pandemic. Much of the backlash has come from members of his own party.

A growing number of bills, all of them Republican-led, have sought to curb the power of the executive branch in responding to such a crisis. Four Republican members have called for the governor’s impeachment and one of them wants DeWine to face criminal charges.

But DeWine remains popular among the general public, which has given the governor favorable marks throughout 2020 for his handling of the pandemic.

The Ohio Republican Party has purchased Facebook advertisements this month highlighting DeWine’s endorsement in seven legislative contests, most of them in suburban areas.

The candidates range from first-time challengers to experienced incumbents. Facebook data shows the ads are primarily being seen by women and younger voters. 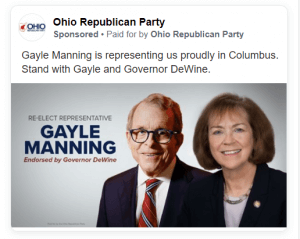 Here is one of the Ohio Republican Party advertisements on Facebook highlighting a legislative endorsement from Gov. Mike DeWine. (Screenshot from the Facebook Ad Library)

Five are incumbents in the Ohio House of Representatives running for re-election:

Two other ads are for Republican challengers:

The social media platform provides ranges, not exact figures, for spending and ad views. But it does give more in-depth figures for the demographics of those viewing them. A total of 56% of those viewing the ads were women, the data shows. Among all users seeing them, 58% were between the ages of 18-44.

A Baldwin Wallace University Great Lakes Poll from September found that most Ohioans still somewhat or strongly approved of DeWine’s handling of the virus. He polled essentially the same between male and female respondents, with no breakdown by age.

A Quinnipiac University poll from June asked a more general question of whether respondents approved or disapproved of DeWine’s overall job as governor. He polled well among all demographics, though this survey found that older Ohioans viewed DeWine more favorably than younger residents.

The Ohio GOP does not appear to be running any Facebook advertisements with DeWine endorsements for rural districts. Many of the biggest coronavirus critics in the legislature represent rural areas and have argued the statewide mandates have disproportionately impacted their areas with less cases and deaths than in other population centers. DeWine’s administration has pointed out that the occurrence rate of COVID-19 remains high in rural areas as well.

It is unclear how many total candidates for the state legislature have been endorsed by DeWine. The Ohio Capital Journal requested a list from an Ohio Republican Party spokesperson and will update this story if it is received.

The Ohio GOP is highlighting other endorsements in its Facebook ads for rural district candidates. One ad for candidate Ron Ferguson, who is running for the 96th District in eastern Appalachian Ohio, highlights an endorsement by Congressman Bill Johnson, R-Marietta. Various other ads note endorsements from groups such as Ohio Right to Life and the Affiliated Construction Trades of Ohio.

All of the incumbents endorsed by DeWine have voted in favor of at least some legislation meant to target his administration and the Ohio Department of Health.

House Bill 624, known as the “Truth in COVID-19 Statistics” bill, was led by Rep. Diane Grendell, R-Chesterland, who alleged the state had provided “one-sided and woefully incomplete” data in order to promote “fear and despair.” HB 624 seeks to force the state to provide certain pieces of data to the public — much of which it already reports — and it passed the Ohio House with unanimous support from Republicans.

Some of the endorsed candidates have even co-sponsored these pieces of legislation. Brinkman co-sponsored House Bill 618 in May seeking to reopen Ohio’s economy and alter the Ohio Revised Code to take away the Ohio Department of Health’s authority to issue sweeping health orders amid an infectious pandemic. The bill sponsor had specifically asked for legislators’ support to strip the DeWine administration “of the power they’ve abused.” Brinkman also co-sponsored House Bill 649, which would require legislative oversight to certain health orders issued by the state.

Brinkman was among 19 Republicans in the Ohio House of Representatives to sign a June 3 letter urging the governor to reverse course and reopen the state.

“Ohio smashed the curve long ago,” Brinkman and the other lawmakers claimed. “Mission accomplished!”

Two of the other endorsed candidates did at one point stray from their colleagues and side with DeWine on a virus-related bill. Reps. Manning and Greenspan voted against Senate Bill 1, which also sought to mandate legislative oversight to certain health orders.