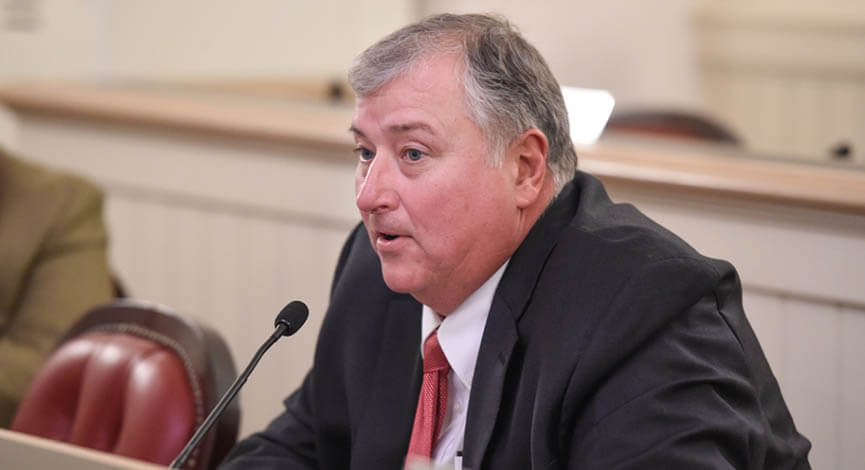 Larry Householder has gone from the Speaker of the Ohio House of Representatives to the pariah of Ohio politics.

The Republican’s name has appeared in advertisements from both political parties this election season, as the two sides have attempted to pin alleged corruption at the Ohio Statehouse on each other.

Democrats have accused various Republican candidates of being complicit in this corruption, despite some having dubious or little connection to the House Bill 6 scandal which centered on a controversial nuclear bailout package.

Republicans have thrown accusations in the other direction, and have championed one GOP candidate for voting against the nuclear bailout which “eroded Ohioans’ trust” — not mentioning the bill was led and supported by many other Republican legislators.

Standing up to corruption has emerged as a leading theme in this year’s election cycle, as Householder and four other political operatives are facing trial for an alleged $61 million racketeering scheme. 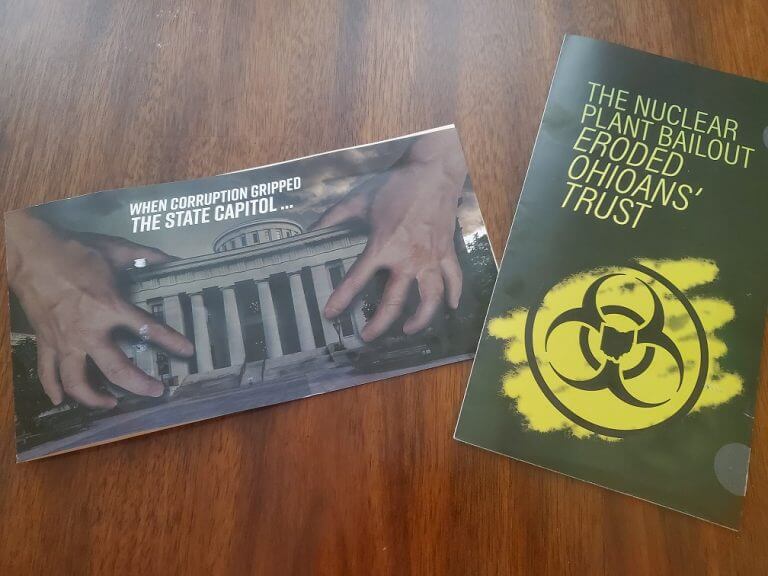 The Democratic and Republican Parties have both sent out mailers and booked digital ads railing against corruption at the Ohio Statehouse. Photo by Tyler Buchanan / Ohio Capital Journal.

This emphasis on anti-corruption is no surprise to Micah Derry, the state director for Americans for Prosperity’s Ohio chapter, which has been steadfast in its opposition to HB 6. Voters’ disgust with political corruption in the wake of Householder’s July arrest has been evident in door-to-door campaigning, Derry said.

“I have never seen so much awareness about a state political issue before,” he said. “And I’ve never seen people respond to campaign messaging around it the same way. There’s a reason why the parties are all trying to capitalize on it.”

Still, Derry added, “no one’s blameless in this. Everyone’s hands are dirty in this whole process.”

AFP of Ohio has endorsed candidates in nine races, including four Republican incumbents who voted against HB 6 last year.

“It takes courage to stand strong against corruption,” reads one mailer from the organization supporting state Rep. Laura Lanese of Grove City.

The Ohio Republican Party offered a similar message to voters in Lanese’s district. One such mailer shows two large hands superimposed to be gripping the Statehouse building.

“Laura Lanese stood up to the good ole boy network and opposed Larry Householder’s bid for Speaker of the House,” the mailer continues. “Now, Householder has been arrested and is facing criminal charges for bribery surrounding HB6 legislation.”

The ad doesn’t mention that Householder is a Republican; that the bill was introduced by a pair of Republicans; and that one of the operatives arrested alongside Householder was Matt Borges, a former chairman of the Ohio Republican Party.

Meanwhile, an ad from the Ohio House Democratic Caucus accuses Lanese of being “Larry’s Lackey” for having been on Householder’s leadership team — but it does not mention Lanese voted against the bailout bill. A separate digital ad implies a financial connection between Lanese and those involved in the scandal, though campaign finance records show she is not one of the Republicans who received donations from Householder or his associates.

There are a number of other questionable ads from both parties’ campaign teams this cycle:

The state political scandal has even been used as an attack ad for a federal race. An ad from Republican Congressman Mike Turner of Dayton tried to tie Democratic candidate Desiree Tims to the corruption scheme, Cleveland.com reported, despite her having no connection to Householder, HB 6 or FirstEnergy.

The Ohio Capital Journal sent requests for comments about these ads to spokespeople for both parties.

In a statement, Ohio House Democratic Caucus Executive Director Aryeh Alex defended the ads by pointing to the candidates’ overall voting records and noting they have received donations from Republican campaign committees which previously received funding from Householder.

Rachel Coyle, the campaign director for the Ohio Senate Democratic Caucus, did not answer questions about the caucus’ ads, instead passing them along to those with the individual Democratic campaigns for the districts in question. A campaign manager for Crystal Lett, the Democratic challenger to Kunze, defended the ads and pointed to donations received by FirstEnergy.

The Ohio Capital Journal has identified donations from the FirstEnergy PAC to legislators from both parties. Asked if this made Democratic recipients complicit as well, the campaign manager said it didn’t and noted Householder’s status as a Republican legislative leader.

Evan Machan, a spokesperson for the Ohio Republican Party, did not respond to the Capital Journal’s inquiry.

Derry, with Americans for Prosperity’s Ohio chapter, said the two parties “are doing everything they can bending over backwards to point fingers at each other.”

Derry said his conservative organization’s aversion to HB 6 stems from broader opposition to government subsidies, tax credits and corporate bailouts — all of which he said have been “sacred cows” within the Statehouse. Along with endorsing four incumbents who voted against the bill, the group has endorsed five other challengers who Derry said have supported a change to how the legislature approaches these “root issues.”

This year’s scandal, he added, is simply the “biggest and flashiest example” pointing to a Statehouse in need of change.