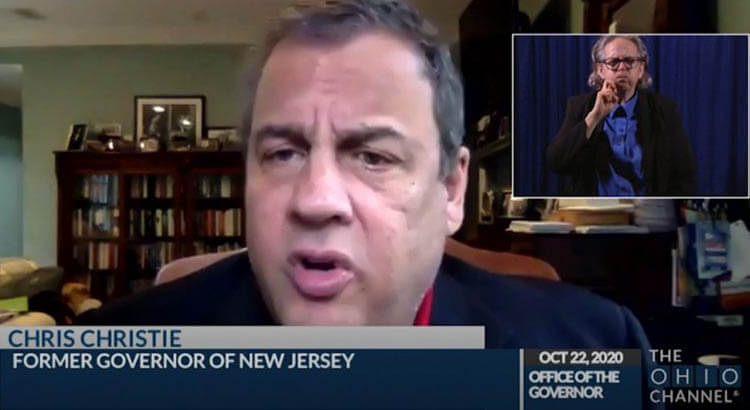 Just hours before, Christie was warning Ohioans to do things to protect themselves from coronavirus — the kinds of things that Trump has mocked. It’s a disease that terrified and almost killed Christie and he said he got it at the Trump White House.

During the debate, as he has throughout the year, Trump minimized the pandemic, which is spiking badly in Ohio and elsewhere and has already killed more than 225,000 Americans.

During a campaign stop in Circleville on Saturday, Trump implied that the a disease that put him in the hospital was largely a media creation that would cease to be reported once the election was over.

“You know what? On November 4th, you’re not gonna hear — the news, CNN, all they talk about, ‘Covid Covid Covid.’ If a plane goes down with 500 people, they don’t talk about… they’re trying to scare everybody. You have to lead your life, and you have to get out,” Vox Associate Editor Aaron Rupar tweeted, along with a video clip of the statement.

Trump: “You know what? On November 4th, you’re not gonna hear– the news, CNN, all they talk about, ‘Covid Covid Covid.’ If a plane goes down with 500 people, they don’t talk about … they’re trying to scare everybody. You have to lead your life, and you have to get out.” pic.twitter.com/SL5ndWz7Bu

Those are the kinds of comments Christie seemed to be battling against as he spoke to Ohioans on Thursday afternoon. Ohio Gov. Mike DeWine — also a Trump supporter — invited Christie to speak at a Zoom press conference in which DeWine gave an update on the coronavirus crisis in the state.

Christie described the terror of being largely isolated for more than six days — a period during which doctors couldn’t assure him that he’d live. the former New Jersey governor also seemed to say that White House laxness toward the virus was to blame for his near-death experience.

An extended excerpt of Christie’s statement to Ohioans:

“I thought I was safe and I was wrong. I got tested every day when I walked into the grounds of the White House for the four days when I was doing debate prep with President Trump. I was assured sitting in the third row of the (Supreme Court nominee) Amy Coney Barrett ceremony… that everyone in the first three rows had been tested that day and tested negative.

“As soon as I left to walk back to my hotel I put my mask back on. I kept it on when I was in the hotel lobby, walking down the streets. I only took it off once I got back in my room by myself. I did that for four days out of seven months that we’ve gone through this pandemic.

“Three days later, I began to feel what I call the freight train of symptoms that happen with covid-19: fever, headaches, incredible body aches, chills, sweats and it overcame me in a period of 24 hours — to where I got from feeling fine and doing my work on Friday afternoon to by Saturday at one o’clock being admitted to the hospital and being taken immediately to the intensive care unit, where I stayed  for the next six-and-a-half days.

“And during that period of time I will tell you, it is a frightening experience. I want everybody out there who’s listening to understand: This is one of the most unpredictable, random and brutal viruses you’ll ever see. And every day my doctors would come in and tell me, well, things are looking a little bit better or a little bit worse, but we can’t guarantee that within an hour it won’t turn significantly worse. And with my history as an asthmatic since I was 13 years old they were very concerned about how this would go for me.

“So my message to the people of Ohio and to the people of this country… is that there’s no place to hide from this virus if you’re not going to take these common-sense steps that (the U.S. Centers for Disease Control) and the (National Institutes of Health) have recommended for us: Wear a mask, when you’re outside remain socially distant from people — no big crowds — and wash your hands frequently.

“I came out of this OK. I still feel some of the symptoms — fatigue most particularly — and my doctors say that could last for quite some time. But I survived, I’m alive and it very well could have gone the other way and for 220,000 other Americans it has. So I just want to urge as many people as I can: Don’t let your guard down.

“It’s not worth it. I went through it. I made a huge mistake by taking that mask off and I hope it’s something no other Americans have to go through.”

Strong words. But only eight hours later, in front of a huge national TV audience, Christie praised a debate performance in which Trump again played down the pandemic and made numerous false statements about it.

In that forum, the former New Jersey governor didn’t mention the pandemic. Nor did he mention that Trump has been holding campaign events in front of big crowds that earlier in the day Christie had told Ohioans to avoid.

“I think he ran a debate that was very strong,” Christie said of Trump. “His demeanor was good. I think he was talking to the American people and I think that the other thing that I knew he needed to do tonight which I think he did was to show the contrast of the policies of his administration and what would be a Biden administration.

“So for people out there who were listening who wanted to know what the choice is, I think they got a much better opportunity to hear that choice tonight. I think it was a good night for the president.”