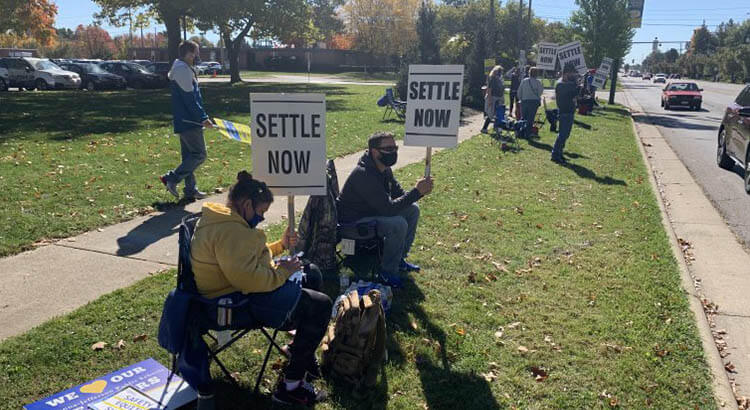 Members of the Gahanna-Jefferson Education Association form a socially distanced picket line outside a high school on the first day of their work stoppage. Photo by Jake Zuckerman / Ohio Capital Journal.
ShareTweet

Gahanna, Ohio — A Franklin County teachers union voted to strike Tuesday in protest of the Gahanna-Jefferson Public School District’s hybrid learning model, created as a response to the COVID-19 pandemic.

At Gahanna-Lincoln High School, members of the Gahanna-Jefferson Education Association formed a picket line along Hamilton Road, waving signs calling for “safety” and “equity” for students. About 572 teachers are in the GJEA, per a union spokeswoman.

In interviews, teachers said the district’s current hybrid education plan puts them in a pinch; They have to teach classes to the “blue” students who take in-person classes Wednesday and Friday, the “gold” students” who take classes Tuesday and Thursday, and online-only students as well.

Teachers said the online-only learning is essentially just a camera in the back of the hybrid classrooms livestreaming the lessons. Along with leading the in-person class, teachers are expected to work with the online-only students through webcams and a chatroom.

The final product is a vexing Venn diagram charting which students have covered what part of the lesson plan and in what (online or in-person) capacity.

“Kids are going to get ignored, they’re going to fall behind,” said Jennifer McConaha, an English teacher. “It’s sad.”

Teachers, many sporting blue GJEA masks to block the spread of the coronavirus, described scenarios in which they had to deal with nudity, vaping, profanity and other issues during online-only classes, and questioned how they could deal with those situations while simultaneously running an in-person classroom.

The school year began online-only Aug. 24. Tuesday would have been the first day of the hybrid learning model.

The Gahanna-Jefferson Public Schools Board of Education did not respond to specific questions but said in a lengthy statement it is sad to see teachers “abandon our students” amid a public health crisis.

“We believe, in the context of a pandemic, live streaming is the best way to ensure that all students have access to the full curriculum offered by the district,” the board said. “This scenario provides equity and a quality education for all students. This is important for students at home in the distance learning model, students with disabilities, and students who are quarantined due to illness or exposure to COVID-19.”

Teachers said they were instructed to prepare three weeks of remote lesson plans for students. The district is hiring substitute teachers to take over classes starting Oct. 19 until the work stoppage ends.

Betsy Baker, a high school math teacher and union spokeswoman, said negotiations are ongoing and fluid. One solution she offered: break online-only classes off from hybrid classes to ensure remote students can still get the full attention of their teachers.

“We don’t want someone that’s at home, especially if they’re a distance learner, to feel like they’re just a camera in the back of the room,” she said. “They’re not an afterthought. They deserve the same access to a teacher, the same access to their peers that a student that was in class would feel.”

Federal and state governments have generally left decisions on in-person, remote, or hybrid education plans to localities, creating a patchwork of responses.

Administrators, parents, and political leaders have wrestled with how to control a pandemic and keep children safe with the collateral damage of remote learning and its shortfalls compared to schooling in normal times.

Serious complications of COVID-19 in children are exceedingly rare but have been documented. Children can also act as vectors for the disease to more vulnerable victims.

All told, 1,184 students have contracted COVID-19 since the school year began, according to the newest data from the Ohio Department of Health released Thursday. At least 686 teachers have contracted the virus in the same time frame.

In Dayton, another school workers union is clashing with its school board.

The State Employment Relations Board announced an emergency hearing scheduled for Thursday between the Fairborn City School District Board of Education and Dayton Public Service Union Local 101.

WRGT reports the school district alleged the union ordered a “sick out” in which 22 bus drivers called in sick to protest the school’s in-person learning plans for COVID-19, violating a collective bargaining agreement that prohibits work stoppages.