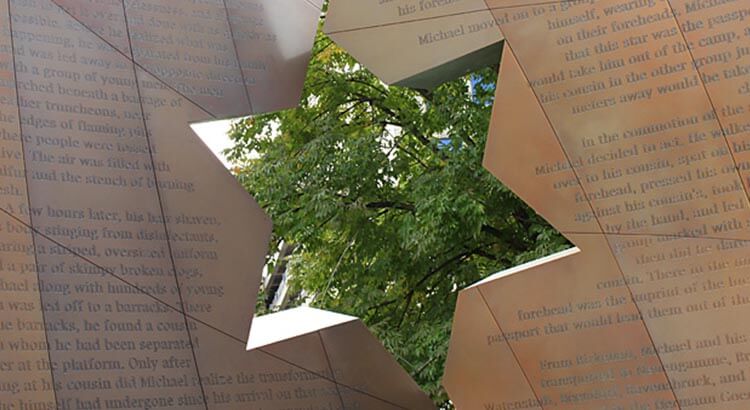 The Ohio Holocaust and Liberators Monument is seen on the Statehouse grounds. Photo courtesy the official Statehouse website.
ShareTweet

Yet a striking number have little to no knowledge about the Holocaust. That is a problem Ohio legislators hope to resolve through a proposed commission to better educate people about the atrocities of genocides.

Around 1-in-8 Millennials and members of Generation Z have never heard of the Holocaust. Of those that have heard of it, 1-in-4 either think the Holocaust is a myth or that the number of Jews that were killed has been greatly exaggerated.

Those are the results of a nationwide survey on Holocaust knowledge and awareness conducted earlier this year. A research firm interviewed hundreds of people between the ages of 18 to 39 from each state and found that Ohio fared worse than average among all 50 states.

Ohio Sen. Michael Rulli, R-Salem, has introduced Senate Bill 372 which would create the Holocaust and Genocide Memorial and Education Commission.

The proposed 15-member group would be comprised of legislators, state officials, educators and researchers with the goal of improving widespread understanding about genocide.

Assisting the commission would be a new Holocaust and Genocide Memorial and Education office, with $275,000 in funding to pay for a director and other expenses. The office would, among other things, work to secure grant and gift funding to further these education efforts around the state.

Those involved would study the existing memorials, programs and initiatives in Ohio and look to fill a gap in the public’s understanding. The bill envisions a partnership between the commission and various other organizations throughout the state. These include the Nancy and David Wolf Holocaust and Humanity Center in Cincinnati, the National Veterans Memorial and Museum in Columbus, the Maltz Museum of Jewish Heritage in Beachwood and the National Museum of the U.S. Air Force in Dayton.

“Given the heightened tensions in our nation, I believe now more than ever we need to help educate the next generations about how horrors like the Holocaust can be perpetrated by even the most civilized and sophisticated people,” Rulli said. “We know that simply pledging to never forget is not enough as sadly, genocide continues to this day. My hope is that Ohio’s youth will become enlightened as a result of this legislation to avoid such atrocities from ever happening again.”

Several Jewish leaders in Ohio have complimented the effort, including Howie Beigelman, executive director of Ohio Jewish Communities, who described a “glaring” lack of knowledge about the Holocaust among the general public.

Nearly two-thirds of the young Americans surveyed believe there is anti-Semitism within the United States in present times. That is born out by another survey question, which found that 15% of Millennials and members of Generation Z think it is “acceptable for an individual to hold neo-Nazi views.”

Back in April, several people appeared at a Columbus protest of COVID-19 lockdowns with various anti-Semitic signs.

One of the cosponsors of Rulli’s bill is Sen. Andrew Brenner, R-Powell, who was widely condemned in April for a Facebook post viewed as anti-Semitic. In that post, made on Holocaust Remembrance Day, Brenner said he would not let the Jewish state health director Dr. Amy Acton turn Ohio into Nazi Germany.

Brenner received widespread criticism from Senate President Larry Obhof, R-Medina, Gov. Mike DeWine and a number of other officials. He later apologized and now is offering his support for creating this genocide education commission.

Another Republican legislator, Rep. Nino Vitale of Urbana, was similarly condemned by the Anti-Defamation League for having repeatedly referred to Acton as a “globalist health director,” using a word often used by anti-Semites as a slur against Jews.

Beigelman told the Ohio Capital Journal in the spring that his Ohio Jewish Communities organization has developed a protocol for handling anti-Semitic comments from public officials due to their frequency. He’s now glad to see this effort from the legislature.

“This bill, led by Senator Rulli and so many bipartisan co-sponsors, will help leverage Ohio’s schools, teachers, and community resources to teach this critical history,” Beigelman said in a statement.

An Ohio Holocaust And Liberators Memorial was unveiled at the Statehouse grounds in 2014.