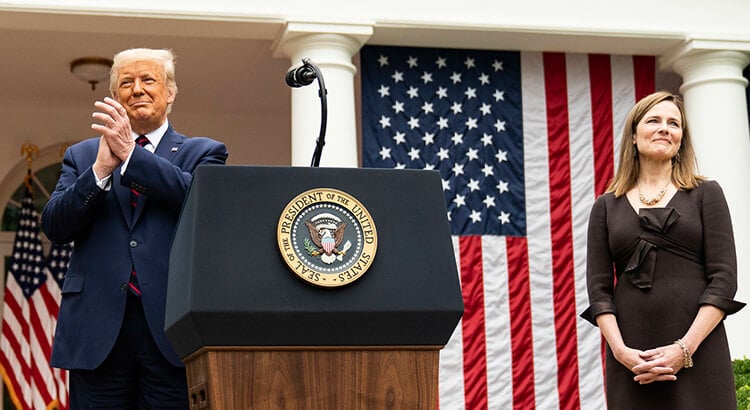 Washington, D.C. — Republicans on the U.S. Senate Judiciary Committee on Thursday approved the nomination of Judge Amy Coney Barrett to the Supreme Court, as Democrats boycotted the markup in a show of protest.

The 12 Republicans on the panel speedily voted on Barrett’s nomination and sent it to the Senate floor. The full Senate will vote Monday, and Barrett is expected to be confirmed, with only a simple majority vote needed. “I doubt a single Dem will vote for her,” Senate Judiciary Chairman Lindsey Graham (R-S.C.) said.

While Democrats boycotted the markup, placed in the seats of their empty chairs were large pictures of people with pre-existing health conditions who would be harmed if the Affordable Care Act were repealed. Democrats throughout the confirmation process have stressed how devastating it would be to overturn the ACA in the middle of a pandemic that has killed more than 220,000 Americans since early this year.

The Supreme Court is hearing a Republican challenge to the law next month, and President Donald Trump has tweeted and publicly stated that all his nominees to the Supreme Court will vote to repeal the landmark Obama-era health care law.

Barrett, 48, a judge for the 7th Circuit Court of Appeals in Illinois, was tapped to replace the late Justice Ruth Bader Ginsburg, who died Sept. 18. Barrett’s nomination has spurred an outcry from Democrats, who argue that she should not be confirmed with only 11 days till the presidential election.

Advocates fear her religious views and track record on abortion rights and LGBT rights, as well as her previous writings on health care, will harm Americans.

“This is the most openly pro-life candidate for the Supreme Court in my lifetime,” he said, according to a pool report.  “And once again, their attempts to attack her for her pro-life views which are well established in the record, just to fall flat. Polls clearly reflect the American people want her confirmed. She will be confirmed on Monday.”

If approved, Barrett’s confirmation will significantly shift the court to the right for generations, giving conservatives six of the nine seats.

Sen. Chuck Grassley (R-Iowa), a senior member of Judiciary, also defended Barrett, saying that she would stick to the law.

“Throughout the hearing, Democrats spun a bunch of nonsense about Judge Barrett and the Affordable Care Act,” Grassley said. “We all know that that’s bunk from how she’s described her approach to that ACA. Judge Barrett made clear then that she doesn’t have an agenda.”

Barrett worked as a law professor at Notre Dame Law School for many years and previously clerked under the late Justice Antonin Scalia, who was her mentor.

Graham said that her nomination would be iconic for conservative women, just like Ginsburg’s, who was seen as a feminist hero and left a legacy of women’s rights.

“It’s historic for young conservative women knowing that there’s a seat at the table for them,” he said.

Outside on the Capitol steps, Senate Democrats voiced their opposition to Barrett during a news conference. As they spoke, a handful of protesters dressed as handmaids who also oppose Barrett’s confirmation could be heard shouting.

Senate Minority Leader Chuck Schumer (D-N.Y.) criticized what he described as “the most rushed, the most partisan, and least legitimate process” of a Supreme Court nomination.

“Democrats will not lend one single ounce of legitimacy to this awful, awful hearing,” Schumer said. “We are voting with our feet.”

After removing a face mask emblazoned with the image of Ginsburg’s dissent collar, Minnesota Sen. Amy Klobuchar said the Senate should be honoring the late justice’s final wish and allowing the next president to select her replacement.

Senate Republicans “have engaged in a sham, in violating their own precedent, in not listening to the words of the great Justice Ginsburg,” Klobuchar said.

Among other GOP senators on the Judiciary Committee: