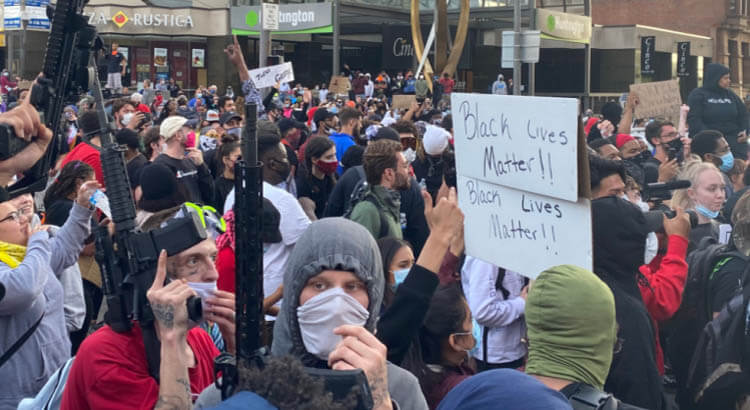 Armed men of unknown affiliation attending a Black Lives Matter protest outside the Ohio Statehouse on May 31. Photo provided by DJ Byrnes.
ShareTweet

On Aug. 11, 2017, James Fields Jr. drove alone, overnight from his home in Maumee, Ohio to Charlottesville, Virginia to participate in an alt-right rally where men marched and chanted that “Jews will not replace us.”

The avowed neo-Nazi drove his car into a 32-year-old woman who came to counter-protest, killing her and injuring at least 30 others. Before the event, federal prosecutors say Fields’ mother texted him, urging him to be careful. He responded with a message paired with a picture of Adolf Hitler.

“We’re not the ones who need to be careful,” he said to his mother, court documents state.

The killing is one of several acts of extreme, political violence with ties to Ohio.

The Williamsburg Police Department recently referred a case to the FBI of a man in a video on social media warning of a “war coming” on Election Day. Federal prosecutors last week alleged the men who plotted a kidnapping of Michigan Gov. Gretchen Whitmer began working on the plan in Dublin.

With an election nearing, the U.S. Department of Homeland Security found “domestic violent extremists” to be the most likely terror threat in the U.S, especially white supremacist extremists.

“Open-air, publicly accessible parts of physical election infrastructure, such as campaign-associated mass gatherings, polling places, and voter registration events, would be the most likely flashpoints for potential violence,” states a DHS Homeland Threat Assessment from October.

A pandemic, the social isolation it forces, and the economic stress in its wake, only further destabilize the political arena and can accelerate people’s radicalization, the report states.

President Donald Trump has declined to commit to a peaceful transfer of power and has called on his supporters to “go into the polls and watch very carefully” for voter fraud, despite its rarity.

Since the pandemic began in Ohio, where there are political events, there are men open-carrying assault style rifles — it has been documented at racial justice and anti-quarantine protests alike.

Formal election observers, who can freely move about polls, cannot carry guns or deadly weapons, per guidance from the Secretary of State, and state law prohibits possession of a gun within 100 feet of a poll location.

But weapons anywhere beyond 100 feet and things get murky. A voter can inform the county board of elections of what he or she feels is voter intimidation, but the question remains: Isn’t a person holding an assault-style weapon intimidating?

State law prevents conduct that would “intimidate” voters but does not define the term.

“Outside of 100 feet, I do kind of feel like that is going to be looked at on a case-by-case basis,” said Aaron Ockerman, executive director of the Ohio Association of Election Officials.

At Georgetown University Law School, Mary McCord, who runs the Institute for Constitutional Advocacy and Protection, warned of an “uptick” in militia groups in the U.S., despite that they’re unlawful in every state.

An “organized and coordinated” group of armed people watching the polls is illegal, she said, given it violates statutes, constitutional provisions and case law prohibiting militia groups. If it’s an individual, it raises a host of questions: Are they open-carrying? Is the weapon in a holster?

“It’s important, community by community, to plan in advance,” she said.

State officials were leery of discussing the possibility of unrest on Election Day.

Maggie Sheehan, a spokeswoman for Secretary of State Frank LaRose, declined to answer questions about the DHS report, or what happens if someone chooses to open-carry near (but not within 100 feet of) a poll.

“As I’m sure you’re aware, that’s outside of our jurisdiction,” she said.

A spokeswoman for Attorney General Dave Yost declined to comment on the office’s “preparedness planning process.” A spokesman for the Ohio Department of Public Safety did not respond to inquiries. (State offices were closed Monday for Columbus Day.)

Marc Gofstein, a spokesman for the Franklin County Sheriff’s Office declined to go into specifics of Election Day plans. However, he said they always plan for “contingencies” and that political turbulence of the last four years gives a “template” for what to expect.

At the Franklin County Board of Elections, Aaron Sellers, while declining to go into specifics, said the board works with state and local officials.

However, it’s not such an easy issue, he said. While police officers would conceivably be the ones summoned to respond to alleged voter intimidation from someone with a gun at a polling location, an armed police officer may likewise “intimidate” other voters.

While political violence is not new, it has recently accelerated. In the past six months, men have been shot and killed at political events in Portland, Kenosha and Denver. Police officers were shot at protests in Los Angeles and Louisville as well.

A recent YouGov poll of more than 1,500 respondents found nearly 56% believe “America will see an increase in violence as a result of the election.”

Researchers at Princeton University have gathered data on 10,600 political demonstrations between May 24 and Aug. 22. The vast majority (95%) were peaceful. However, they detected an uptick in militia group appearances, armed individuals, and clashes between protesters and counter-protesters.

Meanwhile, a trail of political, violent crimes or attempts to plan and execute them trace back to Ohio.

The Cincinnati Enquirer reported earlier this month that Williamsburg police are investigating a video circulating on social media of a man seemingly threatening violence if Democratic candidate Joe Biden wins the November election.

“I don’t know if a lot of y’all understand this or not, but come November, there is a war coming,” he said in the video. “The reason why I say there’s a war coming is cuz if Trump wins, Black Lives Matter and all them other Antifa dumbasses are gonna try to start war. We ready, don’t worry. We ready, us rednecks and stuff, we ready for y’all. But if Biden wins, we coming, and we coming strong.”

On Monday, a sergeant with the department told the Ohio Capital Journal the case has been referred to the FBI. An FBI spokesman declined to comment.

In two meetings in Ohio this summer, a group of 15 alleged extremists met to plot an elaborate plan to kidnap Whitmer from her vacation home. They conducted field training exercises, surveilled her house at night, and created and tested an improvised explosive device, prosecutors say, prior to their arrest.

In late May, a man called Democratic House Minority Leader Emilia Sykes from what appeared to be her father’s number. The man claimed he had her father captive and would murder him if she didn’t “step aside” politically.

While circumstances remain in dispute, a man driving in a Trump vehicle parade earlier this month fired a handgun at a semitrailer, the Associated Press reported.

Matthew Paul Slatzer, a self-described neo-Nazi, waved an anti-Semitic sign at a rally outside the Ohio Statehouse in April. He has since pleaded guilty to a federal weapons charge, and been accused in an unrelated incident of entering a Dollar General in Stow with a hatchet and sword seeking directions to Kent State University as there are “a lot of Jews at Kent State.”

A Toledo couple was sentenced in early 2019 for planning a mass-murder terrorist attack in the city’s entertainment district.

While prosecutors didn’t describe the plan as overtly political, they said in court documents that Elizabath Lecron corresponded with Dylan Roof (a white supremacist convicted of murdering nine Black congregants in a Charleston church) asking him for reading suggestions. She went on to send him a book about a book: “The Eastern Front: Memoirs of a Waffen SS Volunteer, 1941-1945.”

“Stay strong, Storm,” she wrote to him. “You have a lot of people that care for you beyond those walls.”

In 2019, Dallas Frazier exited from a pickup truck at a Trump rally in Cincinnati and assaulted an elderly man protesting the rally, punching him repeatedly. He was convicted and sentenced to serve 120 days in jail.