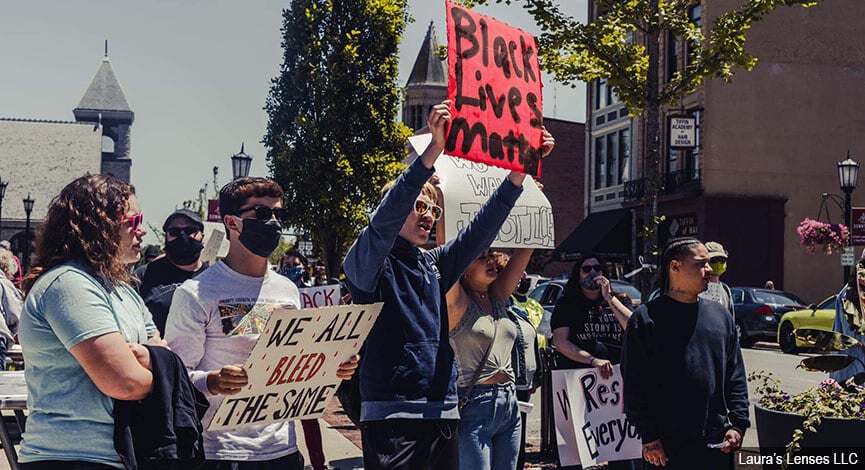 The vast majority of nationwide Black Lives Matter protests have been peaceful, including those in Ohio, according to a new study by the Armed Conflict Location & Event Data Project (ACLED).

The ACLED has been collecting data on demonstrations, political violence and other related developments since the newest phase of the BLM movement began in May, sparked by George Floyd’s death at the hands of Minneapolis police officers.

“Between 24 May and 22 August, ACLED records more than 10,600 demonstration events across the country. Over 10,100 of these — or nearly 95% — involve peaceful protesters,” the ACLED study reads. “Fewer than 570 — or approximately 5% — involve demonstrators engaging in violence.”

The study adds that more than 7,750 of the total demonstrations are connected to the BLM movement, spanning more than 2,440 locations in all 50 states and Washington, D.C. More than 93% of those events have been peaceful protests.

In Ohio, there have been 400 demonstrations across the state documented between May 24 and Sept. 5. Of those, 79.8% have been associated with the BLM movement — and 95.57% of those have been peaceful while 4.43% have had violence, looting or vandalism on the part of demonstrators.

The majority of protests have been focused in Cleveland, Cincinnati and Columbus and surrounding areas.

This data lies in stark contrast with many Americans’ perception of the BLM movement. According to a recent FiveThirtyEight poll, 42% of respondents believe “most protesters [associated with the BLM movement] are trying to incite violence or destroy property.”

The ACLED argues that this misperception is brought about “political orientation and biased media framing,” a disparity that is backed up by recent research from the University of Washington.

Instances of BLM protests becoming violent without being prompted by escalation from police have been rare, the study said. Counter-protests and other opposing actions to the BLM movement have tended to be more violent than the protests themselves, with about 8% turning violent, it shows.

“The initial government response to the demonstrations was not uniform. Many early protests were held peacefully and without incident,” the report said, pointing to cases where police officers met and even marched with protesters, which occurred in Columbus. “In some cases these efforts reduced tensions between the community and the police, while in others demonstrators raised concerns that these displays served more as ‘PR stunts’ than genuine acts of solidarity, potentially obscuring the scope of police abuse.”

Overall, ACLED data indicate that government forces soon took a heavy-handed approach to the growing protest movement, the report said. In demonstrations where authorities are present, it said, they use force more often than not. Furthermore, it said, data show that police have disproportionately used force while intervening in demonstrations associated with the BLM movement, relative to other types of demonstrations.

“These data reveal that the United States is in crisis. It faces a multitude of concurrent, overlapping risks — from police abuse and racial injustice, to pandemic-related unrest and beyond — all exacerbated by increasing polarization,” the report reads, adding that the intersecting risks are likely to intensify as the upcoming 2020 election grows near.

That combination of concurrent risks and polarization most recently led to debunked rumors of left-wing violence causing some residents of Oregon to refuse law enforcement orders to evacuate their homes, leaving them vulnerable to approaching swaths of forest fires blazing on the West Coast.