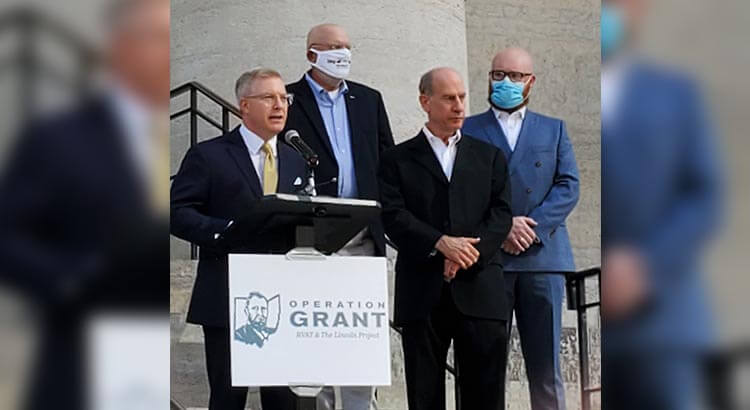 One speaker after another offered a scathing rebuke of Donald Trump.

The president is an “incompetent sociopath.” He uses “vile and despicable language.” And he’s the wrong leader in these “dangerous times.”

These comments did not come from Democrats and liberals, but rather from a group of lifelong Republicans who are straying from the party line this November. Standing Thursday morning on the Ohio Statehouse steps, the group urged other Republicans to do the same.

The speakers make up a new group called Operation Grant, a collection of Republicans working to elect Democratic presidential candidate Joe Biden over Trump this fall. The effort is named after the 18th president, Ohio native Ulysses S. Grant, and reflects a foray into the battleground state by two national groups with a similar agenda, Project Lincoln and Republican Voters Against Trump.

They believe Republican office-holders who support Trump are enablers. When and if Trump loses the General Election, those with Operation Grant plan to turn their attention to them.

“(Trump’s) enablers need to lose, too,” said Phil Heimlich, a Republican who has served as a Cincinnati councilman and Hamilton County commissioner. “There needs to be a complete cleansing in the Republican Party.”

This would seem to include the bulk of Ohio Republican elected officials. Five of the six statewide office-holders, including Gov. Mike DeWine, are honorary co-chairs to Trump’s reelection campaign. Joining them are all 12 Republican members of the U.S. House of Representatives from Ohio, along with U.S. Sen. Rob Portman and Ohio Senate President Larry Obhof.

Operation Grant supporters are in the minority among Republican voters. A poll of likely voters conducted by CBS News in July found that 88% of Ohio Republicans planned to vote for Trump. Just 6% planned to cast a ballot for Biden.

Despite that widespread Republican support for Trump, those with Operation Grant believe it is Trump who does not reflect the party’s values. Heimlich said Trump is not a “real Republican.” Tyler Ferhman, a self-described “lifelong conservative Republican” who served as the whistleblower in the Larry Householder investigation, said Trump is not representative of the “true” Republican Party.

“We are not RINOs,” said speaker Chris Gagin, referring to the phrase Republicans In Name Only. “We are principled conservatives.”

Gagin made headlines in 2018 when he resigned as Belmont County Republican Party chairman in protest of Trump’s policies. He said his support for Operation Grant was an effort to put principles over loyalty.

Another featured speaker was Rocky Saxbe, a former Republican state representative who said he joined Operation Grant to persuade those in his party to switch their vote to Biden.

Operation Grant previously held a press conference in Cincinnati and there are plans for an upcoming event in Cleveland, organizers said.

Various polls of Ohio voters have reported each candidate having a slight lead over the other; Biden led 49-45 in a Rasmussen poll of 1,000 likely voters from early September, while Trump led 50-45 in a poll conducted by Morning Consult.

Donald Trump Jr. recently spoke to hundreds of supporters in Lima and Trump surrogate Kristi Noem, the governor of South Dakota, spoke at a Women for Trump event in Westerville.