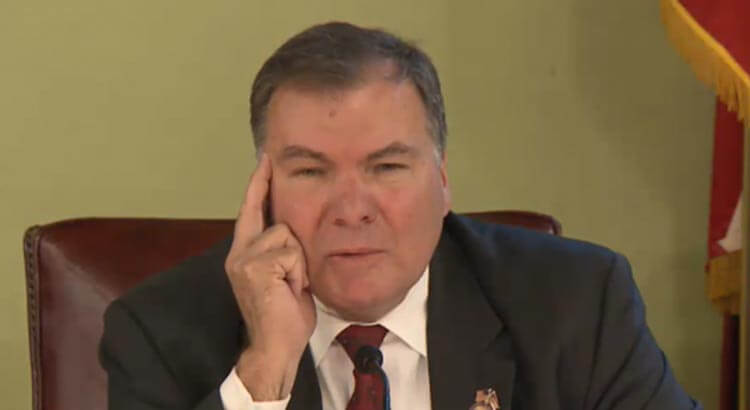 A bill sponsored by Ohio Senate President Larry Obhof to bar public officials from closing down licensed firearm dealers passed through committee on Tuesday, but not without questions on the priorities of the legislature.

The bill, which bans elected officials from closing down federally-licensed firearm dealers as part of an emergency such as a health crisis, passed the Government Oversight & Reform Committee along party lines. However, the head of a statewide pro-gun group spoke up to say the bill was a “solution in search of a future problem.”

“We have a current problem in Ohio, where we have gang-bangers and thugs and criminals and burners and looters and shooters and all kinds of criminals who are willing to throw off the bounds of law at the drop of a hat, and as a result endanger law-abiding gun-owners and peaceful citizens all across this state,” said Chris Dorr, head of Ohio Gun Owners.

Dorr frequently testifies in support of pro-gun measures in the Ohio legislature, but most recently has been outspoken on the stand-your-ground bill that is still being considered in the state Senate.

That law should be the priority, instead of proactively passing laws on future problems, he said.

Committee chairman, state Sen. Bill Coley, R-Liberty Township, took issue with Dorr’s representation of legislator’s priorities as Dorr said he would approve the measure as an amendment to the stand-your-ground bill.

“You come off and you start making comments about the intention of legislators who are introducing this bill, when those same legislators saw election polling places shut down, they saw other businesses shut down and they didn’t believe that was correct,” Coley said on Tuesday. “And instead, they want to make sure they are proactive so that in a future emergency, everybody’s rights and obligations are clear under…the Ohio Revised Code relative to federally licensed firearms dealers.”

Dorr rebutted, saying stand-your ground law “would send a big fat message to the criminal class that this caucus or this chamber stands for law and order.”

State Sen. Hearcel Craig, D-Columbus, brought up two amendments which were both tabled along party lines. One amendment urged increased implicit bias training within law enforcement, and another sought to restore local government funds, which support police departments and fire departments among other things, to 2011 levels, before the 2012 and 2013 budget slashed the fund by half.

“By restoring the LGF, we are uplifting our local communities and allowing them to have budgets that reflect the needs of each individual community,” Craig told the committee.

The amendment was tabled without further discussion, with the exception of Chair Coley commenting on casino revenues from which local governments benefit.

“I do note that the local governments never complain about the $100 million a year that we give away in free promotional play,” Coley said.

The sponsor of the bill, state Sen. Theresa Gavarone, R-Bowling Green, has said diverting funds from law enforcement “even one dollar is too much.”