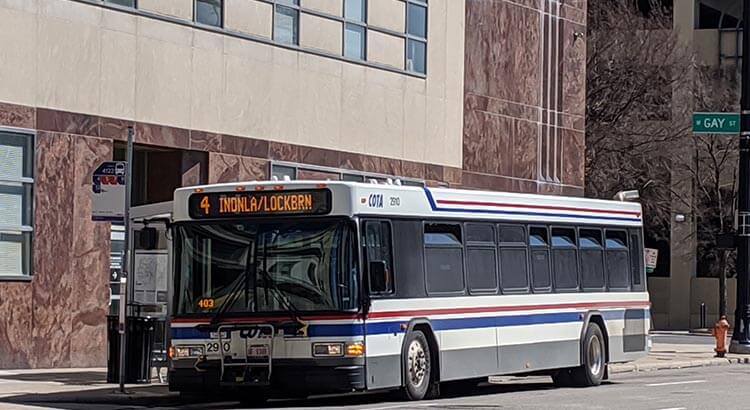 Why don’t we invest in sustainable transportation (rail, bike, public transportation) at rates comparable to our neighboring states?

Answer: There is a lot of money spent on transportation in Ohio, but it does not necessarily come from state sources. Public transit advocates hope to see the state invest more in the coming years.

To help answer this question, the Ohio Capital Journal reached out to a few public transportation advocates and to Matt Bruning, the press secretary for the Ohio Department of Transportation (ODOT).

Let’s first lay out where Ohio stands on public transportation funding. The projects and systems in operation here are funded through a variety of local, state and federal sources.

Historically, the Buckeye State spends less per capita on public transit than other states. Back in 2012, we were in the bottom 10 nationwide in that statistic — trailing all our neighbors except for Kentucky.

In comparison, Pennsylvania spent more than $400 million per year on public transportation between 2007 and 2017, while Michigan spent over $250 million in FY 2019.

Bruning noted that the decision was made in Ohio decades ago to pay for transit “primarily at the local level, not through state revenue.”

“Instead of providing operating funding, ODOT works hand-in-hand with transit agencies and the Ohio Public Transit Association (OPTA) to secure federal grants and other funding sources to help augment the local funding solution,” he said.

For example, the GoBus system offers bus transit between various Ohio cities, including Cincinnati, Cleveland, Columbus and Athens. It is paid for by federal funding to the Rural Intercity Bus Program.

The Central Ohio Transit Authority, which operates bus travel throughout the Columbus area, is mainly paid for by local sales tax revenue. It also earns money from passenger fares and other government grants.

While there have been millions of dollars in cuts made this year due to COVID-19, Bruning said state funding for public transit is still higher now than in previous years.

What does the state money for public transportation go toward?

One major area is the Ohio Transit Partnership Program, which divvies up millions of dollars to local transit agencies in both rural and urban communities. A month ago, more than $30 million in grants was awarded to dozens of agencies across the state to pay for new vehicles, operating assistance and maintenance.

There were many other agencies which applied and did not receive funding. In a news release, OPTA President Claudia Amrhein said this shows even more funding from the legislature is needed.

“(T)he demand for these funds clearly demonstrates that even at current funding levels some needs are going unmet,” Amrhein said. “OPTA urges the legislature to ensure the people of Ohio have access to safe, affordable, and dependable public transportation through dedicated funding.”

Stu Nicholson, the executive director of the transportation advocacy group All Aboard Ohio, echoed a similar sentiment about the need for dedicated funding.

“We’re better than where we were,” he said about the recent increase in state funding.

But Nicholson is quick to point out this investment comes out of general revenue funds, which he said subjects it “to the political winds of the Statehouse.” He’d like to see a more “dedicated source of funding,” such as how Ohioans pay a gas tax to benefit road and bridge construction.

“What you have to do is peel the onion back on its core,” Nicholson said. “In Ohio, there is no dedicated funding source for anything other than highways. It’s been this way since the 1950s.”

This makes it difficult to begin building up additional transit systems in Ohio, he claimed, “because there’s no certainty there.”

Transit supporters say former Gov. John Kasich bears much of the blame for the lack of public transportation investment in recent years.

A decade ago, the federal government offered $400 million toward building a “3C” rail line that would have connected Cleveland, Columbus and Cincinnati. Kasich campaigned for governor in 2010 on a platform of killing the project, and that he did when he won election over incumbent Democrat Ted Strickland.

The feds re-invested the $400 million elsewhere, and the momentum for building such a system has largely stalled.

“There are some people who will never be convinced,” Nicholson told me. “I think John Kasich was one of them.”

For advocates like Nicholson, this means having to keep working to convince other state leaders of the value in supporting public transportation. He points to the clear value in providing affordable, reliable transit access to education, health care and tourism destinations.

If that isn’t enough, Nicholson will note the way public transit opens the doors for economic opportunities — for employees and employers alike. He noted that Amazon, in its search for a second headquarters (“HQ2”), wanted a city with adequate public transportation in order to reach a larger potential workforce.

Angie Schmitt is a Cleveland-based writer and researcher who recently published the book “Right of Way: Race, Class, and the Silent Epidemic of Pedestrian Deaths in America.” She believes there are socioeconomic factors at play in how governments approach what infrastructure systems to invest in, and where they are built.

In her view, Ohio’s government does not adequately support urban development. Officials “really just consider themselves highway builders and think of this other stuff as someone else’s responsibility,” she said.

Bruning pointed to a number of other programs the state is involved with. ODOT also administers the Transportation Alternative Program, which pays for community improvements such as sidewalks, multi-use trails and bike lanes, and the Ohio Department of Natural Resources administers various grant programs to benefit outdoors projects such as bike paths.

“These are just a few examples of how ODOT supports more than just roads and bridges in our state,” Bruning said.

How will public transportation spending fare in the years to come?

Part of that may depend on the financial fallout related to COVID-19. We can expect the debate over transportation spending to pick back up again at the start of the next Ohio General Assembly in 2021.

If you want to read more about public transportation in Ohio, one of the first Capital Journal stories we ever published detailed one such rail system proposal from a self-described “data nerd.” Kevin Verhoff’s plan involves seven different rail lines being built all throughout the state.

Here are some other important and interesting Ohio Capital Journal articles you may have missed:

DeWine breaks from controversial CDC guidance on coronavirus testing – Should asymptomatic people who have been exposed to the virus get tested? It depends on who you ask, Jake Zuckerman reports.

Education associations say teacher evaluations illogical in COVID-19 school year – Teaching during a pandemic is difficult enough, and some think teachers should be given a break from their annual evaluations, Susan Tebben reports.

GOP lawmaker wants to see if DeWine can be criminally charged – Ohio Rep. John Becker believes Gov. DeWine broke the law with his coronavirus response, I reported this week, and has asked a legislative research group to review the matter.