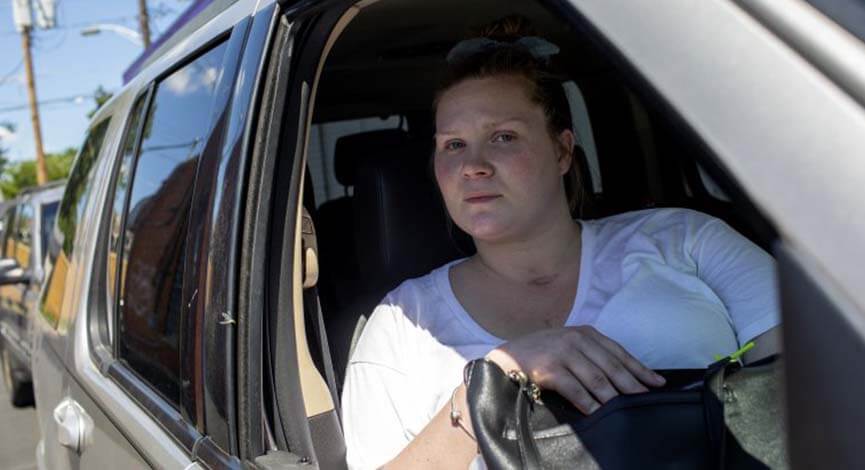 Crystal Hererra, 30, sits for a portrait in the passenger seat of her husband’s car as they wait in the drive-through pickup area of the All People’s Fresh Market food pantry in Columbus, Ohio on July 28, 2020. Hererra’s husband has been receiving the $600 weekly unemployment bonus subsidy that has been helping to support Crystal and their five children. She is unsure how they will be able to survive now that it's ended. (Brooke LaValley / Ohio Capital Journal)
ShareTweet

New economic research indicates that the economic impact of coronavirus was mitigated to some extent by this spring’s robust governmental response. But there are a number of indications that things still were bad and are growing rapidly worse.

Going into the pandemic, official statistics say poverty had been decreasing, with the U.S. Census Bureau reporting last week that the 2019 poverty rate had dropped 1.3 percentage points from a year earlier.

But Rob Moore, of the policy-analysis group Scioto Analysis, said the federal poverty rate can be deceiving.

But the economy has changed over the past half-century.

Even if you concede that it’s a faulty measure, some economists found that in the early months of the pandemic fewer Americans were plunged into hardship as many experienced job losses.

In a Brookings Paper on Economic Activity in June, Jeehoon Han and Bruce D. Meyer of the University of Chicago and Notre Dame economist James X. Sullivan found that poverty had fallen and incomes among poor people had risen. A big reason for that, they determined was that federal coronavirus relief — which included stimulus checks and a $600-a-week federal unemployment supplement — had alleviated the worst of covid’s effects.

“Our results indicate that at the start of the pandemic government policy effectively countered its effects on incomes, leading poverty to fall and low percentiles of income to rise across a range of demographic groups and geographies,” they wrote. “Simulations that rely on the detailed (census) data and in aggregate closely match total payments made show that the entire decline in poverty that we find can be accounted for by the rise in government assistance including unemployment insurance benefits and the economic impact payments.”

However a more recent analysis by economists at some of the same institutions indicates that as many of those federal benefits began to expire in July, poverty began to go back up.

But perhaps a better measure of poverty is the rate of food insecurity — the percentage of people who are worried they won’t have enough to eat. Moore said that measures not only peoples’ current economic situations, it also measures their expectations for the future.

One measure of that can be gleaned from the U.S. Census Household Pulse Survey.

Last week it released estimates based on data collected from Aug. 19-31.  They indicated that nearly 826,000 Ohioans sometimes or often did not have enough to eat over the past seven days. The estimate for data collected between July 16 and 21 — before federal supplements expired — was 673,000, or a 23% increase in food insecurity in a month.

More disturbingly, three leading poverty economists this month published a paper with the National Bureau of Economic Research saying that rates of food insecurity have nearly tripled during the pandemic despite federal relief assistance.

The authors, Marianne Bitler, Hilary W. Hoynes, Diane Whitmore Schanzenbach, used responses to a question in the National Health Interview Survey. It asked people whether over the past 30 days it was never, sometimes or often true in their households that  “The food that we bought just didn’t last, and we didn’t have money to get more.”

The percentage of  families with children saying that was often or sometimes true jumped from 13% in 2018 to 34% in April 2020.

As causes, the authors cited the increasing cost of food during the pandemic. They also cited how slowly unemployment and other resources reached families with nothing to fall back on, the fact that many fell through gaps in the programs and that relatively stingy safety-net programs in the United States for decades have focused heavily on work.

The authors of the study credited the federal government’s early pandemic relief for alleviating much suffering of poor Americans, but they said, “Even with these valuable policy responses, there is still tremendous unmet need. Food insecurity has sharply increased, as has the share of families relying on emergency food pantries.”

This article was re-published from the Ohio Capital Journal under a Creative Commons license. Read the original story here.