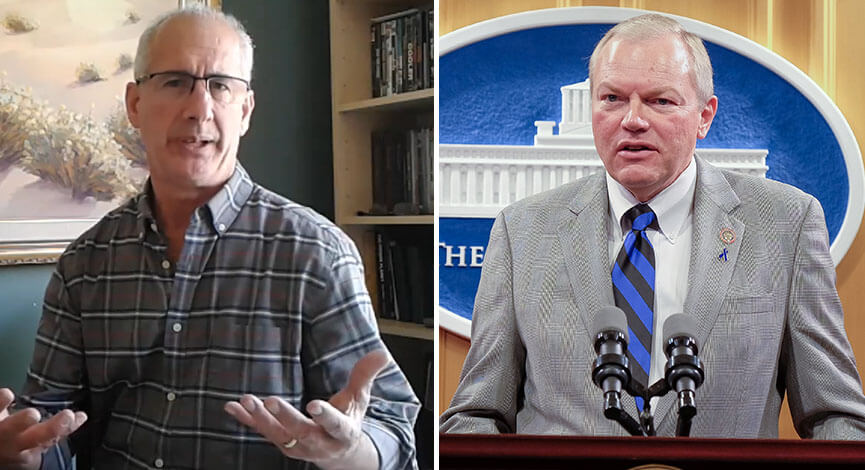 Former Ohio House Speaker Larry Householder (R-Glenford) and four political operatives — Matt Borges, Neil Clark, Juan Cespedes and Jeffrey Longstreth — all face racketeering charges and are accused of participating in a $61 million bribery scheme in order to get a $1.3 billion nuclear bailout bill, known as House Bill 6, passed into law to benefit the former FirstEnergy Solutions. The scheme is being described as the largest corruption scandal in Ohio history.

Householder, who has been ousted from his post as House Speaker but remains a state representative, returned to the Statehouse on Tuesday to vote on legislation.

“[Householder] is back to business as usual. He says he’s going to represent his district, and the issues and everything else, but he can’t have any contact with people that may or may not be potential witnesses in connection to the case. Well, that includes just about every one of his Republican counterparts, his colleagues, in the Ohio House. Including my opponent, Bill Reineke, who took FirstEnergy money,” Swartz said in the video posted to his campaign Facebook page. “Only two Ohio legislators, two Republican legislators, have said they’re going to return their PAC money from FirstEnergy. Give it to charity, or whatever. Bill hasn’t done that yet. Still waiting on that one, Bill.”

“Back to Larry Householder. Now, here’s a guy that according to DeWine, well he has every right to be back at his job. He may have every right, but he doesn’t have any decency. The guy should’ve resigned,” Swartz said. “His Ohio House colleagues should’ve voted him out, they had every right to do that, and they didn’t. No spine whatsoever from these guys. This is the corruption.”

“This is what I get really excited about, as you can tell. What you should be getting excited about as voters. And come this November, it’s time to put a stop to this kind of nonsense. The super-majority, the Republicans in Ohio, have been running this ramshackle of a General Assembly for 20-some years in the House and even longer in the State Senate. This is time to end this,” Swartz said in the video.

Swartz and Reineke are facing off in the November general election for the 26th district State Senate seat alongside write-in candidate Robert Taylor of Bucyrus. Reineke is currently serving his third term in the Ohio House, representing the 88th House district, which includes all of Sandusky County and the majority of Seneca County.