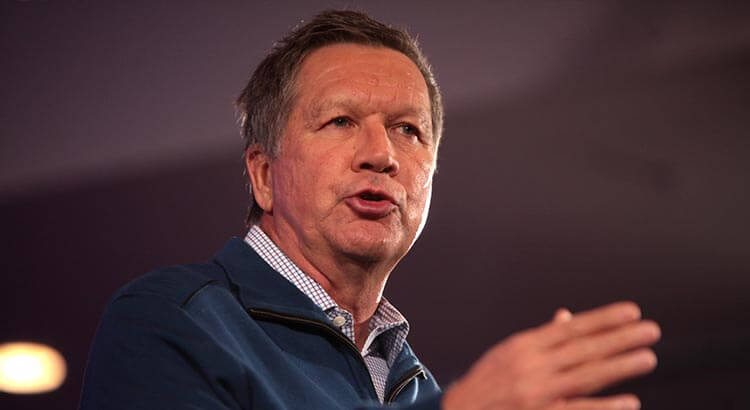 The news of former Republican Gov. John Kasich being invited to speak at the Democratic National Convention turned quite a few heads.

It now appears Kasich will be the only Ohio politician to speak at the virtual convention — at least, during the prime-time hours.

The DNC is scheduled for Aug. 17-20, with a slate of speakers planned for each evening. The schedule released this week shows Kasich will speak on Monday, the opening night. He is the only Ohioan to appear on any of the featured guest lists.

With the convention being held through virtual means, the speaker list in 2020 is cut down significantly from past conventions. As announced, there are a half-dozen or so speakers planned for each night from 9-11 p.m.

Kasich served two terms as the Republican governor of Ohio, and campaigned president in the 2016 cycle. Inviting Kasich to speak at the opposing party’s national convention, while unconventional, is part of an effort to widen Democratic nominee Joe Biden’s electoral base in the General Election. Kasich is among the most prominent Republican critics of his party’s top leader.

I will be speaking at the #DNC Convention because I believe that America needs to go in a different direction.

I’ve searched my conscience and I believe the best way forward is for change – to bring unity where there has been division. And to bring about a healing in America. pic.twitter.com/sfnBGBF3kG

The Ohio Capital Journal reported in July that Kasich’s 2010 gubernatorial rival, former Gov. Ted Strickland, supports the invitation if it ultimately means Biden wins Ohio and gets Trump out of office.

Strickland, a 2012 DNC speaker, said about the news: “If John Kasich is willing to speak up and lend his voice, then that’s good.”

The exact time of Kasich’s speech has not yet been announced. He will join former First Lady Michelle Obama, U.S. Sen. Bernie Sanders, I-Vermont and several others on the first night, which has a “We the People” theme.

The Republican National Convention is scheduled for Aug. 24-27 and will also be primarily conducted online due to the pandemic. A speaker list has not yet been announced.